Umar Gul takes Pakistan past SA in a thriller

Umar Gul emerged the unlikely batting hero as Pakistan came back from the dead to pull off a nerve-wracking two-wicket victory over South Africa in their opening Super Eights match of the ICC World Twenty20 in Colombo on Friday.

Chasing a target of 134, on a difficult Premadasa strip, Gul produced a blistering 17-ball 32 while Umar Akmal scored an unbeaten 43 to guide the team to a thrilling victory with two balls to spare.

Needing nine off the last over, Akmal pulled Morne Morkel for a six before Saeed Ajmal steered one through the vacant third-man region to win it for Pakistan, who were at a precarious 76 for 7 in the 15th over.

Credit should go to Gul, who smashed four huge sixes totally against the run of play to get Pakistan back in the match. 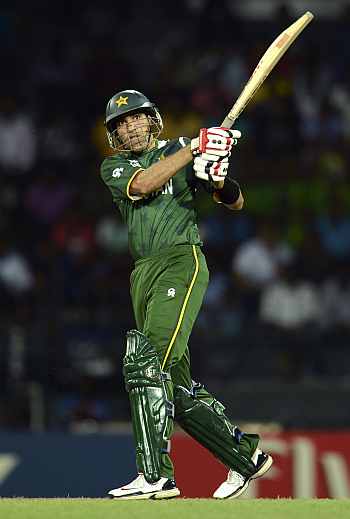 Gul's knock was crucial in the context of the match after South African spinners Robin Peterson and Johan Botha bowled brilliantly to set it up for AB de Villiers's men.

Gul was named Man-of-the-Match for his batting after being introduced to bowl in the 18th over of the South African innings.

The low and slow nature of the Premadasa track, with the odd-ball turning a fair bit, added to the batsmen's woes in both innings and that makes Akmal's innings even more valuable.

After Pakistan's spinners displayed their prowess, it was the turn of Peterson and Botha, who were equally effective as they restricted the 2009 champions to 37 for four within the first seven overs.

Peterson was most economical with figures of two for 15 in only four overs.

Dale Steyn started it all with a short ball that climbed late on Imran Nazir and his mistimed hook shot lobbed for AB de Villiers to take a simple catch.

Peterson then dismissed rival skipper Hafeez with a classical left-armer's delivery. Even after being hit for a six off the previous delivery, Peterson enticed the batsman with another flighted ball which pitched and turned a shade to beat the bat and was stumped. Hafeez scored 15 off nine balls.

Peterson's other wicket was also courtesy a stumping. He pushed this one angularly and faster through the air as it beat charging Nasir Jamshed's bat.

Kamran Akmal tried to go for a non-existent cut shot when Botha had hardly provided him with any room. At 37 for four, the writing was on the wall.

Shoaib Malik, Shahid Afridi and Yaser Arafat departed in quick succession, but Gul made batting look easy on a surface where spinners were ruling the roost.

Steyn (3/22) complemented the spinners by bowling in the right areas as Pakistan lost wickets at regular interval although Akmal and Gul had the last laugh in the end.

Earlier, Pakistan skipper Hafeez had impressive figures of two for 23 while Saeed Ajmal conceded only 26 runs in his four overs while taking the wicket of Richard Levi, as A B de Villiers's decision to bat first backfired badly. Left-armer Raza Hasan and leg spinner Shahid Afridi too were economical.

Jean-Paul Duminy, with a useful 48 off 38 balls, was the only South African batsman who was able to play a responsible innings. He struck two sixes and two fours. His 44-run partnership for the fifth wicket with skipper De Villiers, who contributed 25, helped South Africa reach a total which had some respectability.

After Hashim Amla was dropped by Kamran Akmal off left-arm spinner Raza's bowling, the world's premier batsman couldn't cash in on the opportunity as he offered a catch to Shoaib Malik in covers after Arafat had bowled a slower delivery. Amla scored only six.

The dangerous Levi was the next man out after scoring only eight off nine deliveries when he went for an ugly reverse sweep to get bowled round his legs.

The slowness of the pitch increased the woes of the Proteas, who found it increasingly difficult to hit the big shots. Even young Raza was difficult to get away as he gave only 12 runs in his three overs, including a maiden.

Jacques Kallis was frustrated during his stay in the middle and finally offered a tame catch to Afridi at cover region.

Rookie Farhan Behardien scored 18 off 21 balls but was stumped by Kamran Akmal when he danced down the track to a Hafeez delivery.

Duminy and De Villiers found it difficult to get the big shots going and concentrated on taking singles. When Gul was finally brought on in the 18th over, De Villiers swung his fuller delivery over deep mid-wicket for a six but lost his wicket in the very next ball, offering a simple skier off a juicy full-toss to fielder at deep point. 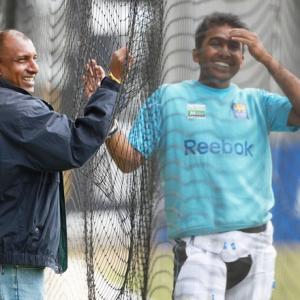