# Mahela Jayawardene has taken 80 balls to reach his hundred -- the quickest by a Sri Lankan in the World Cup, surpassing Sanath Jayasuriya's 85-ball hundred (109 off 87 balls) against Bangladesh at Port of Spain on March 21, 2007.

# Jayawardene's 80-ball century is the fourth fastest in the history of the World Cup, next only to Matthew Hayden -- 66 balls for Australia against South Africa at Basseterre on March 24, 2007, John Davison -- 67 balls for Canada against West Indies at Centurion on February 23, 2003 and Adam Gilchrist -- 72 for Australia against Sri Lanka at Bridgetown on April 28, 2007.

# Jayawardene became the second batsman to post a World Cup hundred in Sri Lanka. Aravinda de Silva was the first to register the feat, scoring 145 off 115 balls against Kenya at Kandy on March 6, 1996.

# Kumar Sangakkara's superb 92 off 87 balls is the highest by a skipper in a World Cup game in Sri Lanka, bettering the 75 not out by Arjuna Ranatunga against Kenya at Kandy on March 6, 1996.

# Sangakkara has recorded his highest innings as captain in ODIs, surpassing the 90 against India at Rajkot on December 15, 2009. 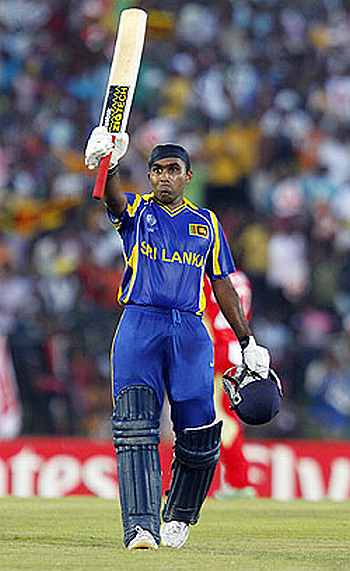 # Sangakkara's 60th fifty in ODIs is his 12th as skipper in 36 innings. The said innings is also his highest in the World Cup, eclipsing the 76 off 83 balls against Bermuda at Port of Spain on March 15, 2007.

# Jayawardene has received 16 MOM awards in ODIs -- his third in the World Cup -- one each against New Zealand, Bermuda and Canada.

# Sangakkara, with four dismissals, has completed his 350 dismissals -- 279 catches and 71 stumpings.  His tally includes 260 catches as a wicketkeeper and 19 as a fielder.

# Sri Lanka's 210-run win is their second biggest by runs margin in the history of the World Cup. The said victory is the seventh largest in terms of runs in the World Cup.

# Sri Lanka (332/7) have posted their second highest total in ODIs in Sri Lanka -- their highest being 398 for five against Kenya at Kandy on March 6, 1996.  These are Sri Lanka's top two totals in the World Cup as well.

# Muttiah Muralitharan, with two wickets against Canada has emulated Wasim Akram's world cup tally of 55 at 23.83 runs apiece in 38 matches. Muralitharan's present tally is 55 at 19.67 runs apiece in 32 matches and only Glenn McGrath (71 at 18.19 in 39 matches) has bagged more wickets than Akram and Muralitharan in the World Cup.

# Canada enjoys a winning percentage of 7.69 in the World Cup -- one win and twelve losses out of 13 played.

# Rizwan Cheema (37 off 35 balls) has recorded the highest individual score for Canada against Sri Lanka in ODIs.

# Nuwan Kulasekara (3/16) has registered his best bowling performance in the World Cup. He had failed to bag a single wicket against Australia and Ireland in the last edition of the World Cup.

# Sangakkara and Jayawardene were involved in a stand of 179 for the third wicket - Sri Lanka's third highest for this wicket-position in the World Cup. The top two partnerships have also been registered for the third wicket for Sri Lanka -- 183 between Aravinda de Silva and Asanka Gurusinha against Kenya at Kandy on March 6, 1996 and 183 between Sanath Jayasuriya and Mahela Jayawardene against West Indies at Providence on April 1,2007.

# The aforesaid partnership is the highest by any pair against Canada in a World Cup game, outstripping the 142 for the first wicket between Stephen Fleming and Lou Vincent for New Zealand at Gros Islet on March 22, 2007. 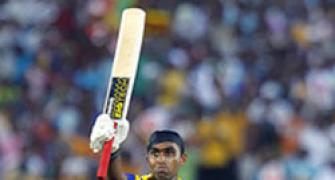 A second Cup ton for Jayawardene 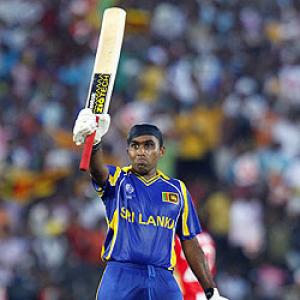