Mahela Jayawardene scored the fastest century by a Sri Lankan in the history of the World Cup as the hosts crushed a hapless Canada by 210 runs to open their campaign in the mega event in grand style, in Hambantota, Sri Lanka, on Sunday.

Riding on Jaywardene's 81-ball 100 and skipper Kumar Sangakkara's 87-ball 92, Sri Lanka rattled up a huge 332 for seven after winning the toss and then skittled out the minnows for just 122 with 13.1 overs to spare.

Canada were never in the chase after losing three wickets in the first four overs with the score on 12, as the Lankan bowlers toyed with the Canadian batting line-up at the Mahinda Rajapaksha International Cricket Stadium.

Rizwan Cheema (37) was the top-scorer for Canada as only four of their batsmen could mange scores in double digits. 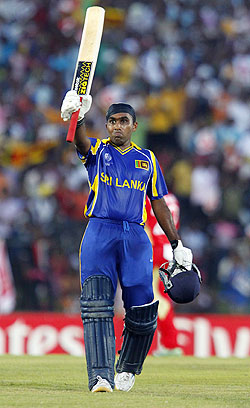 Skipper Ashish Bagai was the only other batsman who defied the Lankan bowlers to some extent as he made 22 runs off 47 balls.

The Lankan pace duo of Nuwan Kulasekara (3/16) and Thisara Perera (3/24) rocked the Canada top order with a fiery opening spell and shared six wickets between them to contribute in the team's easy win.

Spin ace Muttiah Muralitharan, who stifled the Canadian innings in the middle overs along with colleague Ajantha Mendis and part time slow bowlers, took two wickets at the expense of 38 runs in nine overs.

Earlier, the experienced duo of Jayawardene-Sangakkara scored briskly and added 179 runs in just 22 overs for a third-wicket stand that put the hosts -- who surprisingly left out express bowler Lasith Malinga from the final eleven -- in the driver's seat.

Jayawardene, who had 671 runs from 25 World Cup matches before Sunday, got out after reaching his 12th ODI hundred. Sangakkara on the other hand was a little unlucky to have missed the landmark by just eight runs.

While Jayawardene's ton came through nine boundaries and a six, Sangakkara found the fence seven times and cleared it once during their 179-run association, a commendable effort considering the sluggish pitch and the long boundaries.

A boundary off Cheema signalled Jayawardene's intentions, who looked all at ease during his stay at the crease.

The elegant right-hander then hit Jimmy Hansra for a four in the 26th over, before Sangakkara whipped one off the same bowler over wide mid-on for a boundary.

The Sri Lankan skipper reached his fifty in style, pulling Harvir Baidwan over the infield for a four.

At the start, Dilshan launched Sri Lanka's innings in a style so typical of him.

The dashing Sri Lankan opener began with an awkward boundary off Henry Osinde and then thumped Khurram Chohan's innocuous half-volley through extra cover for a similar result.

Chohan was again at the wrong end of Dilshan's onslaught when the opener, after a brief interruption due to sightscreen problems, smashed a length ball through the covers.

Even as Dilshan continued to dominate the relatively inexperienced Canadian attack, his opening partner Upul Tharanga (19) got into the groove with an off-drive off Chohan but fell after getting a start, thanks to a horrible mix-up between the two batsmen.

Thanks to Dilshan, Sri Lanka scored 54 runs without losing a wicket in the mandatory Powerplay, the 50 coming in 9.3 overs. The next Powerplay, though, proved to be fruitful for Canada who conceded just 19 runs while taking a wicket.

A short ball from Baidwan in the 14th over, helped Dilshan join the ODI 5000-run club. The bowler landed one outside off stump and Dilshan was on it in a jiffy, cracking it through the off side.

Dilshan holed out to deep cover while trying to go for one too many. Cheema landed one short and outside off, and a gleeful Dilshan went for it but failed to clear deep fielder.

His departure, however, did not slow down Sri Lankan progress as Jayawardene and Sangakkara kept the scoreboard moving at a healthy pace.