'The BCCI is -- and always has been, across successive dispensations -- allergic to criticism.'
'It has used the 'control' it enshrines in its name to destroy anyone who has dared to point fingers at its functioning,' says Prem Panicker, the distinguished cricket writer. 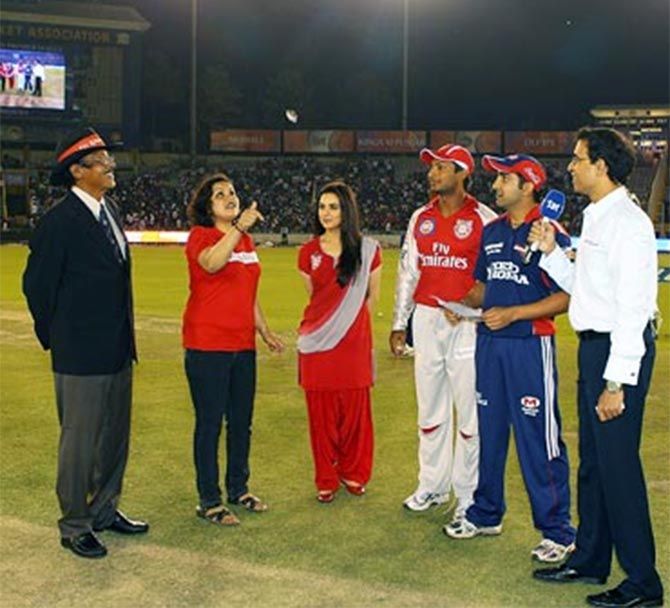 IMAGE: Harsha Bhogle, right, at the toss before an IPL game between the Kings XI Punjab and the Kolkata Knight Riders.

'Even in regard to cricket commentary, games organised by the BCCI have a contractual condition that there can be no criticism of the BCCI or its selection process, thereby curtailing an exercise of free speech. Objective commentary ought to be permitted about everything connected to the match, allowing the commentators to express themselves freely and objectively.'
-- From the Report of the Supreme Court Committee on Reforms in Cricket

Brevity was the soul of the latest news item from the cricket world: Commentator Harsha Bhogle had been unceremoniously axed from the ongoing 9th edition of the Indian Premier League.

It was unusual in that it was so unexpected. In December, Bhogle had conducted the auction ahead of this edition. His face and voice had been extensively used in promotional videos for the event. His duty roster for the tournament had been prepared, his flight tickets and hotel rooms had been booked.

All systems were go. And then, suddenly, arbitrarily, he wasn't going. Last evening, while the Delhi franchise was making a mockery of its soi disant tag of 'daredevils,' Harsha and his wife Anita watched a movie in a Mumbai theatre.

Shashank Manohar, who after a barnstorming start to his second innings as BCCI president, has added invisibility to his accomplishments, had no comment to make. Secretary Anurag Thakur -- who in contrast to his nominal chief is now omnipresent and omnipotent in cricket affairs -- refused to comment as did IPL Cchairman and Indian cricket's eternal survivor Rajiv Shukla.

And Harsha -- in the interests of disclosure, a personal friend of 25 years standing -- had no clue. "No one has told me anything, given me any reason," he said when we spoke last night. "Maybe I'll know something tomorrow. I hope..."

Into that informational vacuum, 'Enter rumour, painted full of tongues.' 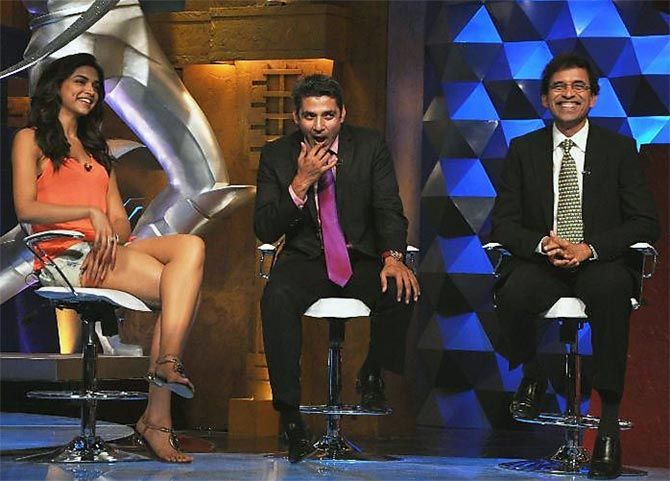 Thus, it is supposed that ‘T2184’ aka Amitabh Bachchan's call for jingoism in the commentary box (which he followed up with 'fed up ho gaye yaar' and 'jab dekho unki tareef karte rehte hain ... and 'it's the limit yaar' among other comments), was the proximate cause -- more so since his strictures had the tacit endorsement of India's T20 captain M S Dhoni.

What could have been passed off as a generic remark on commentators, plural, acquired a pointed edge when Bachchan played the 'mujrim kaun?' game. Not Sunil Gavaskar, he said, with a spray of exclamations for emphasis. Not Sanjay Manjrekar either, he hastened to clarify.

As befits a putative President, he occupied his version of the high moral ground and refused to name who he was talking about, allowing his myriad fans to arrive at their own conclusions through the game of elimination he was happy to indulge them in. Typical of a certain category of Twitter 'influencer' who finds innuendo far more powerful than straight talk.

Adding fuel to that speculation was the predictably unnamed 'senior BCCI official' who said the Board 'monitors social media reactions.' Irony wept copious tears. If social media is to be the BCCI's new tool for performance evaluation, not a single Board official from its president on down could survive the purge.

And judging by the outpouring of support for Harsha on Twitter, social media would likely elect him BCCI president.

Elsewhere, there is the story of Harsha's tiff with an official of the Vidharbha Cricket Association. "I had to run down three flights and then up three flights each time, to get from the English commentary box to the Hindi box, so I asked him to leave a door open," Harsha said. "I didn't hear anything after that -- if it was a problem, the official could have called me later to discuss it, no?"

That's the thing about Harsha, by the way. Much as I admire his extempore eloquence and his encyclopaedic knowledge of the game, he is naive to an almost improbable degree -- as witness his expectation that a Board official of even mid-level standing will actually deign to 'discuss' a problem with a mere commentator. 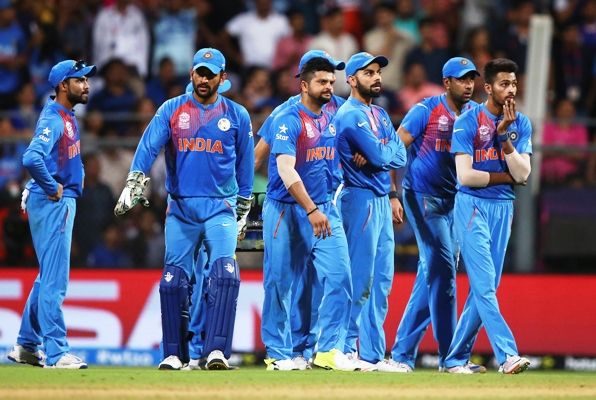 IMAGE: The dejected Indian players after the World Twenty20 semi-final against the West Indies at the Wankhede Stadium, March 31, 2016. Photograph: Ryan Pierse/Getty Images

To return to the swirl of rumours, there is a third one doing the rounds which, if true, is the most disturbing: That players had complained to the Board about commentators who criticised them.

Firstly, it is ironic to think that any player, however thin-skinned, could take exception at Harsha's 'criticism'. His trademark, as I constantly crib, is circumlocution.

When he criticises, which is rarely, he camouflages it with so many caveats and presents it in such roundabout fashion that you are never sure whether he just critiqued a player or proposed marriage to him.

But the worrying aspect of this last, persistent, rumour is what it indicates about the new breed of player. The previous generation -- Sourav Ganguly, Rahul Dravid, Sachin Tendulkar, Anil Kumble, Javagal Srinath and others -- were apt to be touchy at times.

There were times when they disagreed vehemently with what you wrote or said about their play. But equally, by their behaviour they put the 'gentleman' in the sport of gentlemen. When they disagreed, they reached out to you privately; they argued their point of view and contested yours.

They could, and often did, emphatically suggest you were ill-informed, but they always conceded to you the right to call it as you saw it.

If it is true their successors are a bunch of whiny schoolboys complaining to mom about how their teacher gave them bad marks (the unnamed BCCI official cited earlier also says the Board took inputs from the players), it says something about the new generation that is to its lasting discredit. 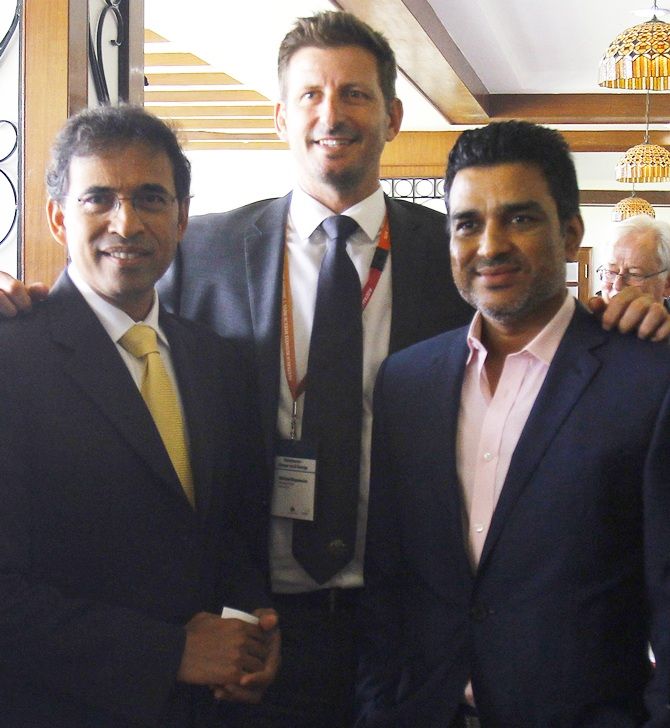 Then again, it is not entirely the fault of the contemporary cricketer as much as it is a logical outcome of the ecosystem that nurtures them. The BCCI is -- and always has been, across successive dispensations -- allergic to criticism.

It has used the 'control' it enshrines in its name to destroy anyone who has dared to point fingers at its functioning -- as a stellar line-up of former greats headlined by Kapil Dev and Mohinder Amarnath will tell you.

And the Board makes no bones about it. It pays the piper, and prescribes the tune. In a recent interview, peripatetic Board secretary Anurag Thakur even said so, in as many words:

At the end of the day they are your employees.

Thakur: But on the cricket field and in the commentary box your job is to speak about cricket and the game but not about BCCI and 10 things around that.

But once in a while you need to take a stand.

Thakur: But not from the commentary box I believe.

That is the thought process of the de facto head of Indian cricket.

That is the stand endorsed by arguably the most recognisable face in Indian entertainment.

What surprise, then, that players reared in this system feel the same way -- that the commentator's job is to applaud their good play and to gloss over their mistakes?

In passing, what surprise that fans, routinely force fed the eulogistic BS that passes these days for commentary, have become incapable of appreciating excellence in others? Rohit Brijnath makes the point with characteristic brilliance in a recent article:

'Today, impending defeat is often met -- in many lands, in many sports -- with the silence we heard from Mumbai when India played the West Indies in the World Twenty20. A stadium wrapped in a shroud. A person who stood among the silent that day called it 'eerie.' It was compelling yet disheartening.'

IMAGE: 'The BCCI is not so much an institution as it is a hall of mirrors. What it shows us is not its arrogant, intolerant, authoritarian face, but our own -- a face distorted by our jingoism, our hatred of the 'other', our intolerance of contrary viewpoints, our thin-skinned inability to take the merest hint of criticism.'
Above: BCCI Chairman Shashank Manohar and secretary Anurag Thakur.

Cricket in any event is merely a reflection of our society, so why limit this to just cricket?

We live in a world where any criticism of anyone in public life, no matter how thoughtful and deserved, is instantly attributed to the 'presstitute.' Simultaneously -- and this is where the irony meter breaks down -- our systems whether societal, governmental or sporting, are geared to reduce the informed commentator to precisely that: A 'presstitute' who will take his money and mouth the lines that have been scripted for him.

The BCCI is not so much an institution as it is a hall of mirrors. What it shows us is not its arrogant, intolerant, authoritarian face but our own -- a face distorted by our jingoism, our hatred of the 'other', our intolerance of contrary viewpoints, our thin-skinned inability to take the merest hint of criticism.

Perhaps that is why we hate the BCCI -- because it is too uncomfortably like us.

And if, along the way, an honest, hard-working, good-natured professional becomes road kill, well, what of that? It's our world -- 15 minutes of fame, five minutes of outrage. Suck it up. 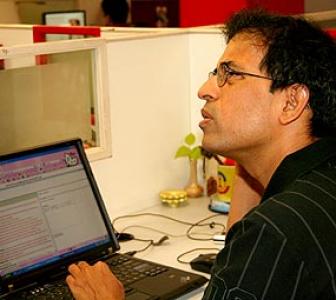 Harsha Bhogle: 'Virat would be my first choice for No. 6 slot'
Azhar is a good team man now'
Harsha's columns for Rediff.com 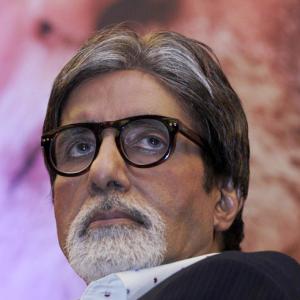 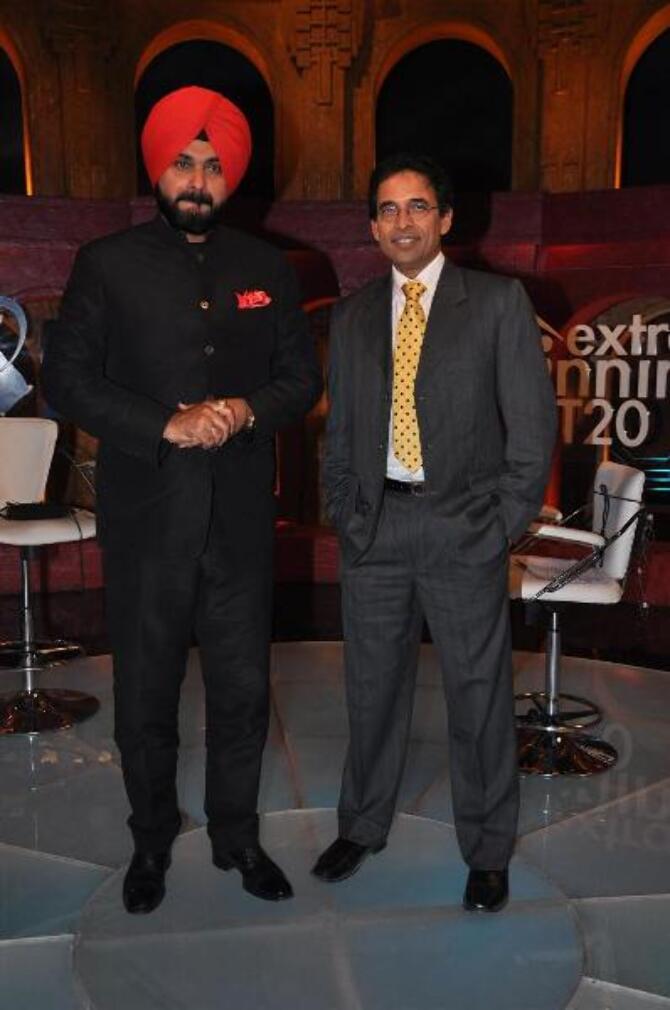