‘We had a heated exchange on the field some years ago and it made headlines all over the world. While I have moved on in life as I feel these things are part and parcel of the game, Gautam for some reason can't get over it’ 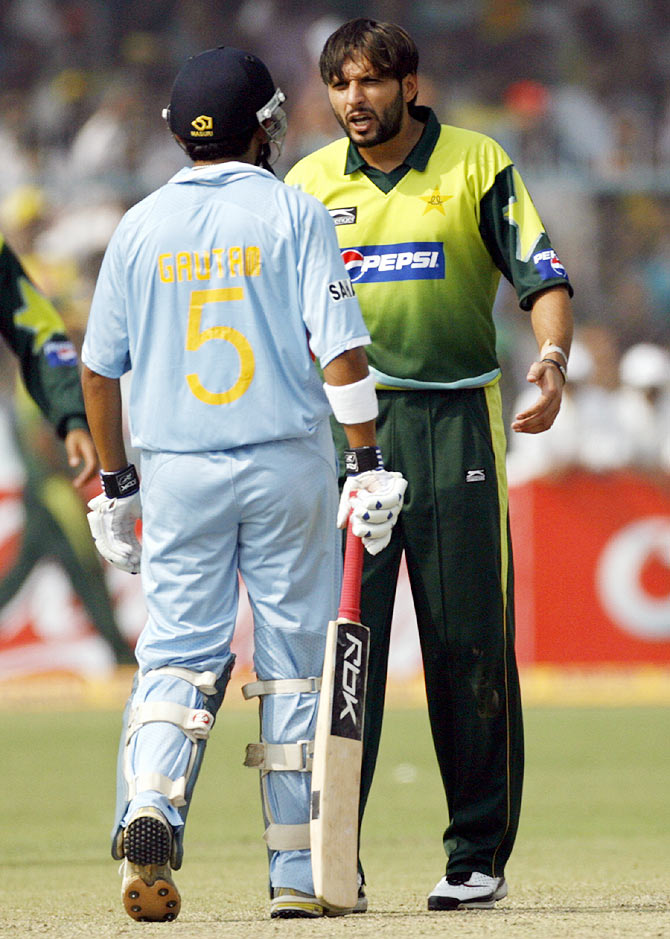 He shares a good rapport with most of the Indian cricketers but Shahid Afridi admits that veteran opener Gautam Gambhir is not someone with whom he would be found in a ‘coffee shop’.

Afridi was recently presented an autographed jersey of the Indian team with a hand-written note from skipper Virat Kohli.

The flamboyant all-rounder recently retired from international cricket while Gambhir is not a regular in the Indian team, having last played a limited overs game more than four years ago.

In an ICC column in the lead up to the marquee clash between India and Pakistan in the Champions Trophy on June 4, Afridi fondly recalled his experiences of playing against the arch-rivals.

"Contrary to popular belief, India and Pakistan players get along very well. Of course, there are exceptions like Gautam Gambhir, who dare I say isn't the friendliest," said Afridi.

"We are unlikely to be found together at a coffee shop anytime soon. We had a heated exchange on the field some years ago and it made headlines all over the world. While I have moved on in life as I feel these things are part and parcel of the game, Gautam for some reason can't get over it. Good luck to him!"

Talking about his friends in the Indian team, Afridi said he cherishes the time he spent with the likes of Harbhajan Singh, Yuvraj Singh and Zaheer Khan.

“The three are my good mates and we have some wonderful memories together from the times when both the sides used to play and tour each other on a regular basis.

"In the early days of our careers, we used to hang out together quite a lot and also spend time at each other's homes. Now, all of us are married and, as such, responsibilities and the priority lists have changed.

"But whenever we catch-up, we meet with warmth and love, and remember our good times together," Afridi recollected.

Amongst the current crop of Indian cricketers, Afridi is is a big fan of captain Virat Kohli.

"Another player I admire and respect from the present lot is Virat Kohli. He has a fantastic cricket bat in hand and an even a better heart in his supremely fit body.

"I will always remember him for the gesture he showed when he gave me an India cricket team's signed shirt following our match in Kolkata in the World T20.

"This shirt sits prominently in my collection and will always remind me of not only my matches and visits to India, but my excellent relationships with most, if not all India cricketers," he said.

Afridi is sad about the two teams not playing each other often anymore. Their last bilateral Test series took place way back in 2007.

It was a lot of fun while they were touring each other's country, said Afridi, who recalled an incident during one of India's tour to Pakistan.

"I recall during one of India’s tours to Pakistan, I invited the entire India team to my Karachi house. We prepared special Pathan style rich food, full of lamb and mutton dishes.

"When the food was served, there was a complete silence in the room and my Indian friends were looking at each other. At that point, I realised that my honourable and respectable guests don't eat that type of food.

“Quite a few of them were vegetarians, and so, we had to urgently replace the food with Daal (lentils) and vegetables dishes. It was quite embarrassing for me to not know about the dietary requirements of the guests since our similarity of culture made me take many things for granted. That was a funny memory of my 'hospitality' for the Indian team.

"Unfortunately, we don't meet each other that often now due to the prevailing relations between the two countries. But I miss the good times with my Indian cricket friends and I am sure they feel likewise.

Hopefully, the situation will improve soon so that the old friends can reunite to relive old memories."