'England got sucked into thinking they were playing a pink ball Test in Adelaide not Ahmedabad.' 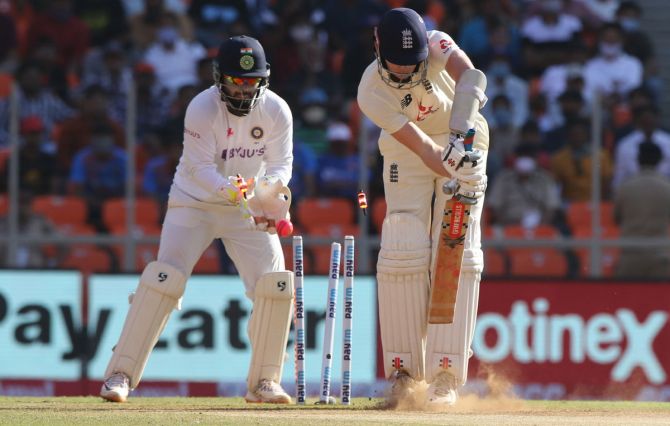 IMAGE: England opener Zak Crawley is bowled by Axar Patel during Day 2 of the third Test in Ahmedabad on Thursday. Photograph: BCCI

While debate continues over the state of the Ahmedabad pitch and whether it is suitable for Test cricket, England shot themselves in the foot before a ball was bowled by opting for a pace-heavy attack on a spinners' paradise in the third match against India.

The hosts wrapped up an extraordinary 10-wicket victory inside two days in the day-night contest at the Narendra Modi Stadium. Spinners claimed 28 of the 30 wickets that fell in five sessions in the shortest completed test match since 1935.

Joe Root's decision to welcome back a fit-again Jofra Archer and a rested James Anderson in a four-pronged pace attack, while retaining Jack Leach as their only specialist spinner, backfired spectacularly.

Prior to the match, all-rounder Ben Stokes said England's seamers were "licking their lips" at the prospect of getting the pink ball to swing significantly.

But they were in for a shock as spin trumped swing, with even Root claiming his maiden five-wicket haul with his part-time offspin.

"I would also like to know who had the bright idea of playing three fast bowlers on a turning pitch. They should be embarrassed," he wrote in the Daily Telegraph.

"England got sucked into thinking they were playing a pink ball Test in Adelaide not Ahmedabad."

So dominant were India's spinners that they did not turn to their seamers in England's second innings, while third spinner Washington Sundar sent down only four deliveries for a wicket.

"We thought the wicket would hold together better than it did – throughout all the practice days it seamed around, it swung and the seamers looked a threatening option," Root said.

"It's easy in hindsight to select a different team."

England's policy of resting multi-format players also meant they were unable to field their strongest XI. Moeen Ali, who has been rested ahead of the white-ball leg of the tour, would have been an asset with his off-spin and free-scoring ability.

Ahmedabad also hosts the fourth and final Test from March 4.

© Copyright 2021 Reuters Limited. All rights reserved. Republication or redistribution of Reuters content, including by framing or similar means, is expressly prohibited without the prior written consent of Reuters. Reuters shall not be liable for any errors or delays in the content, or for any actions taken in reliance thereon.
Related News: Ahmedabad, England, Joe Root, Axar Patel, India
SHARE THIS STORYCOMMENT
Print this article 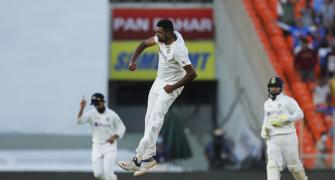