News
Business
Movies
Sports
Cricket
Get Ahead
Money Tips
Shopping
Sign in  |  Create a Rediffmail account
Rediff.com  » Cricket » What a cricketing comeback should be! 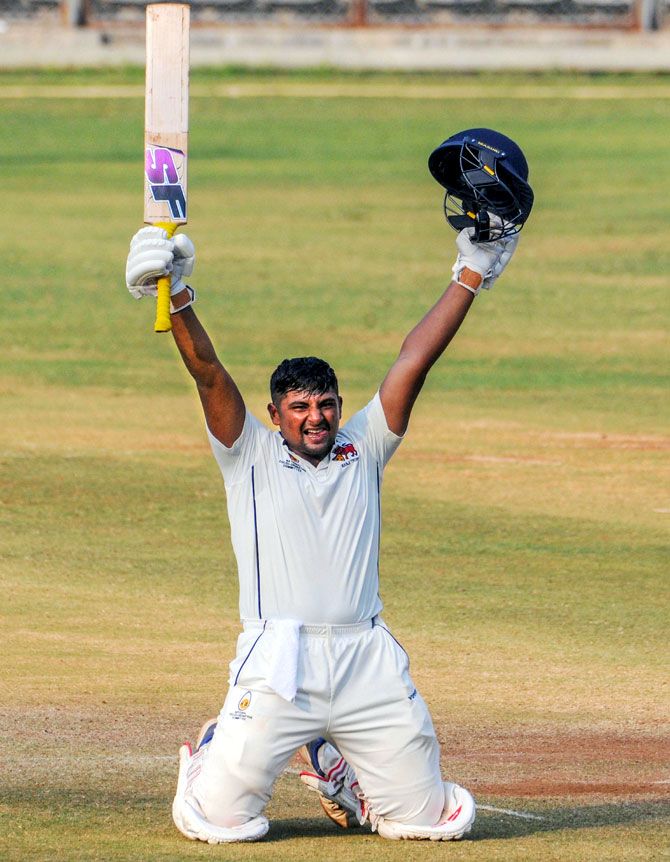 It is turning out to be a grand comeback for Sarfaraz Khan to first class cricket.

A few years ago, Sarfaraz quit Mumbai to join Uttar Pradesh ahead of the 2015-2016 season, but the youngster knew his heart was still with his old team.

And it was not surprising when Sarfaraz quit UP, served a one-year cooling-off period after which he rejoined Mumbai this season.

It seems Sarfaraz is keen to make up for all those lost years with a mountain of runs in the ongoing Ranji Trophy. He started off with 71 not out against Karnataka, then slammed a career-best 301 not out against his former team UP before hitting 226 not out on a difficult in Dharamsala against Himachal Pradesh.

A good innings of 78 followed against Saurashtra before he played another cracking knock of 177 against Madhya Pradesh in what will be Mumbai's final Ranji game of the season after they failed to advance to the knockouts.

41-times Ranji Trophy champion Mumbai might have not progressed beyond the group stages, but Sarfaraz surely left an impression with 928 runs in 6 games at an average of 154, with three centuries (including a triple century and a double) and two fifties.

No wonder Sarfaraz is the talk of the town following his smashing comeback.

"I worked on my shot selection, how to play to the merit of the ball, taking it one ball at a time... the small, small, things that ultimately make a big difference at the end," the 22 year old tells Rediff.com's Harish Kotian.

You made a smashing comeback in domestic cricket? What made it possible?

It was all hard work put in by me and my father. I also had belief in myself which I believe made it possible.

I had a one-year cooling off period during which I tried to know myself better and work harder to improve my game.

What does it mean for you playing for Mumbai?

Obviously, playing for Mumbai and scoring runs for Mumbai means a lot to me. I consider myself lucky that I am getting to play for a team like Mumbai and playing big knocks for the team's cause.

I hope to continue scoring runs consistently and win more matches for Mumbai. 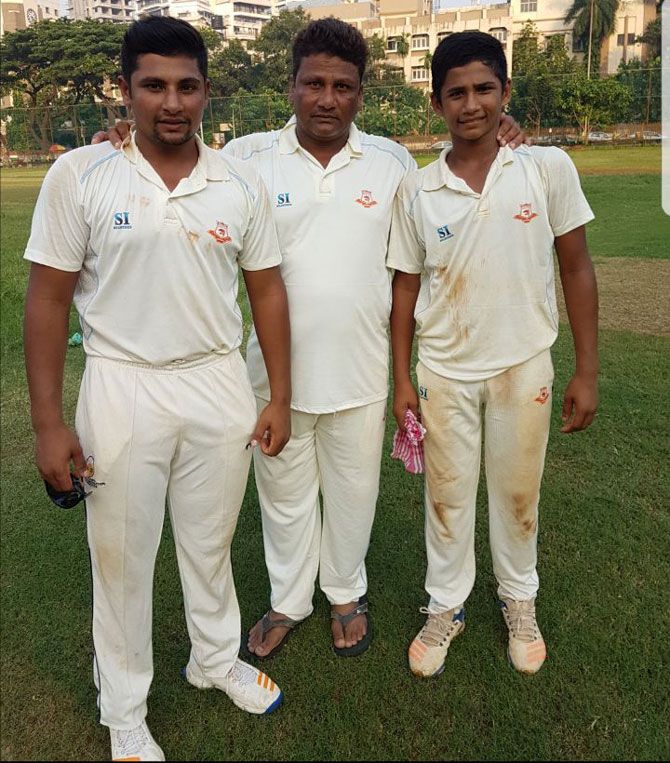 How much did you miss playing for Mumbai?

I was very emotional when I returned to play my first match for Mumbai because I had played the Under-14, Under-16 and all the other levels (for Mumbai) till the Ranji Trophy.

The only thing on my mind was that I wanted to play for Mumbai and win matches for Mumbai.

I was feeling happy inside because playing for a big team like Mumbai is a big thing for any cricketer.

Tell us about your triple century against UP. What was going in your mind during that innings, playing against your former team?

It was all about proving to UP that I am a very good player. I also had to make most of my chances and seal a permanent berth in the Mumbai team.

I had the belief that I could do well for Mumbai and I knew I had to do it.

I just focussed on the process. My main aim was to win matches for Mumbai, so I was only thinking of it.

You followed it up with a double century against Himachal Pradesh which came on a tough wicket, 71 against a good Karnataka bowling attack and then 78 in Saurashtra. How did you find the consistency which was missing earlier in your career?

If you score runs consistently for your team, then you feel proud. I will try to carry on my good form in red ball cricket and keep scoring runs for Mumbai.

It is just that I am looking after myself. I have got back my focus and I am working harder than ever before.

I practice my batting a lot nowadays, in the morning as well in the evening. I have improved my fitness a lot too.

I am following my dad's instructions to the hilt. Whatever he says I am doing it.

He is my guru and if you listen to your guru then you will move ahead and do well in whatever you do in your life.

For me, my dad is everything and this is all possible because of him. 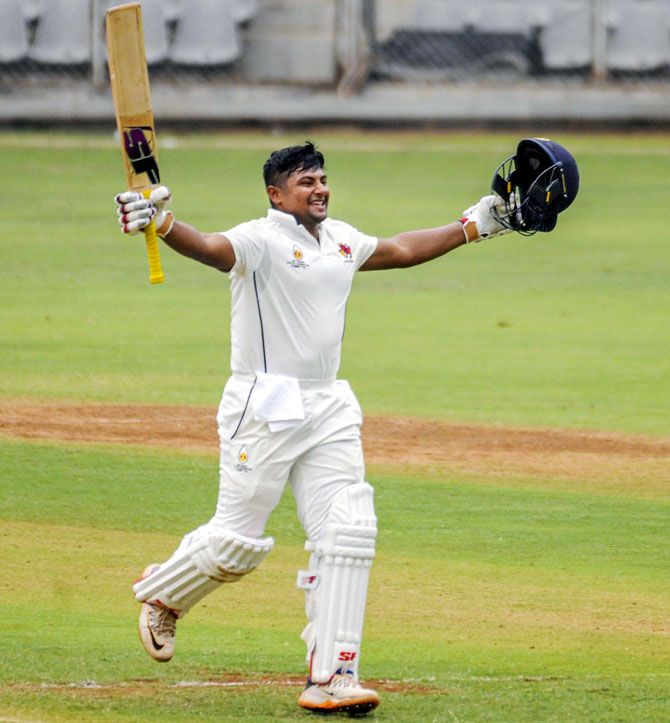 You had to take a year off due to the cooling-off rule after you quit UP to join Mumbai. What did the tough times teach you?

As a person, I have changed a lot. I have become more calmer now.

In the cricketing sense, during the one-year cooling period, I got to understand myself better as a person.

I also gave a lot of thought to my game as to what I need to improve as a cricketer -- like working on my fitness and how to take my batting to the next level.

I was only focussing on the positives and working on those things which could make me a better person and a better cricketer.

Did you change anything in your game during the cooling off period?

I worked on my shot selection, how to play to the merit of the ball, taking it one ball at a time... the small, small, things that ultimately make a big difference at the end.

I have improved my fitness a lot and it is showing results already. I will continue to practice and work hard, very hard, and spend a lot of time on the ground which will eventually go into me improving as a cricketer. 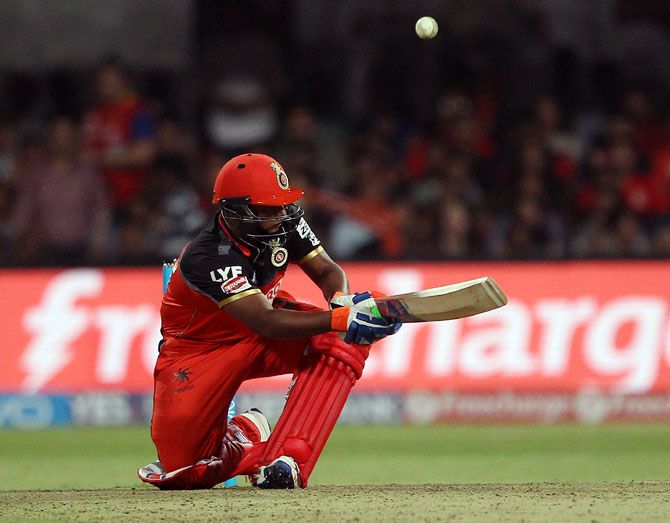 IMAGE: Sarfaraz in action for RCB during the IPL in 2016. Photograph: PTI

How crucial will this year's IPL be for you after your good showing in the Ranji Trophy?

The amount of hard work you do over four days in a Ranji Trophy game, the same you put in just one match of T20 cricket. You have to think on your feet in T20 cricket because things happen so fast.

Are you looking forward to playing under the legendary Anil Kumble who has taken over as coach at Kings XI Punjab, and a new captain in K L Rahul?

Anil Sir knows me for a long time now. Hopefully, he will back me and Kings XI Punjab will back me.

I have played for a long time with Rahulbhai, at RCB and then at Kings XI Punjab. He is a very good player and he has been in great form recently, scoring runs everywhere.

We know each other well and I hope things will work out well. 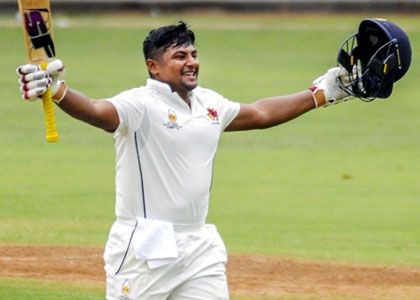 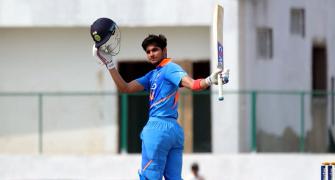 SEE: Dhoni on the 2 BIG moments of his career