Rohit Sharma scored a fantastic unbeaten 86 under pressure as India beat West Indies by three wickets to take an unassailable 3-0 lead in the five-match ODI series in Antigua on Saturday.

Chasing a target of 226, the visitors were reeling at 92 for six but Rohit (86 not out) along with senior-pro Harbhajan Singh (41) added 88-runs as India finally got home rather comfortably with 22 balls to spare.

The last two matches of the series will thus be rendered inconsequential as Rohit kept his composure when the team was in dire straits. He got an able ally in Harbhajan as the two batted with utmost responsbility. They never did anything flashy during their seventh wicket stand that lasted 18.4 overs.

Save Parthiv Patel (46), none of the top-order batsmen showed intent although Virat Kohli got a poor leg-before decision when the ball seemed to be traveling down leg-side.

Shikhar Dhawan (4) struggled, Subramanium Badrinath (11) went for a non-existent single, Suresh Raina was out to a ugly heave. When Yusuf Pathan was brilliantly caught by Lendl Simmons to reduce India to 92 for six, it looked like all but over for the Men In Blue.

But Rohit had other ideas. Along with Harbhajan, he ran the singles well but didn't forget to punish the loose deliveries in the process. Praveen Kumar (25 not out) provided final flourish after Harbhajan was dismissed.

It was a tale of batting collapses and late recoveries with for both teams. When West Indies batted, they were tottering at 96 for 7 in the 30th over before recovering to reach 225 for 8 in their 50 overs, thanks Andre Russell's magnificent 64 -ball unbeaten 92. 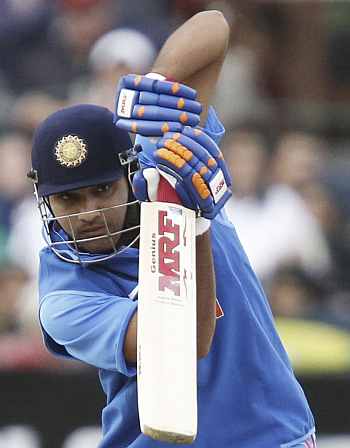 West Indies lost six wickets at one stage for 31 runs while India also lost four wickets for 32 runs in the middle overs before making a good comeback.

Interestingly, a run-out at critical junctures in both innings had a huge role in the context of the batting collapse for the teams.

Badrinath drove to mid-off rather firmly and set off for a single and realized late that his partner Parthiv had not responded. He tried to trace back his steps but it was too lateeven a despairing dive wasn't of any use.

It affected the concentration of Parthiv (46) who  cut at a widish delivery from Devendra Bishoo straight into the hands of Russell stationed at gully.

During India's bowling, leg-spinner Amit Mishra (3-28) had once again befuddled the hosts but the bowlers couldn't polish off the tail as it resulted in West Indies crossing 200 from being down in the dumps at 96 for seven.

Largely it was on account of an unexpected hurricane from fast bowler Andre Russell who clobbered the bowlers with utter disdain.

Russell shared two important stands of 78 and an unbeaten 47 runs for eighth and ninth wicket with wicketkeeper Carlton Baugh (36) and Kemar Roach (7 not out) to lead the recovery as 47 runs came off the final three overs.

Russell was helped by India's late introduction of their fifth bowler. The part-timers Yusuf Pathan, Suresh Raina and Virat Kohli gave away as many 65 runs from their quota of 10 overs.

Russell plundered 42 runs from the final 14 deliveries he faced and smashed 22 and 15 runs off the final two overs bowled by Suresh Raina and Praveen Kumar respectively.

He put a lid on the home innings in style by smashing Praveen for a six and a four off the final two deliveries of the innings.

Earlier, it was Sarwan's dismissal shell-shocked the hosts and galvanized the tourists to the extent that the entire innings came off the wheels in the next few overs.

Mishra built on this breakthrough with three wickets off successive overs.

He first had Marlon Samuels (1) feel for a delivery outside his off stump to be out stumped and then sent down a googly which Danza Hyatt (1) mistook for a leg-break and was bowled off an inside edge.

Simmons (45) then went forward in defence, only to find the big-turning leg break take the edge to first slip.

It brought Kieron Pollard to the crease in the 25th over and demanded some responsible batting. Pollard scratched around for 16 deliveries to score 6 runs before he was caught behind off Harbhajan Singh's bowling.

He gave full vent to his displeasure at the decision and took ages to get off the ground.

Munaf Patel came back for his second spell with the wicket of skipper Sammy in the 30th over as he made him edge one behind the stumps. West Indies were certainly down and out at 96 for 7.

However Baugh and Russell made a meal out of India's fifth bowler Yusuf Pathan who was hit for two successive sixes in the 40th over by the latter over midwicket.

Munaf finally broke the stand in the 46th over when Baugh lifted one into the covers for Shikhar Dhawan to take a simple catch.

Russell went on to complete his half century in the 47th over with a single off Raina.