India wriggled out of a precarious position to clinch a nail-biting one-wicket victory over the West Indies in a low-scoring first One-Day International in Cuttack on Tuesday.

After restricting the visitors to 211 for 9, India were tottering at 59 for 5 before Rohit Sharma's 99-ball 72 helped them scrape past the target with seven balls to spare and take a 1-0 lead in the five-match series.

Rohit took India close to the target but was out with 11 runs to get, leaving it to the last pair of Varun Aaron and Umesh Yadav to see India through.

The Mumbai batsman's knock was laced with three boundaries and a six. He and Ravindra Jadeja (38) put on 83 runs for the sixth wicket to set up victory.

But there was excitement galore as fortunes ebbed and flowed till the very end.

After two wicket-maiden overs following Rohit's dismissal, the visitors had a real chance to wrap it up, with the last two Indian batsmen requiring 11 to finish the task. 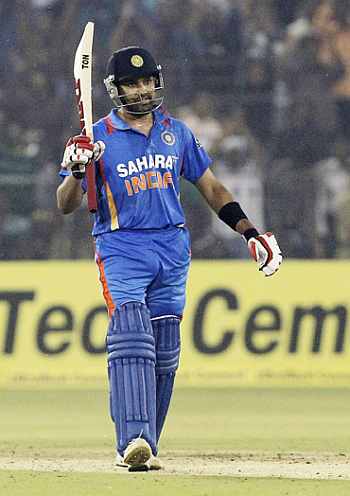 There was a lot of drama and confusion between the two batsmen, but the West Indies could not dislodge them and India registered their 10th win on the trot at home, beginning with their World Cup success.

Aaron slammed Darren Sammy for a four before Yadav hit the winning boundary in the same over.

Yadav (2-33) was the pick of the three-pronged Indian ace attack, which ensured that the team did not miss Praveen Kumar, who was ruled out of the series due to a fractured rib.

Darren Bravo was the top-scorer for the West Windies with 60 (74b, 6x4), but the stylish left-hander could not convert his knock into a big one.

He was involved in a 75-run fourth-wicket partnership with Danza Hyatt (31 from 54 balls; 2x4, 1x6) as the duo somewhat repaired the damage done by the Indian pacemen early on but could not consolidate.

It was a flop show by the much-fancied Kieron Pollard, who took 33 balls for his 13 runs, leaving the visitors to bank on a 22-run cameo by Andre Russell to get past the 200-mark.

In reply, the strong Indian batting line-up left the packed crowd stunned with a reckless display, before Rohit steadied the innings.

It was not an ideal time for Rohit to come into the middle with India reeling on 47 for three.

Immediately after he joined Sehwag, some frustrated fans in the packed crowd hurled missiles at Pollard, forcing the match to be stopped for about five minutes.

Rohit, however, remained unfazed, and focussed on the task ahead.

In his comeback match, the task only got tougher as two quick wickets followed in the form of Sehwag and Raina.

India's top five were back in the dressing room with just 59 on the board in 11.2 overs, when Jadeja joined Rohit.

Fresh from his match-winning 175 against Railways and 100 vs Rajasthan in the Ranji Trophy, Rohit was not short on confidence and found an ally in Jadeja.

The Saurashtra left-hander, incidentally, had a triple hundred in a domestic match at the same ground.

The duo batted intelligently to take India closer by 70 runs before Jadeja got out.

India suffered another blow when Ashwin ran himself out in a fashion strikingly similar to the one in the dramatic drawn third Test in Mumbai.

After a breezy start by India with 15 runs coming from Kemar Roach's error-prone first over, India soon found themselves on the backfoot.

Opener Parthiv Patel (12) once again failed to cash in on the opportunity, getting out to a wide delivery, and so was the case with Gautam Gambhir.

Having opened his account with a boundary, an over-ambitious Gambhir was dismissed by Roach.

The Windies pacer was on a roll, picking his third victim in Virat Kohli.

It was around the same time that play was stopped, and the situation only got worse for India after resumption as they lost Sehwag (20) and Raina (5).

But just like in the Test series, Sammy's men once again failed to capitalise, letting Sharma and Jadeja off the hook.

Earlier, the trio of Yadav, Aaron and Vinay picked one apiece initially, with the top three of the Windies batting -- Lendl Samuels (19), Adrian Barath (17) and Marlon Samuels (10) -- making their way back to the dressing room with the scoreboard reading 52.

The Windies top-order looked reckless as Vinay provided the first breakthrough, dismissing Barath, who looked in elegant touch before edging one behind.

Aaron began his spell with a bang as he castled a dangerous-looking Samuels, who was beaten by a fast, incoming delivery.

Yadav, the most impressive of the three, generated good pace and got his reward when he went through Simmons's defence with a 144kph trailblazer. He had an impressive first spell that read 5-1-22-1.

Bravo looked to rebuild the Windies innings with Hyatt but lack of sensible approach hurt the Windies' cause as they kept losing wickets at regular intervals.

Poor coordination between the duo resulted in Hyatt's run out while Bravo, dropped twice -- on 27 and 59 -- eventually departed for 60 after being foxed by  part-time off-spinner Raina.

Big-hitter Pollard too did not last long, exposing the tail in what was another meek display by the Windies line-up. 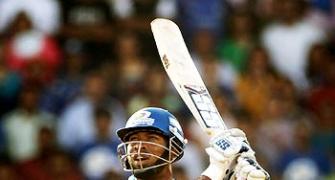 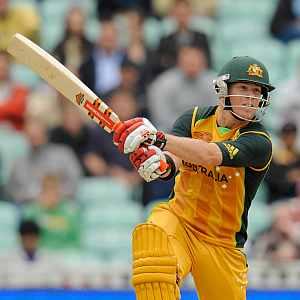 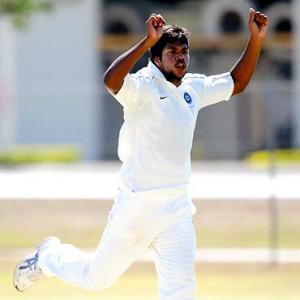 No pressure when I am told I'm the fastest in the country: Aaron