Kane Williamson inched towards his ninth Test century as he and BJ Watling staved off Sri Lanka's push for victory at the close of play on the third day of the second Test at the Basin Reserve on Monday. Williamson was 80 not out, his 16th Test half century, as he combined in an unbroken 94-run partnership with Watling (48 not out) to take New Zealand to 253 for five at the close, a lead of 118 runs with two days left to play.

The visitors, however, must be ruing two missed opportunities to sew up the game within three days after they dropped Williamson twice.

The 24-year-old was put down on 29 by Rangana Herath in an orthodox caught and bowled opportunity with the score 132 for four and then dropped in the final session by Nuwan Pradeep at deep backward square leg on 60, just three overs before the second new ball was due.

Sri Lanka had put the hosts on the back foot with three wickets before lunch and then seized control when they reduced them to 159 for five after it, with the home side holding a 24-run lead and their last recognised pair at the crease.

Hamish Rutherford (40) and Tom Latham (35) had given New Zealand a solid start on Monday, driving their side to 75 without loss in the first hour before Pradeep dismissed both.

Ross Taylor was then deceived by Herath's guile before lunch to leave the hosts floundering.

They slumped even further after lunch when Brendon McCullum (22) was trapped lbw by Dhammika Prasad while Jimmy Neesham was also leg before to Pradeep for 19 before Williamson and Watling took them to the break.

Kumar Sangakkara had put his side into a strong position on the second day by stroking a masterful double century, while he also held together four vital partnerships that gave them a first-innings lead.

Sri Lanka need to win the Test to level the two-match series after New Zealand won the first game in Christchurch by eight wickets.

Image: Kane Williamson and BJ Watling of New Zealand leave the field at the end of play during day three of the Second Test match against Sri Lanka at Basin Reserve in Wellington.

© Copyright 2022 Reuters Limited. All rights reserved. Republication or redistribution of Reuters content, including by framing or similar means, is expressly prohibited without the prior written consent of Reuters. Reuters shall not be liable for any errors or delays in the content, or for any actions taken in reliance thereon.
Related News: BJ Watling of New Zealand, Kane Williamson, Sri Lanka, Rangana Herath, Basin Reserve
COMMENT
Print this article 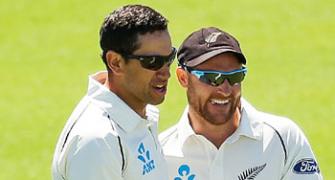 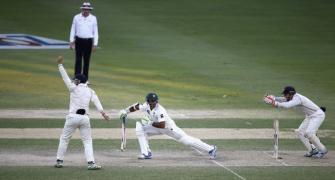 Sangakkara fastest to 12,000 runs but Sri Lanka in trouble 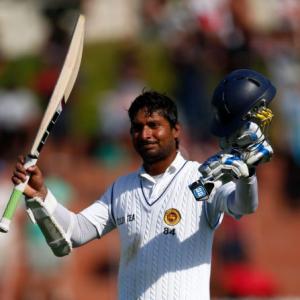