Rohit Rayudu and Tilak Varma slammed impressive centuries to set up Hyderabad's 17-run win over Himachal Pradesh via the VJD method in their Group A match of the Vijay Hazare Trophy one-day tournament in New Delhi on Saturday.

The duo stitched 123 runs for the second wicket to frustrate the pedestrian Himachal bowlers for 32 overs.

Himachal captain Rishi Dhawan must have rued his decision to insert Hyderabad in after winning the toss as his team was given 48 overs for their run chase as two overs got deducted due to bad light.

The revised target was calculated at 353 under the VJD method and Himachal could only score 335 for 9 from 48 overs.

Number three batter Amit Kumar hit 103 off 98 balls (12x4s; 1x6) but that was not enough to overhaul the massive target.

Elligaram Sanketh was the most successful bowler for Hyderabad with figures of 3/54.

Brief Scores for other games in Group A: 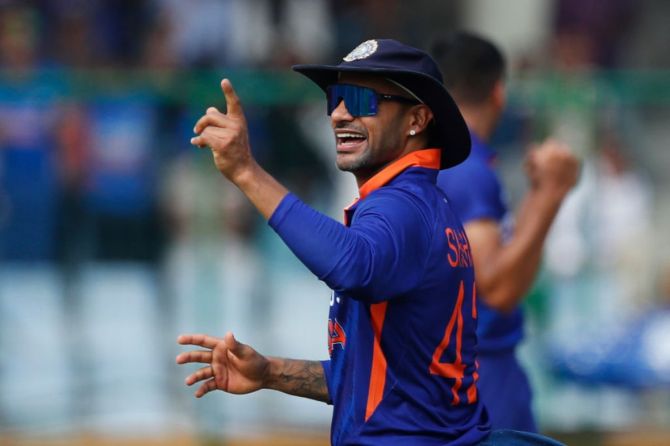 Ishant (3/24) struck thrice as Delhi limited Vidarbha to 207 after opting to field in a Group B game.

Ganesh Satish top-scored for Vidarbha with 45 off 74 balls.

Delhi chased down the target in 44.5 overs with Dhawan making 47 off 64 balls. Lalit Yadav stayed unbeaten till the end, with 56 off 73 balls.

Dhawan, who plays only in ODIs for India, will captain the national team for the three games in New Zealand, later this month.

Brief Scores of other games in Group B:

Bengaluru: Rain played havoc with the proceedings on the opening day of Group C matches in the Vijay Hazare Trophy one-day tournament in Bengaluru on Saturday with all four games being washed out.

Tamil Nadu, the previous season's runner-up, was 101 for 2 in 17.1 overs against Bihar before rain halted play and the match was subsequently called off.

Sent in to bat after Bihar captain Ashutosh Aman won the toss, Tamil Nadu lost opener N Jagadeesan (5) in the second over when he fell to HV Singh. B Sai Sudharsan, the other opener, was in an aggressive mood and smacked eight boundaries in his 38-ball 49 before falling LBW to Pratap Singh.

Captain Baba Indrajith and his twin brother Aparajith (35, 44 balls, 5 fours) took the score to 106 before showers halted proceedings. With the rains not relenting, the match was subsequently called off. The teams got two points each.

The Chhattisgarh-Arunachal Pradesh game saw the latter make 137 in 21 overs with A Herwadkar hammering a 54-ball 71, inclusive of five sixes. Arunachal were set a revised target of 178 in 21 overs. They were on 35 for 2 in the ninth over when rain intervened and ended the match.

Brief Scores for other games in Group C:

Mumbai:  Jammu and Kashmir secured one of the most memorable wins in their history when they shocked reigning Ranji champions Madhya Pradesh by two wickets in a high-scoring Vijay Hazare Trophy Group D match at the DY Patil Stadium here on Saturday.

Opener Yash Dubey slammed a run-a-ball 121 (13x4s), while his opening partner Abhishek Bhandari made 74 (81b; 9x4s, 2x6s) as Madhya Pradesh posted a mammoth 342 for 9 after being asked to bat. But Jammu and Kashmir pulled off a heist as half-centuries from opener Vivrant Sharma (69), Henan Nazir (68) and Abdul Samad (66) laid the foundation before Abid Mushtaq played a terrific counter-attacking knock of 42 from 19 balls to set up the victory. Mushtaq smashed three sixes and as many boundaries, taking on the likes of Avesh Khan and Kuldeep Sen. But there was drama in store when Avesh (3/86) dismissed him in the 47th with Jammu and Kashmir still needing 31 off 21 balls.

Sahil Lotra (23 not out from 11b; 4x4s) held his nerves to seal the chase with four balls to spare. Auqib Nabi (11 not out; 9 balls, 1x4) lent him fine support as the duo held on after Mushtaq's dismissal in a match-winning 34-run unbroken partnership for the ninth wicket.

But at the innings break, it looked like an improbable chase for Jammu and Kashmir batters who started on a watchful note.

Opener Sharma and Jatin Wadhwan (17) put on 81 runs from as many balls but off-spinner Saransh Jain dismissed both batters with the addition of just 19 runs to derail their chase.

They were staring down the barrel after skipper Shubham Pundir (6) got out cheaply as they needed 230 runs from 167 balls. But Samad did the damage control in a 117-run partnership with Nazir. Avesh dismissed both of them with the addition of just 11 runs.

Thereafter, it was Mushtaq who played a perfect counter-attacking knock to keep Jammu and Kashmir in the hunt. In Group D, Baroda climbed to the top of the table, followed by Uttarakhand and Jammu and Kashmir on net-run rate. Brief Scores of other games from Group D: Odisha 178 in 44.2 overs (Subhranshu Senapati 60, Anshy Rath 51; Himanshu Bisht 4/26, Rajan Kumar 3/24) lost to Uttarakhand 179/6; 42 overs (Dikshanshu Negi 80 not out, Swapnil Singh 48; Debabrata Pradhan 2/20, Rajesh Mohanty 2/36) by four wickets. Ranchi:  Tanush Kotian grabbed a career-best 4 for 31 with his off-spin as Mumbai bowlers blew away the Bengal batting line-up before cantering to an eight-wicket win in a Group E match of the Vijay Hazare Trophy one-day tournament here, on Saturday.

Fresh from his exploits in Mumbai's maiden Syed Mushtaq Ali T20 triumph, Kotian got down to business after his pace colleagues Tushar Desphande (2/23) and Mohit Avasthi (1/29) handed Bengal early blows.

The 24-year-old Kotian and his spin partner Shams Mulani (2/14) bagged six wickets between themselves as Bengal were skittled out for a paltry 121 in 31.3 overs after Mumbai elected to field.

Skipper Anjinkya Rahane anchored the Mumbai chase with an unbeaten 59 from 72 balls (6x4, 2x6) to take the team home in 30.2 overs.

Bengal speedster Mukesh Kumar (2/20) dismissed Mumbai openers Prithvi Shaw (26) and Yashasvi Jaiswal (10) for the addition of just 10 runs, but Rahane held their innings together in a match-winning 75-run unbroken partnership with wicketkeeper-batter Hardik Tamore (18 not out).

Earlier, the Bengal batters showed a complete lack of application and lost half of their side inside 12 overs.

Seasoned opener Writtick Chatterjee (1) continued his horror show with the bat and got out for his seventh successive single-digit score across formats, after being trapped by Deshpande.

Talented India 'A' batter and Bengal skipper Abhimanyu Easwaran (12) got off to a good start but continued his woeful run with the bat, while the experienced Anustup Majumdar also fell for a single-digit score with the Mumbai pace attack ratting the top-three.

Veteran Manoj Tiwary held the fort for Bengal with a resolute 47 from 64 balls (5x4, 1x6) but wickets kept falling around him. He somehow helped the team get past the 100-run mark with some useful contribution from No. 11 Mukesh Kumar (10 not out).

Kotian, who had dished out a fine all-round show and hit the winning runs for Mumbai in their maiden SMAT triumph, dried up the runs in the middle overs en route to his four-wicket haul.

Left-arm spinner Mulani ended the resistance of Tiwary and cleaned up Geet Puri in his next over to terminate Bengal innings.

After the opening day's action, Puducherry, who defeated Mizoram by seven wickets, led Group E on net run rate, while Mumbai and Maharashtra occupy the second and third spots respectively.

Maharashtra defeated Railways by seven wickets with opener Ruturaj Gaikwad slamming a 124 not out. He and Rahul Tripathi (75) put together an opening partnership of 165 runs as Maharashtra chased down the modest target of 219 with 70 balls to spare.

Brief Scores of other games in Group E: 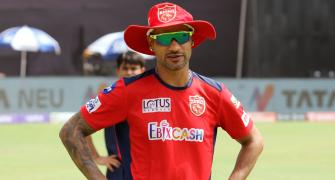 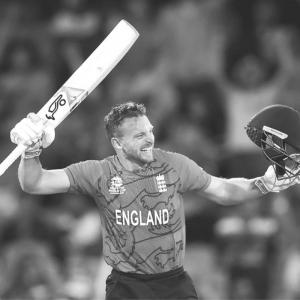