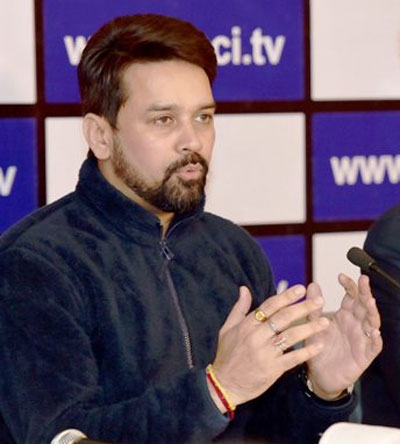 Anurag Thakur is set to be unanimously elected the Board of Control for Cricket in India president in the Board's Special General Meeting (SGM), in Mumbai, on Sunday, replacing Shashank Manohar who stepped down from the position to take up the International Cricket Council chief's job.

Thakur, who is currently serving as the Secretary of the Board, is set to be proposed for the job by East Zone, whose turn it is to project the candidate for the coveted post.

Thakur, also a Bharatiya Janata Party MP in Lok Sabha, has the backing of all the east zone members including Bengal, Assam, Jharkhand, Tripura and the National Cricket Club.

The 41-year-old will be taking over the reins of the embattled Board in rather tough times as the BCCI is facing heat from the Supreme Court to implement the Justice R M Lodha Committee's recommendations for sweeping reforms.

Manohar's exit from the top post barely seven months into his tenure has necessitated the election of the new chief of the world's richest and most powerful cricket body.
He was elected as ICC's first independent chairman on May 12.

Once Thakur is elected unopposed, it would be his prerogative to pick his replacement for the Secretary's position.

According to sources, Maharashtra Cricket Association chief and business magnate Ajay Shirke is the top contender for the post.

Shirke, however, has made it clear that he will not ‘stand in a queue’ to get a post in the Board.

"...I have never put myself in contention for any top job within the BCCI nor do I have any goals of getting any posts. My name may be doing the rounds as you say, and it might look to many that I am myself pushing my name in the media, which I have never done," he had stated.

Source: PTI© Copyright 2020 PTI. All rights reserved. Republication or redistribution of PTI content, including by framing or similar means, is expressly prohibited without the prior written consent.
Related News: Board of Control for Cricket in India, Shashank Manohar, SGM, International Cricket Council, Ajay Shirke
SHARE THIS STORYCOMMENT
Print this article 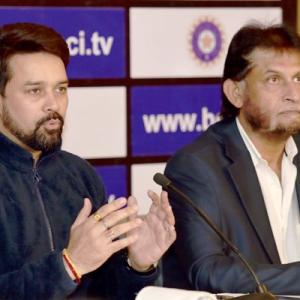