Chris Martin struck back for New Zealand with two quick wickets to leave South Africa on 27 for 2 at the close of play on a rain-hit first day in the second Test in Hamilton on Thursday after the hosts' middle order had collapsed.

Martin had South Africa captain Graeme Smith (13) and night watchman Dale Steyn (4) caught by wicketkeeper Kruger van Wyk after the visitors had taken five wickets for no runs in 20 balls to bowl New Zealand out for 185 at Seddon Park.

Alivro Petersen was not out on eight, while Hashim Amla was on two for the visitors at the close of play. 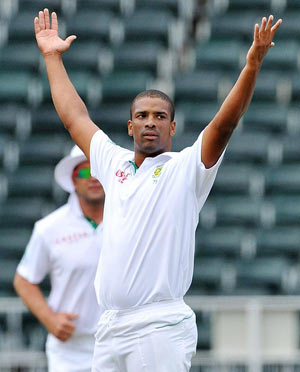 Martin's double strike restored a measure of balance after New Zealand had slumped from 133 for two to 133 for seven in a little over 15 minutes during the final session following some hostile fast bowling from Steyn and Vernon Philander.

Brendon McCullum's reckless hook shot to a Steyn bouncer that was over his head after he had battled for more than two hours sparked the collapse.

McCullum had curbed his natural attacking instincts to grind his way to 61 and share in an 89-run partnership with Ross Taylor (44) as New Zealand looked to be in a strong position after being asked to bat on a green-tinged pitch.

However, just as they had in the drawn first Test in Dunedin, McCullum and Taylor were dismissed in quick succession.

McCullum belted the ball straight to Jacques Rudolph at deep backward square, with the South African's only requirement to take a step back so he could catch the ball at waist height.

Taylor prodded at a straight delivery from Philander and was well caught at first slip by Smith, before Kane Williamson got a Steyn delivery that reared on him off a length and the ball hit the shoulder of the bat and flew to Smith.

Daniel Vettori then played around a Philander delivery that nipped back into the left-hander and was bowled, before Doug Bracewell feathered a catch to wicketkeeper Mark Boucher three balls later.

Pace bowler Mark Gillespie, who is making his return to the Test team for the first time in more than three years, finally ended the run of wickets at 133 when he nicked a ball through the slips to the boundary.

Gillespie (27) and van Wyk (21) combined for a cameo partnership of 43 runs in 40 balls before Imran Tahir trapped Brent Arnel lbw for three to end the innings.

Rain had forced the players off the field for just over two hours that destroyed much of the middle session. 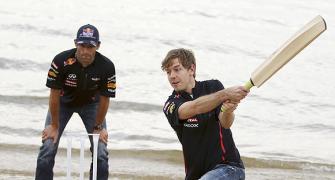 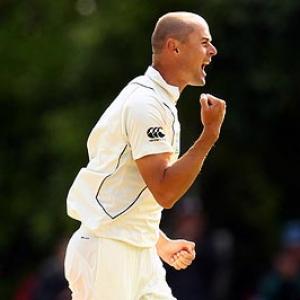