Peter Handscomb and Shaun Marsh helped Australia escape with a remarkable draw against India on the final day of the third Test in Ranchi on Monday. 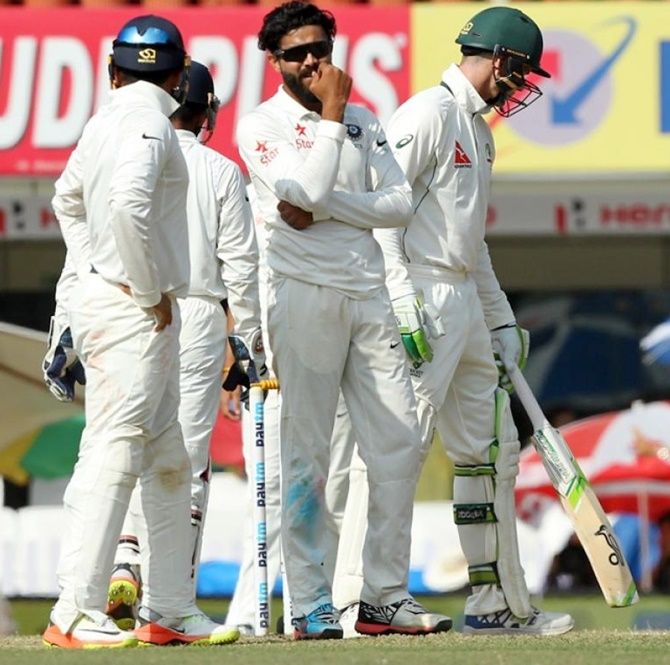 The number of balls consumed by Shaun Marsh – Peter Handscomb in fifth wicket partnership. There has been only one longer partnership from a visiting side in India in their second innings to save a Test. Zimbabwean pair of Andy Flower and Alistair Campbell batted for 394 balls (while adding 209 runs) at Nagpur in 2000 to save their side.

Average runs Ravindra Jadeja conceded for each wicket in Ranchi Test. All other Indians combined conceded 74 runs for every wicket.

Number of Australian players to have appeared in the series. Ravindra Jadeja has dismissed 12 of them at least once. Mitchell Starc- who has flown back home – is the only missing entry.

The number of wickets Ashwin has taken in 2016-17 season. With this he has equalled Dale Steyn’s world record of most wickets in Test matches in a season. Ravindra Jadeja – with 67- wickets is third in this list.

The number of consecutive decisive games on Indian soil after which a Test involving Australia ended in a draw. The last drawn Test between India and Australia in India was at Delhi in November 2008.

The number of times Australia have managed to save a Test in India despite conceding first innings lead of more than 150. The other two occasions came at Delhi in 1979-80 and Wankhede in 1986-87.

The last time a visiting team batted for 100 overs in both innings to earn a draw in India before Ranchi Test. England did so at Nagpur.