New Zealand's victory is only its fifth over South Africa in 45 Tests. 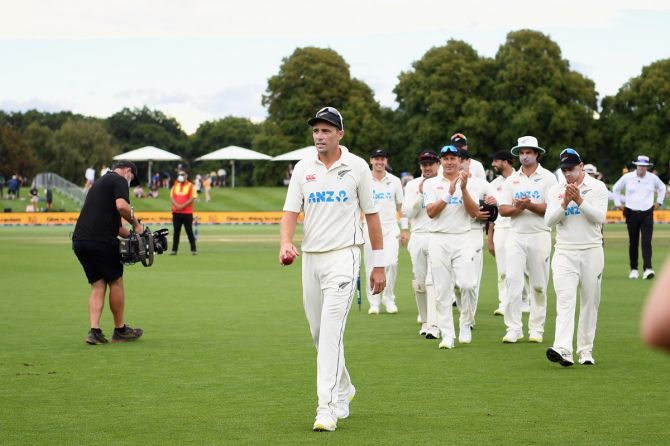 IMAGE: Pacer Tim Southee leads the New Zealand team off the Hagley Oval after an innings and 276-run victory over South Africa in the first Test, in Christchurch on Saturday. Photograph: Kai Schwoerer/Getty Images

New Zealand put themselves in prime position for a first Test series win against South Africa after steamrolling the Proteas in seven sessions to win the opening match by an innings and 276 runs on Saturday.

The hosts claimed the last seven South Africa wickets in an extended morning session on day three, with Tim Southee (5-35) the wrecker-in-chief.

Dean Elgar's side folded for 111, marginally better than the 95 they managed in the first innings at Christchurch's Hagley Oval.

Temba Bavuma's 41 was the top score by a South African batter while Elgar's scores of one and zero best illustrated their batting struggles on a green top.

In contrast, Henry Nicholls smashed 105, Tom Blundell narrowly missed a hundred, and number 11 Matt Henry made 58 not out the only time New Zealand batted.

The last wicket partnership of 94 between Blundell and Henry was only one run fewer than South Africa's first-innings total.

It was a flawless display by a New Zealand side missing regular captain Kane Williamson through injury and the retired Ross Taylor.

Trent Boult was also missing, away on paternity leave, but replacement Henry claimed 7-23 to rout South Africa in the first innings and went on to claim the man-of-the-match award.

This was just New Zealand's fifth victory against South Africa in 46 Tests, breaking a 16-match winless streak against the Proteas.

"Winning the toss was a big part of it, but from there guys put the ball in the right area," captain Tom Latham said of New Zealand's formidable bowling attack.

"To back up the performance with the bat on a wicket that was a little tricky ... it was probably the perfect performance, really."

The win came as a welcome boost after World Test champions New Zealand had split the previous home series with ninth-ranked Bangladesh, which included a defeat at Mount Maunganui.

In contrast, South Africa had looked in great form coming into the match having beaten India 2-1 at home. But their decision to opt for a four-man pace attack without a specialist spinner came back to haunt them as they bled four runs per over.

They were equally jaded as a fielding unit and spilled four catches, including two reprieves to Nicholls, who went on to smash the match's only hundred.

"It is something I am also trying to wrap my head around," Elgar said.

"(We were) pretty much out-skilled in all three departments of Test cricket, failed to execute the basics."

The second and final Test, also in Christchurch, starts on Friday.

© Copyright 2022 Reuters Limited. All rights reserved. Republication or redistribution of Reuters content, including by framing or similar means, is expressly prohibited without the prior written consent of Reuters. Reuters shall not be liable for any errors or delays in the content, or for any actions taken in reliance thereon.
Related News: New Zealand, South Africa, Matt Henry, Tim Southee, Proteas
COMMENT
Print this article 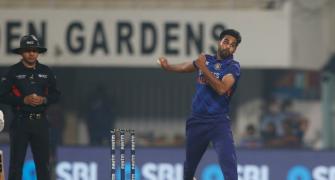 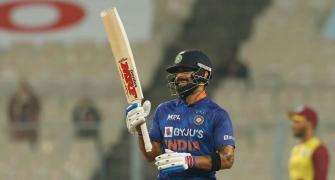 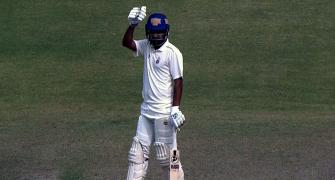 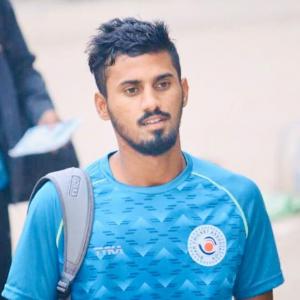 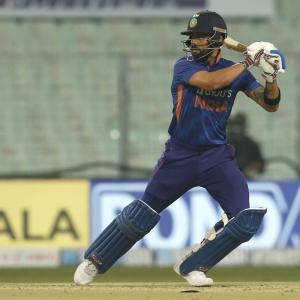