Openers Abhinav Mukund and Robin Uthappa bulldozed the North Zone bowlers to script a brilliant run chase as South Zone clinched the Duleep Trophy with a day to spare in Visakhapatnam on Saturday.

Abhimanyu Mithun (3/42), Pragyan Ojha (3/94) and Srinath Aravind (3/76) scalped three wickets each to dismiss North Zone for 317 in their second innings to set themselves a target of 178 runs.

Mukund (63 not out) and Uthappa (71) then raised a whirlwind with a plethora of strokes to pile up a 100-run opening partnership in just 13.5 overs and set the foundation of a well-deserving win.

Uthappa blasted eight fours and three sixes in his 45-ball innings before he was caught by Surul Kanwar in the deep off Sumit Narwal's bowling when he tried to go for another big hit.

After Uthappa's departure, new batsman Amit Verma was sent back quickly after being caught and bowled by Yashpal Singh.

But Mukund and Manish Pandey (37) ensured that their chase is not derailed and added 66 runs for the third wicket before the latter was dismissed by Yashpal in the 23rd over.

However, Mukund stood there as a pillar and saw his team through as they reached the victory target of 178 losing just three wickets in 23.4 overs, with a day to spare at the Dr YS Rajasekhara Reddy ACA-VDCA Cricket Stadium.

Earlier resuming at 50/1, North Zone's overnight batsman Nitin Saini went on to complete his half-century. But his partner Mandeep Singh was dismissed at 22 by Srinath Aravind in the 34th over.

However, Saini added 58 runs with Mithun Manhas (79) before becoming Ojha's second wicket. Manhas and Paras Dogra (44) then shared a 85-run partnership before the former was sent packing by Aravind, triggering a collapse.

Dogra was later dismissed by Ojha, while Uday Kaul (3) was removed by Aravind, his third victim of the day.

Narwal stayed for just four balls and was dismissed by Mukund and it took Yashpal (42 not out) and skipper Amit Mishra (30) to provide some respectibility to their second innings score. 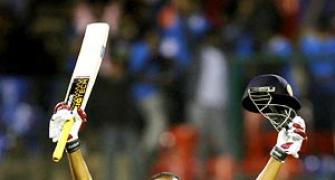 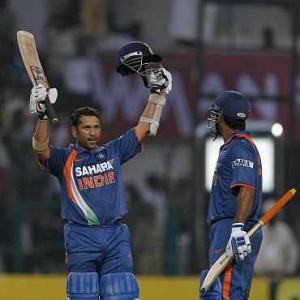 'I pray we win the Cup for Tendulkar'