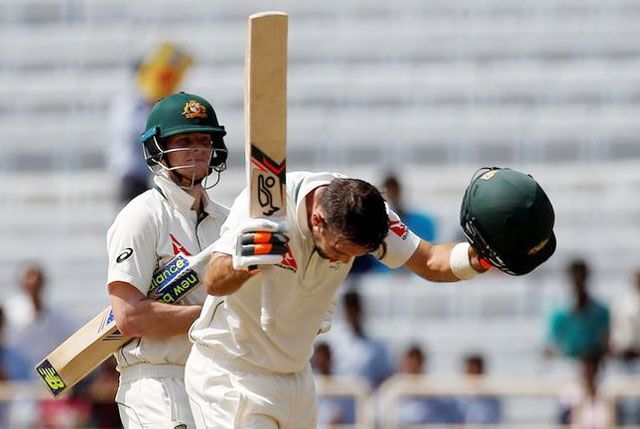 Statistical highlights from the second day’s play of the third cricket Test in Ranchi.

# Glenn Maxwell (104 off 185 balls) has posted his first century in Tests to become the first Australian number six batsman after Steven Smith (100 vs South Africa at Centurion in February 2014) to hit a hundred.

# Maxwell is the second Australian player to register a hundred each in all three formats in international cricket. He had scored 102 in an ODI vs Sri Lanka at Sydney on March 8, 2015 and 145 not out in a T20I vs Sri Lanka at Pallekele on September 6, 2016.

# Smith (178 not out) is the first Australian captain to post an innings of 150 or more in India, eclipsing the 130 off 246 balls by Michael Clarke at Chennai in February 2013. Smith is also the only Australian skipper to record two centuries in Tests in India -- both in the current rubber.

# Smith's innings is the third highest by an Australian batsman in Tests in India -- the top two being 210 by Dean Jones at Chennai in September 1986 and 203 by Matthew Hayden at Chennai in March 2001.

# Smith's unbeaten 178 is the third highest by an Australian captain in Tests in Asia -- the top two being 334 not out by Mark Taylor vs Pakistan at Peshawar in October 1998 and 235 by Greg Chappell vs Pakistan at Faisalabad in March 1980.

# Nine Australian captains have managed 10 hundreds in Tests in India.

# Smith and Maxwell were associated in a stand of 191 -- the highest fifth-wicket partnership by an Australian pair vs India in India.

# The partnership is the fourth highest by a visiting pair for this wicket on Indian soil -- the highest ever being 256 by South African pair, Abraham de Villiers & Jacques

Kallis at Ahmedabad in April 2008.

# Ravindra Jadeja has taken five wickets or more in an innings three times vs Australia -- eight times in Tests overall.

# With a tally of 17 wickets, Jadeja is the highest wicket-taker in the series so far. Ashwin, with 16 wickets at 26.31, has the next best tally.

# Jadeja has claimed two five-wicket hauls for the second time in a Test series -- the first occasion being vs South Africa in India in 2015-16.

# Since putting on 108 by Cheteshwar Pujara and Murali Vijay at Delhi in March 2013, the 91-run stand by KL Rahul and Vijay is India's highest opening stand vs Australia in 14 innings.

# Rahul's 67 is his fourth fifty vs Australia – his fifth in Tests.