The Delhi right-hander, who played his last Test against Australia in 2013, was a destructive hitter at the top of the order with a penchant for striking boundaries.

The Delhi-born player is the only Indian batsman to make two Test triple centuries and he became the second player from any country, after his compatriot Sachin Tendulkar, to score a double hundred in a one-day international.

284 Runs scored by Sehwag on Day 2 of the Brabourne Test match against Sri Lanka in 2009-10, most by an Indian and third most by any batsman in a single day’s play in Tests after Don Bradman’s 309 and Wally Hammond’s 295.

278 Balls taken by Sehwag to race to his triple hundred against South Africa at Chennai in 2007-08 -- fewest by any batsman in Test cricket for complete a triple century.

228 Runs scored by Sehwag on the first day of Multan Test -- most by an Indian batsman on the opening day of a Test match.

219 Runs scored by Sehwag against West Indies at Indore in December 2011 -- then the highest individual score in ODIs, subsequently bettered by Rohit Sharma. Though his innings is now the third highest in ODIs (after Rohit's 264 and Martin Guptill’s 237 not out), it still is the highest score by a captain in ODIs.

104.93 Sehwag’s strike-rate in his innings of 319, the highest for any batsman hitting a triple century. 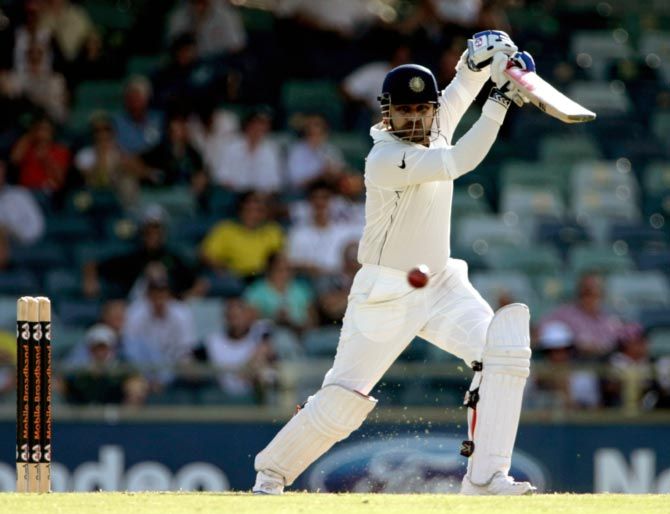 99 Runs scored by Sehwag before lunch on the opening day of the second Test against West Indies at Gros Islet, in 2006. He narrowly missed becoming the fifth player in the history of Test cricket to score a hundred before lunch on first day of a Test.

91 Number of sixes Sehwag hit in Test matches, the most by an Indian. Overall, he finished fifth behind Adam Gilchrist (100), Chris Gayle (98), Jacques Kallis (97) and Brendon McCullum (95).

82.23 Sehwag's career strike-rate in Tests, the highest for any batsman with 2000 or more runs in Tests.

60 Number of balls taken by Sehwag to reach his hundred against New Zealand at Hamilton in 2009 -- then the fastest by an Indian in ODIs (subsequently bettered by Virat Kohli). It still is the fastest hundred by an Indian batsman outside India.

47 Number of boundary fours hit by Sehwag during his 254 against Pakistan at Lahore in 2005-06, the second-most by any batsman in a Test innings after England's John Edrich, who hit 52 boundaries against New Zealand in 1965. 22 Number of balls taken by Sehwag to score his fifty against Kenya at Paarl in 2001, the fastest by an Indian outside India (along with Kapil Dev and Yuvraj Singh)

11 Consecutive Tests in which Sehwag scored a fifty between November 2009 and October 2010 -- an Indian record he shares with Gautam Gambhir.

11 Consecutive hundreds in which Sehwag went past 150, a record not even held by Don Bradman!

6 Number of double hundreds scored by Sehwag -- most by an Indian along with Sachin Tendulkar. 3 Number of times Sehwag scored 100 runs in a session -- most by an Indian in Tests.

2 Number of batsmen to have been dismissed in the 90s, 190s and 290s in Tests. Sehwag was the first to suffer this fate, England’s Alastair Cook is the only other player to do so.

2 Number of batsmen to make more than 60 percent of the team's runs while carrying bat through a completed Test innings -- England's Graham Gooch and Sehwag.