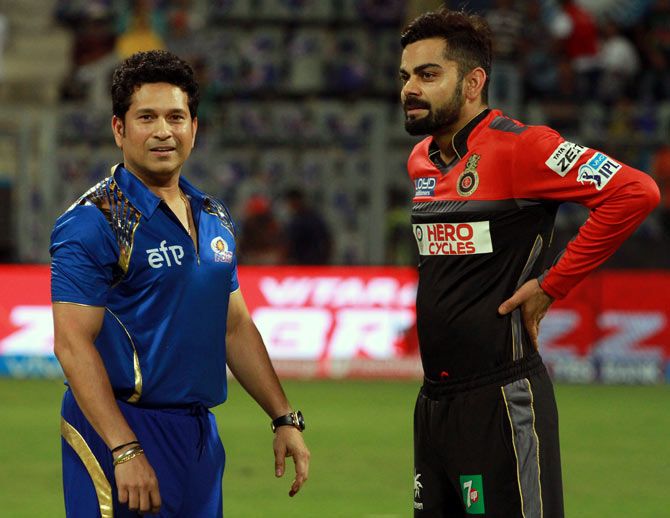 IMAGE: The debate as to who is the better batsman between Sachin Tendulkar and Virat Kohli may never end. Photograph: BCCI

Sachin Tendulkar holds most of the major batting records in cricket.

Before his current slump -- he hasn't scored a century in two years and counting -- Virat Kohli was tipped to break most of those records. We wager that Kohli will come out all blazing this year and do what we all expect him to -- stun spectators the way his idol once did.

But who's better between the two?

This question was asked to Tendulkar when he sat down with American journalist Graham Bensinger for an interview.

The Master Blaster had the most perfect response up his sleeves when this question popped up. 'How about having both of us in one team?' Tendulkar responded.

A few years ago, Kohli was asked about the comparisons between him and Tendulkar. Virat said he stood nowhere in front of Tendulkar in terms of skill level.

'You can only compare those who are worthy of the comparison. You are comparing me to someone because of whom I started playing cricket in the first place. I stand no chance in terms of skill level. He's the most complete batsman ever. Then how can you even compare?' Kohli had then asked Gaurav Kapur on Breakfast with Champions'.

'I've always said its not fair to him. Because of what he's given us, he doesn't deserve to be compared to us. This generation, no chance,' Kohli, who memorably hoisted Tendulkar during the lap of honour after India won the World Cup at the Wankhede stadium on April 2, 2011, added.

Kohli and Tendulkar have many stories together. One of the most heart-warming exchanges between the two took place after Tendulkar's farewell Test in Mumbai in 2013.

'Oh, I still remember it. I had just returned to the change room and I was in tears. Till then, I knew that yes, I am going to retire, but when that ball was done, I said to myself, 'Ok, that's it. Never ever in your life you will walk out on the field as an international player for India'.'

'So I was sitting in one corner alone with a towel on my head and wiping tears. I was really emotional and couldn't control my tears. Virat came to me at that time, and he gave me the sacred thread that his father had given him,' Tendulkar told Bensinger.

'I kept that for a while and returned it to him... told him it is priceless. This has to stay with you. This is yours and no one else's. You should have it till your last breath. And I gave it back to him. So that was an emotional moment... Something that will always be with me in my memory forever.'

About two years ago, Kohli, also speaking to Bensinger, had spoken about the special moment. He went on to describe that at that particular moment, the thread was the most special belonging he had, and as a gesture of his respect and admiration for Tendulkar, he had no hesitation in presenting it to him.

'We usually wear threads around our wrists. In India, a lot of people do. So my father gave one to me which he used to have. So I used to keep that in my bag. And then I thought this is the most valuable thing I have so it was like 'My father gave this to me and I couldn't give you anything more valuable.'

'I just want you to know how much you have inspired me and how much you mean to all of us,' Kohli had said. 'This is my little gift to you.' 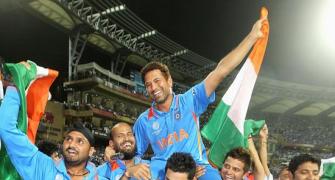 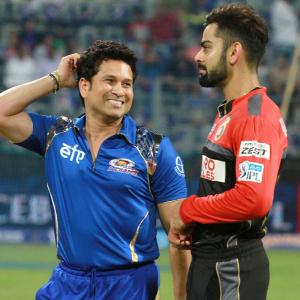