Sachin Tendulkar, on Wednesday, fulfilled his long cherished dream of living in a house of his own as he moved into a sprawling bungalow at Perry Cross Road in suburban Bandra, Mumbai.

Tendulkar has shifted his residence from La Mer Housing Society, also in Bandra west, to the spacious villa that is spread over 6,000 square feet.

"Everyone has a dream of owning a house. I, too, had this dream. I am happy that I was able to fulfil it. The flat where I earlier used to live, I had received it under the sports quota. I have now vacated that place, so that some other sportsman can live there," he said. 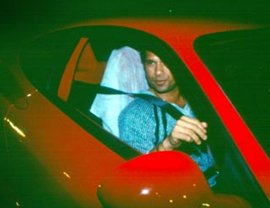 "We had done the 'gruha shanti' and 'vastu-puja' on June 11, before I left for England. I could not visit Mumbai after that, but now that I am in the city, today I brought my mother to show the place," the senior cricketer said.

"I have also lived here after the puja. But I have not been able to bring the children here yet," he said.

The batting maestro's new home has been reconstructed on a plot that earlier housed a dilapidated bungalow, which Sachin had bought for Rs 39 crore in 2007.

The villa has been secured with high-walled fencing to avoid curious onlookers. CCTV cameras and sensors have also been installed.

Besides the three storeys above the ground level, the villa, designed after taking into consideration Tendulkar's likes and dislikes, reportedly has two underground basements.

According to sources close to Tendulkar, 90 per cent of the shifting process has been completed.

A temple, drawing and dining rooms, besides arrangements for displaying various awards and trophies won by Tendulkar, who holds most of the batting records and is one short of completing a century of international tons, will occupy most of the ground floor.

The first basement will house servant quarters and master surveillance room, while the second basement has been kept for Tendulkar's passion -- cars. It is said to have a parking capacity of a large number of cars.

Besides all these, there is a swimming pool on the terrace of the house, reports said.

Tendulkar is currently out of action as he is suffering from an inflammation on his toe. He missed the five ODIs against England and he is not playing in the ongoing Champions League Twenty20 tournament. He's likely to miss at least the first two ODIs against the visiting England side next month.

Asked about the status of his injuries, Tendulkar refused to comment.

Meanwhile, chaos prevailed just before Tendulkar spoke to the media, after a big crowd, including school children between the age group of five and eight years, had gathered outside the new villa to catch a glimpse of him.

With the waiting mediamen and the fans getting impatient, a commotion occurred which resulted to a few children suffering minor injuries.

Earlier in the morning, members of the Awami Welfare Association Maharashtra, got into an argument with the members of the housing society, opposite Tendulkar's villa, over displaying a welcome banner for the champion cricketer.

However, the matter was soon resolved and the banner was finally put up. 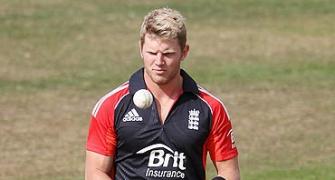 Meaker gets England call-up, Pietersen recalled for India tour
Terror-hit Delhi HC to get 49 more CCTV cameras
US outlines the road ahead for nuke deal with India 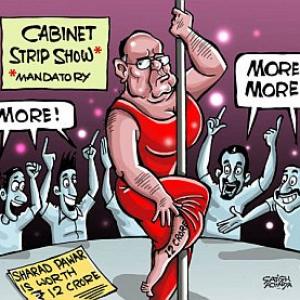 Is this cartoon obscene? Mumbai Police thinks so!