So Virat Kohli finally won the toss in his last IPL game this season and decided to field.

Hyderabad Captain Kane Williamson (70 offf 33) clobbered Umesh Yadav in the last over to take 28 runs off him and prop Bangalore to a challenging 175/7.

Hyderabad bowlers gave the team a good start -- Parthiv Patel, Virat Kohli and A B de Villiers were all dismissed inside 3 overs with Bangalore's score reading 20/3.

In walked Shimron Hetmyer and giving him good company at the other end was Gurkeerat Singh Mann.

While Gurkeerat played second fiddle, Hetmyer took charge and battered the bowling all around the park. He got going after the 10th over and took a liking to Afghan duo Rashid Khan and Mohammad Nabi, hitting them for towering sixes and fours.

The Bangalore batsmen kept the strike rotating along with getting the big sixes as they brought up the 100 in the 12th over.

In the next over, Hetmyer was dropped by Yusuf Pathan off Bhuvaneshwar Kumar and the West Indian made the most of the reprieve.

Gurkeerat and Shimron kept the runs flowing at both ends and brought up the 100 run partnership in the 14th over.

Both batsmen completed their 50s and with 25 needed off the last 3 overs, Rashid was brought back into the attack. Hetmyer send him into orbit with back-to-back sixes before he holed out to Pathan in the deep.

The damage had been done by then and even as Gurkeerat and Sundar were the next wickets to fall, with six needed off the last over, Umesh Yadav hit back-to-back boundaries to take RCB over the line and end their nightmare campaign on a winning note. 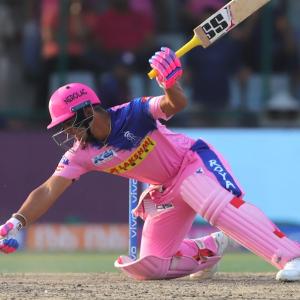