Zaheer Khan bagged a five-wicket haul before Aditya Tare struck a strokeful century as Mumbai took a substantial lead after posting 198 for two in the second innings over Delhi in their Group A Ranji Trophy match in Mumbai.

Mumbai batted the second time after Delhi were all out for 324 in their first innings, exactly the same score the hosts had put up in their first essay at the Bandra Kurla Complex.

For Delhi, veteran batsman Mithun Manhas scored a patient 113 off 196 balls and hit 18 fours and a six but it was Tare, who hogged the limelight with his unbeaten 115 off 125 balls. The 25-year-old Tare found the fence 20 times.

Seeking to make a comeback into the Indian team, Zaheer picked up 5/88 as Mumbai bowled the visitors out in 98.4 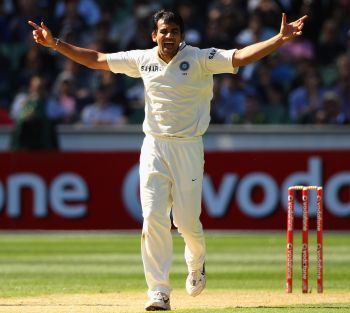 In their second innings at stumps, Tare was batting in the company of Siddhesh Lad, who was unbeaten on 67. He hit six fours and two sixes while facing 86 balls.

Vadodara: Arindam Ghosh hit an unbeaten double hundred to help Railways take control of their Ranji Trophy match against Baroda as they posted 441 for eight declared in their first innings on day 3.

Ghosh came up with an unfinished 380-ball 208 after starting the day at 76 with Railways on 208 for three. Ghosh blasted 24 boundaries and a couple of sixes in his innings.

Harshad Rawle was the first to be dismissed today after he could only add 10 runs to his overnight score of 50.

Mahesh Rawat (67) gave Ghosh good company in the middle, hitting a fifty which was laced with six fours.

The fourth wicket partnership between Ghosh and Rawle (60) added 147 runs followed by the fifth wicket stand of 171 runs between Rawat and Ghosh.

In their second essay, Baroda lost the wicket of Aditya Waghmode (1), while Sourabh Wakaskar (27) and Abhimanyu Chauhan (4) were at the crease when the stumps were drawn for the day.

New Delhi: Robin Bist and Rajesh Bishnoi slammed centuries as Rajasthan overhauled Services' first total by reaching 345 for three in their first innings on the third day of their Group A Ranji Trophy match against Services.

Bist (batting on 107) and Bishnoi (117) shared a huge 210-run stand for the third wicket to take Rajasthan to an unbeatable position with one day left in the match.

Services had made 325 all out in their first innings from 105.2 overs.

Rajasthan added 214 runs today after resuming the day at 131 for two and they now have a first innings lead of 20 runs.

Bishnoi, who was the last man out, hit 13 fours and a six from the 267 balls he faced while Bist had so far consumed 344 deliveries in his unbeaten knock of 107 which he made with the help of seven fours and a six.

Pacer Suraj Yadav broke the third-wicket partnership in the final session of the day as he had Bishnoi caught behind by wicketkeeper Nakul Verma.

Captain Ashok Menaria was giving Bist company on four at the draw of stumps.

Services bowlers had to toil hard all day long as they could grab just one wicket -- that of Bishnoi off Suraj Yadav -- at the Model Sports Complex at Palam.

Anantpur: Opener Dheeraj Jadhav (158) struck a brilliant century to guide Assam to a crucial first innings lead against Andhra in their Ranji Trophy group C match, as they ended day three on 352 for seven.

Jadhav's knock comprised of 21 boundaries and a six and the 35-year-old added a 179 runs with Niraj Patel (70) for the fifth wicket to help his side go past Andhra's first innings total of 297.

Nagpur: Riding on an unbeaten century from Faiz Fazal, Vidarbha posted 199 for three on the third and penultimate day of their Ranji Trophy Group A match against Odisha.

Vidarbha though still trail the visitors by 254 runs with seven wickets remaining. Odisha had earlier declared at 453 for six in their first innings.

Resuming on 14 for two, the hosts added 185 runs by losing just one wicket on the entire day. Overnight batsman Fazal, starting on 10, went on to score a patient century.

Fazal also put on an important 100-run stand with Shalabh Shrivastava (27) for the third wicket before joining hands with Hemang Badani to share an unbeaten 85 runs for the fourth wicket.

Shrivastava was the only batsman to be dismissed but with that being a run out, the bowlers had nothing to show for.

At stumps on day three, Fazal remained unbeaten on 124 off 296 balls studded with 16 fours, while giving his company at the other end was Hemang Badani on 32.

UP in trouble against Saurashtra

Rajkot: Saurashtra took complete control of their group B Ranji Trophy match against Uttar Pradesh by first amassing 632 runs and then sending four batsmen of the rival team to pavilion.

Replying to Saurashtra's 632/7, the visitors were 226 for four, losing among others the in-form captain Suresh Raina, at the Saurashtra Cricket Association (SCA) stadium at Khandheri.

Parvinder Singh (26) and Arish Alam (33) were at the crease at the end of the third day's play. The visitors need another 256 runs to avoid follow-on.

Replying to Saurashtra's 632 for 7, the Uttar Pradesh's first challenge was to avoid follow-on. Abhishek Bhatt gave the hosts first breakthrough when he trapped Tanmay Srivastav (7) in front of wicket in the fourth over.

Mohd Kaif and Mukul Dagar added 139 runs for the second wicket, before left-arm seamer Jaydev Unadkat struck twice dismissing Kaif (49) and then captain Suresh Raina (10) in quick succession reducing the visitors to 164 for 3.

Dagar, who held one end, was caught by Kamlesh Makwana off Dharmendra Jadeja after making a composed 92 occupying the crease for three hours facing 135 balls with 16 fours and a six.

Parvinder Singh and Arish Alam made sure there was no further damage by adding 59 runs for the unbroken fifth wicket partnership.

For Saurashtra, Unadkat took two wickets conceding only 15 runs in his 15 overs while Abhishek Bhatt and Dharmendra Jadeja shared a wicket each giving away 31 runs and 89 runs respectively.

Earlier, resuming at overnight 570 for 7, Kamlesh Makwana and Dharmendra Jadeja continued to frustrate the UP bowlers and stretched the Saurashtra total to 632 before the hosts skipper declared the innings.

Makwana, who was batting on 63 yesterday, completed his second century of the career and remained unbeaten on 101 in the company of Dharmendra Jadeja (20) as the two added 66 runs without getting separated.

Rohtak: Fast bowlers Shankar Rao and Varun Aaron shared seven wickets as Jharkhand dismissed Haryana for 123 in their second innings and then reached 74 for three at stumps on day 3 of the Group A Ranji Trophy match at Bansi Lal Cricket Stadium.

The 30-year-old Rao sent down a fiery spell and captured four top-order batsmen early on after Haryana came out to bat for the second time, following the dismissal of Jharkhand for 231 in their first innings on Friday.

Sachin Rana was the highest scorer as he hit 84 off 142 balls with the help of eight fours and three sixes.

In their second essay, Bhavin Thakkar (29) and Ishank Jaggi (27) were at the crease when the stumps were drawn with Jharkhand still needing 128 runs with seven wickets in hand.

Maha-Hyd tie heads for a draw

Hyderabad: With the match heading towards a tame draw, Maharashtra are likely to take the first innings lead as Hyderabad finished the third and penultimate day at 290 for four, still trailing the visitors by 326 runs, in their Ranji Trophy Group C tie.

In reply to Maharashtra's massive 616 for nine declared, Hyderabad reached 290 for four in their first innings at close of play.

Starting the day on 53 for no loss, Hyderabad lost overnight batsman TL Suman, who resumed on 28, early.

But after Suman departed for 73-ball 43, other overnight opener Akshanth Reddy (86) along with D Ravi Teja (98) put on a 137-run partnership for the second wicket.

Both Reddy and Ravi Teja completed their half-centuries but unfortunately fell short of scoring a century.

Ravi Teja, whose knock came off 195 balls with 13 fours, missed the ton by just two runs. He, however, put on another important 51-run stand with Hanuma Vihari for the third wicket.

At stumps, Vihari was unbeaten on 39, while Syed Quadri was giving him comapny at the other end on five.

Bengal stare at defeat vs MP

Kolkata: Bengal stared at a humiliating defeat on home soil after off-spinner Jalaj Saxena returned with a career-best six wicket haul to put Madhya Pradesh on course for an outright win in the Ranji Trophy Group B league match.

On an Eden Gardens strip that had little to inspire the bowlers, Saxena exploited Bengal batsmen's poor temperament to bundle out the hosts for 263, with a first innings deficit of 168 runs.

Saxena took six for 53 but it was left-arm spinner Ankit Sharma who triggered the Bengal collapse with 3 for 53.

Following on, Bengal were 43 for no loss at stumps on the penultimate day as they still require 125 more to avoid an innings defeat and make Madhya Pradesh bat again.

Resuming at 117/1 with Arindam Das in his overnight score of 70, Bengal needed to show some application and bide time.

But their batsmen's inability to stay at the crease that has been their major worry for last couple of seasons once again haunted them as they lost their last eight wickets for 68 runs to brighten MP's hope for a second consecutive outright win against Bengal in the Ranji Trophy.

Sharma gave the first breakthrough in the very second over of the day with a classic leg cutter that rocked Anustup Majumdar's offstump.

Playing sluggishly, Das completed his ninth firstclass century just before the lunch but only to be dismissed by Sharma.

In fact post-lunch Bengal were in a comfortable position (195/2) to avoid the follow-on but Saxena brought on the collapse as he bettered his 6/106 against New Zealand A earlier in August.

Das was unbeaten on 19 from 81 balls, while Rohan Banerjee was on 24 having faced an equal number of deliveries as Bengal will now need a miracle to avoid the defeat.

Having already ensured three points by virtue of their first innings lead, Madhya Pradesh will be keen to inflict yet another outright defeat on Bengal.

Madhya Pradesh boast of a fine record against Bengal, having defeated them comprehensively in Indore last season for six points, while in 2011-12 they walked away with three points chasing down 496 in the first innings at JU Saltlake campus. 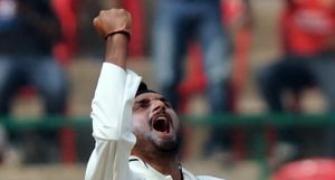 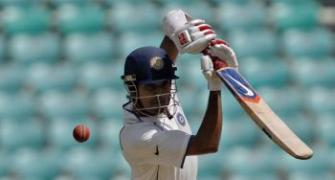 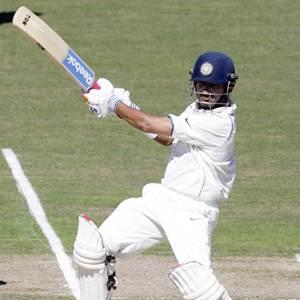 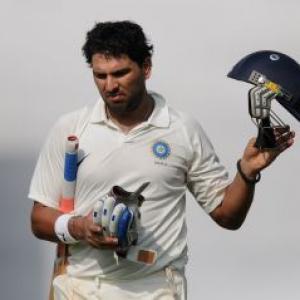