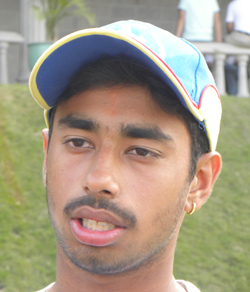 A superb spell of spin bowling by teenager Aushik Srinivas ensured Tamil Nadu three points in their Ranji Trophy Super League encounter against Mumbai at the MCA Complex, in Mumbai, on Friday.

The 16-year-old finished with impressive figures of seven for 107, including six of the seven Mumbai wickets to fall on the fourth and final day of the match, to help his side skittle out the hosts for 366 in their first innings.

Tamil Nadu scored 253 for 3 in their second innings, with Murali Vijay registering a majestic 118-ball 154, that comprised 20 hits to the fence and five over it.

Arun Karthik scored a patient 60, and his second wicket stand with Vijay yielded 168 runs for the visitors.

Mumbai's collapse was shocking considering they began the final day comfortably placed on 308 for three. Srinivas's brilliant spell meant they lost their last seven wickets for just 58 runs. The youngster, who had accounted for Ajinkya Rahane (98) on the third day, added the prized wicket of skipper Wasim Jaffer (141) to his kitty besides accounting for Abhishek Nayar (16), Ramesh Powar (0), Iqbal Abdullah (0), Dhawal Kulkarni (0) and Usman Malvi (4).

Ganapathy took the only other wicket to fall -- the day's first  trapping Onkar Khanvilkar (22) up front after just six runs had been added to the overnight total.

With a result out of question, after the visitors had batted for almost two days to post 501 in their first innings, the best Mumbai could have hoped for was to take three points from the game on the basis of a first innings lead. Alas, they had to settle for only one.

The draw strengthened Tamil Nadu's lead at the top of Group A, with 23 points from six matches, while keeping Mumbai in third place with 16.

The defending champions play Gujarat in their final group match, starting Tuesday at the Brabourne stadium.

Delhi kept their quarter-final hopes alive after a comprehensive 10-wicket victory over Maharashtra in their fifth Ranji Trophy Super League Group B.

Their second successive victory gave Delhi six points, taking their overall tally to 15. Virat Kohli's side now needs to beat Bengal in their final group engagement to snatch a berth in the quarter-finals.

After Pradeep Sangwan's five-wicket burst reduced them to 334 for nine at stumps on Thursday, Maharashtra's innings folded after adding just 25 runs to the overnight total.

Parvinder Awana had Samad Fallah (28) caught by Aditya Jain to bring down the curtains on Maharashtra's innings.

Manhas gave him good support with a 49-ball 38, which included five hits to the fence.

Delhi's final league engagement is an away tie in Kolkata from December 15.

Hyderabad: T P Singh slammed a brisk century while V Cheluvaraj missed his ton by seven runs as Railways boosted their quarter-final chances with the three points they gained from a draw against Hyderabad in the Ranji Trophy Super League match.

Having posted 305 in their first innings, Railways restricted the hosts to 303 and that wafer-thin two-run first innings lead proved crucial in the Group A match, which ended in a tame draw on Friday.

Hyderabad got just one point from the outing.

Resuming their second innings on 18 for no loss, Railways got some batting practice in putting up 363 for five at stumps on the final day.

Faiz Fazal (49) and skipper Cheluvaraj (93) added 145 runs for the opening stand but both had the misfortune of missing individual landmarks.

Mohammed Khader first dismissed Fazal when the batsman was just one run shy of his fifty, and got the better of Cheluvaraj, Anirudh Singh taking his second catch of the day.

T P Singh and Yere Goud (72), however, made merry and remained not out.

Chandigarh: Orissa earned vital three points on the basis of their first innings lead as their Ranji Trophy Super League Group A match against Punjab ended in a tame draw.

Set a target of near impossible 354 runs, Punjab ended the fourth and final day on 192 for four after 66 overs to get one point from the match at Sector 16 cricket stadium.

Uday Kaul was Punjab's top-scorer with an unbeaten 73, which he made from 177 balls with the help of 13 fours. Vishwas Bhalla also remained not out on 24 while captain Pankaj Dharmani contributed 40.

For Orissa, Debasis Mohanty took two wickets by conceding 39 runs while Alok Sahoo and Dhiraj Singh got one wicket apiece.

Earlier, Orissa added 51 runs in the 15.3 overs they faced today without losing any more wickets before declaring their innings at 247 for eight.

Halhadar Das (67 not out) added another 28 runs to his overnight 39 while Basanth Mohanty (27) added 16 to his Thursday's 11. The duo shared 74 runs for their unbroken ninth wicket stand.