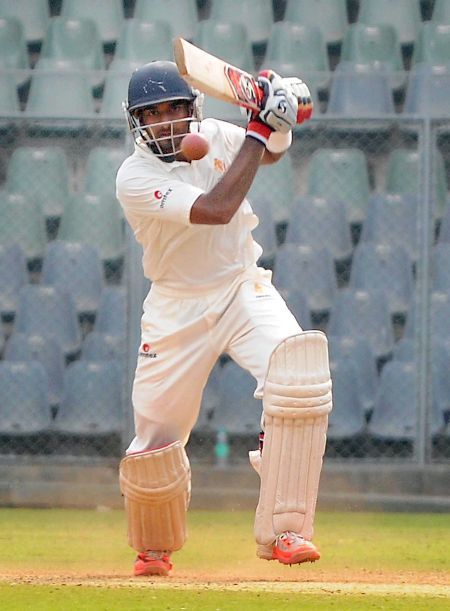 Defending champions Karnataka, already assured of topping Group A, ended the second day on 175 for two in reply to Mumbai's tall first innings total of 436 in their Ranji Trophy league game.

Karnataka first dismissed the home team, who added 94 runs to their overnight score of 342 for five, 37 minutes before lunch. The visitors then rode on some steady top order batting to finish the day just 261 runs behind the 40-time champions' total on a slow Wankhede Stadium track, where the odd ball had started to turn.

At stumps, opener Ravikumar Samarth was unbeaten on 85 having hit eight fours in his 188-ball knock, along with No. 4 batsman Manish Pandey, who had faced 15 balls and was yet to score.

The batsmen out were opener Robin Uthappa (49) and Kunal Kapoor (35) who got the starts but then fell leg before.

Earlier, Mumbai's young batsmen Siddesh Lad and Nikhil Patil completed well-deserved individual hundreds before departing after scoring an identical 106, having commenced the day on 94 and 85, respectively.

Lad, who was dropped twice yesterday, hit 20 fours in his 135-ball knock, was dismissed by rival skipper R Vinay Kumar when he edged the pacer to wicketkeeper C M Gautam. It provided the visitors the eagerly awaited breakthrough in the morning after the sixth wicket duo had rescued Mumbai with a superb stand of 190 in 272 balls.

Shardul Thakur was dismissed by off spinner Udit Patel for 15 and then Patil was sent back by Srinath Aravind, edging to lone slip fielder Pandey, having faced 172 balls and struck 13 fours and 2 sixes.

For Karnataka, captain Vinay Kumar was the most successful bowler with a haul of 4 for 88, while Patel (3 for 96), Aravind (2 for 91) and leg spinner Shreyas Gopal (1 for 91) were the other wicket takers.

Patiala: Punjab lost their last five wickets for 20 runs but did enough to take first innings lead against Delhi in their final Ranji Trophy encounter.

However, Delhi were 48 for no loss in their second innings with an overall lead of 34 runs. However Punjab needs an outright win to qualify after losing their last game to Odisha and for that need to keep Delhi under check in the second innings.

Punjab were comfortably placed at 243 for five before the collapse started and the home team lost five wickets for 20 runs in exactly eight overs.

For Punjab Mandeep Singh (82) was the top-scorer while Gurkeerat Singh Mann (57) and Himanshu Chawla (50) also made useful contributions.

Left-arm spin duo of Varun Sood (4/73) and Manan Sharma (3/51) shared seven scalps amongst them while off-spinner Shivam Sharma got two for 26.

Vadodara: Pacer Sagar Mangalorkar ran through the Tamil Nadu batting line-up with a brilliant bowling show of 7/49 as Baroda shot the visiting side for 188 to give a strong fightback on the second day of their Ranji Trophy match.

Mangalorkar dismissed six Tamil Nadu batsmen after taking a wicket on Friday as the visiting side folded at 188 from 90 overs in their first innings in reply to Baroda's 149 all out at the Moti Bagh Stadium.

Tamil Nadu added 111 runs from 58 overs after resuming the day at 77 for two.

Baba Indrajith top-scored for Tamil Nadu with 37 not out while Baba Aparajith and Murali Vijay contributed 35 and 32 respectively.

For Baroda, Irfan Pathan and Vishnu Solanki also took a wicket each, besides the seven by Mangalorkar.

In their second innings, Baroda were 73 for three at the draw of stumps with Deepak Hooda (0) and Yusuf Pathan (14) batting at close of play.

Baroda are now ahead by 34 runs with seven second innings wickets in hand.

Saif, Chawla keep UP in fight vs Railways

New Delhi: Debutant left-hander Mohammed Saif batted with a lot of determination as his unbeaten 84 kept Uttar Pradesh in the hunt for three points against Railways in a Ranji Trophy cricket match.

Saif along with veteran all-rounder Piyush Chawla (53 batting) added 101 runs for the unbroken eighth wicket stand as UP reached 266 for seven responding to Railways' first innings total of 345.

Earlier, newly appointed skipper Praveen Kumar (6/74) knocked out the last Railways wicket early in the day to wrap up the innings at 345.

In reply, UP lost the top six for less than 100 runs with only Praveen smashing 30 with five fours and a six in his customary style.

The first notable partnership came when Ekalavya Dwivedi (42) joined Saif to added 70 useful runs for the seventh wicket. When Dwivedi was bowled by left-arm spinner Ashish Yadav, UP were still in trouble at 165 for seven and 31 runs needed to avoid follow on.

But Chawla counter-attacked as he hit three sixes and five fours in 73 balls while Saif consumed 200 balls hitting 13 boundaries.

Indore: Young left-hander Sudeep Chatterjee showed loads of composure as he hit his seventh half-century in first-class cricket but Bengal are in trouble at 108 for three at stumps after Madhya Pradesh piled up a mammoth 514 for six in a Ranji Trophy match.

Sudeep scored 58 off 109 balls with nine boundaries and added 52 for the opening stand with Abhishek Das (24) even though Abhimanyu Easwaran (0) and Manoj Tiwary (8) were dismissed cheaply.

After twin centuries by opener Aditya Srivastava, who struck a career-best 151, it was veteran skipper Devendra Bundela, in his 20th first-class season, scored a quickfire unbeaten 81 off 71 balls with six fours and three sixes, to prop up the score.

He added 97 in less than 18 overs with another domestic veteran Mohnish Mishra (56, 62 balls) who hit six fours and two sixes. For Bengal, offie Saurashis Lahiri got 3 for 105 but it was more about MP batsmen trying to hit them out of park.

Hyderabad: Captain Bipul Sharma cracked a magnificent 176 to be the second centurion of his team as Himachal Pradesh piled on a mammoth 511 all out on the second day of their Ranji Trophy match against Hyderabad.

Sharma added 93 runs today after resuming the day at his individual score of 83 as HP rattled up 242 runs from 68.5 overs from their overnight 269 for 5 to put themselves in a strong position in the Group C match at Rajiv Gandhi International Stadium at Uppal.

Sharma hit 18 boundaries and five sixes in his 292-ball knock and shared 249 runs for the sixth wicket with the other centurion Paras Dogra (137) to raise a big total for the visiting side.

Dogra, who resumed the day at his overnight 101, struck 16 fours and three sixes in his 284-ball innings. Rishi Dhawan contributed 69 not out which he made from 142 balls with the help of 11 fours.

For Hyderabad, left-arm spinner Pragyan Ojha and Bavanaka Sandeep grabbed four wickets each. Ojha, who was cleared of suspect bowling action by the BCCI only on Thursday, added one more wicket to the three he took yesterday.

In reply to Himachal's 511, Hyderabad were 36 for no loss at the draw of stumps with Tanmay Agarwal and Akshath Reddy batting on 13 and 22 respectively.

Ahmedabad: Rush Kalaria and captain Parthiv Patel starred in Gujarat's nine-wicket win over Haryana in an eventful Ranji Trophy Group B match that ended in less than two days.

As much as 26 wickets on day one of the match with Haryana and Gujarat making 129 and 125 respectively.

Left-arm pacer Kalaria ended with a nine-wicket match haul including a fifer in the second innings.

Gujarat now have 24 points from eight games and Haryana have 17 points.

Assam in commanding position against Kerala

Kannur: Dheeraj Jadhav (93) and Tarjinder Singh (94) missed out on individual hundreds but they put Assam in driver's seat against Kerala in a Ranji Trophy Group C match.

Resuming at 197 for four, Assam put on board 344 with overnight batsman Jadhav and Tarjinder doing a splendid job for the side. J Syed Mohammad also contributed 45 runs.

Assam were as good with bowling as they reduced Kerala to 52 for 4 at the end of day two with Pritam Das striking thrice.

Gautam resumed at 26 and batted his side to a commanding position. Gautam hit 18 boundaries in his 271-run ball.

Services had scored 230 runs and Jharkhand managed 387 when play on day two ended.

Image: Ravikumar Samarth plays a shot during a Ranji game 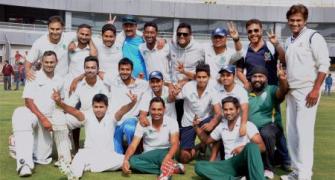 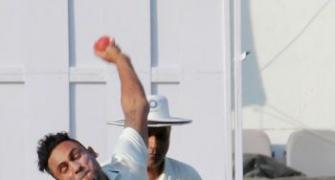 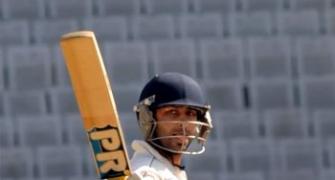 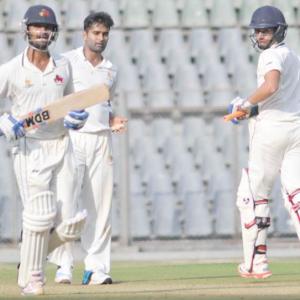 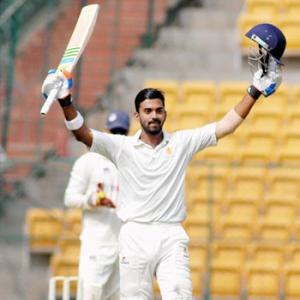