Riding on a 103-run second wicket partnership between Ravi Inder Singh (58) and Uday T Kaul (62), Punjab salvaged a draw against Mumbai in their Ranji Trophy Super League group A match in Chandigarh.

At the close of play, Punjab scored 311 runs at the loss of seven wickets in their second innings after Pankaj Dharmani (46) and Gaurav Gambhir (50 not out) too chipped in with useful contributions.

While Mumbai earned three points from the drawn match, Punjab got one.

As against Punjab's 259 all out in their first innings, Mumbai had declared their innings at 471 for nine on the penultimate day gaining a lead of 212 runs.

In reply, Punjab's Ravi Inder Singh made 58 before being caught behind stumps by Vinay Samant of the bowling of Dhawal Kulkarni when the scorecard read 109.

Kaul, on the other hand, took 150 balls to score 62 with 12 hits to fence before holing out to Khanvilkar off Rohit Sharma.

For Mumbai, pacer Zaheer Khan took three wickets, A Nayar two and by Rohit Sharma and D Kulkarni picked up one wicket apiece.

Vadodara: Delhi failed to force a win after asking Baroda to follow on and had to be content with three points from the drawn match on the basis of their first innings lead on the fourth and final day of their Ranji Trophy Super League Group B tie.

Delhi removed the last two Baroda batsmen  Ajitesh Argal (8) and Rajesh Pawar (45) -- within seven overs early in the morning to dismiss the hosts for 326 in reply to the visitors' mammoth 591 to raise hopes of a win at the Moti Bagh Stadium.

But Azhar Bilakhia (91) and Rakesh Solanki (69 not out) saved Baroda the humiliation and the home team scored 233 for four after 66 overs on the final day.

Delhi got three points by virtue of their first innings lead while Baroda had to be content with just one point.

Sumit Narwal completed his five-wicket haul, claiming both the Baroda wickets that fell today. He returned figures of 5/71 from his 21.3 overs.

Bilakhia, who made just five in the first innings, played the sheet anchor for Baroda today. He first steadied the Baroda innings with a 70-run partnership with opener Satyajit Parab for the second wicket after other opener Connor Williams fell for four with the team score reading 12.

Bilakhia, who hit 10 boundaries during his 140-ball knock, later shared a 120-run stand for the fourth wicket with Solanki before he was the last man out.

Solanki, who made 55 in the first innings, hit eight fours and a six from the 125 deliveries he faced in the second innings.

Chasing 438 for an improbable win, UP could manage 252 before being shot out in 66.2 overs with Abhimanyu, who had claimed six for 86 in the first innings, scalping five for 95 for his match haul of 11 wickets in his first class debut.

Mithun had Piyush Chawla caught by B Akhil in the third ball of the 60th over and he castled Amir Khan and RP Singh off his next two balls to complete his hat-trick.

For UP, Bhuvneshwar Kumar (63) and captain Mohammad Kaif came up with gritty centuries before Mithun ran through the middle and lower order to script an easy win that earned Karnataka five valuable points.

Resuming at 29 for one, UP lost wickets just when they needed big partnerships and Vinay Kumar started the rot, removing Ravikant Shukla in the 16th over.

Bhuvneshwar Kumar did his best, hitting 63 off 84 balls with seven fours and two sixes in it but his entertaining knock was not enough to turn the match on its head.

For Orissa, who needed 380 runs to win the tie, Rakesh Mohanty (71 not out) waged a grim battle but was stranded without partners as the visitors folded for 220 in 84.3 overs.

Patel (3/21) and Yadav (3/52) shared six wickets between themselves while Rujul Bhat claimed two for 44 to help Gujarat win five points from the tie.

Resuming on 10 for one, Orissa was gasping for breath at 88 for six after Pravajan Mullick (40) returned.

Mohanty and Subhrajit Sahoo (39) then offered a glimpse of hope, raising 84 runs for the seventh wicket that rekindled Orissa's hopes.

But once Rujul Bhatt broke the stand by removing Sahoo, Gujarat had the match in their pocket.

With an outright win not among the possibilities, it was a tug-of-war between both the sides for the crucial first innings lead and Ganapathy's grit meant Tamil Nadu won two more points than their hosts from the match.

Replying to Railways' first innings total of 327, Tamil Nadu resumed on 312 for eight with Ganapthy and Rajamani Jesuraj (8) shouldering the responsibility of bettering the hosts' total and they did not let their side down.

The duo guided Tamil Nadu to 335 when Ganapthy fell after his marathon 104-ball knock and the visitors eventually folded for 337 in 151.3 overs.

For the hosts, captain Murali Kartik (4/100) was the pick of the bowlers, while Shailender Gehlot scalped three for 70.

Railways reached 178 for two in their second essay when stumps were drawn with V Cheluvaraj (61) and TP Singh (63) in the middle.

Bose (5/57) and off-spinner Saurashish Lahiri (4/87) ran through the Maharashtra batting line- up, which frittered the advantage of a good start given by Khadiwale and Rohan Bhosale (33). The duo shared 99 runs for the opening wicket.

Bose finished with match figures of 10 for 124.

Rohit Motwani (67) and Ganesh Gaikwad (43) were the other notable run-getters for the hosts with the pair stitching together 90 runs for the sixth wicket to give Maharashtra's bowlers something to defend.

Resuming at the overnight score of 305 for seven in their second essay, the remaining three Maharashtra batsmen could only add 14 runs in 6.5 overs and eventually folded for 319, thereby setting a paltry 175 runs for victory for Bengal with more than more than two sessions to play.

Bengal's chase faltered, with Arindam Das departing for a duck and the scoreboard reading 4.

However, Deep Dasgupta (54) and wicketkeeper batsman Wriddhiman Saha (59) took Bengal closer to victory with a 119-run second wicket stand before being dismissed.

After their dismissal, Manoj Tiwary (35 not out) and Rohan Gavaskar ensured that there were no further hiccups and guided Bengal to the full five points in 54.1 overs.

Having conceded a 22-run first innings lead to the visitors, Hyderabad resumed their second innings at 101 for three, but Himachal pacer Ashok Thakur (5/22) wrecked their middle and lower order to send them packing for a meagre 189 in 77 overs.

Himachal, who had a gettable 168-run victory target, got off to a strong start, with Bhavin Thakkar (55) and Sangram Singh (27) adding 79 runs, before Pragyan Ojha (5/52) created mayhem in the top and middle orders picking wickets at regular intervals that knocked the daylight out of Himachal's victory ambitions.

For Hyderabad, T Suman also claimed a couple of Himachal top order batsmen and the visitors ended the day on 136 for eight in 41 overs. 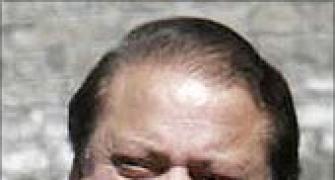 Day not far when Kashmir will be free: Sharif