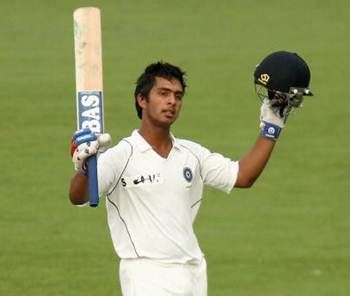 Punjab rode on a solid batting display to post a massive 560 for 6 declared before reducing Odisha to 110 for 2 in their second innings on Day 3, in their Group A Ranji Trophy match in Mohali on Tuesday.

Having bundled Odisha for 205, Punjab took a first innings lead of 355 runs.

At stumps on Day 3, Niranjan Behera was unbeaten on 42 and Govind Podder on 52.

Resuming at 306 for two overnight centurions Taruwar Kohli and Mandeep Singh gave the hosts a great start by adding 35 and 59 runs respectively to their individual scores.

The two put on a 282-run stand for the third wicket before Alok Mangaraj gave Odisha the much-needed breakthrough by seeing off Mandeep for a 229-ball 175, laced with 18 fours and two sixes.

Even the tail-enders chipped in with important runs, Mayank Sidhana (48), Amitoze Singh (56 not out) and Harbhajan Singh (49 not out) taking Punjab's score past the 550-run mark.

In their second innings also, Odisha had a poor start as they lost openers Girjia Rout (5) and Natraj Behera (8) cheaply.

But Niranjan Behera and Podder lifted the innings and ensured that there was no further setbacks.

A dominant Gujarat rode on Rakesh Dhruv's five-wicket haul, which included a hat-trick, to register an easy innings and one-run victory over Vidarbha in a Group 'A' Ranji Trophy match, in Nagpur, on Tuesday.

Vidarbha, trailing Gujarat by 219 runs in the first innings, were shot out for 218 in their second essay on the third and penultimate day at the Vidarbha Cricket Association ground.

Left-arm spinner Dhruv spun a web around the Vidarbha batsmen as he snapped up five for 21. A hat-trick in the end, which removed the tail -- Shrikant Wagh (2), Umesh Yadav (0) and Sandeep Singh (0) -- sparked off celebrations in the Gujarat dressing room.

Besides Dhruv, Jasprit Bumrah chipped in with three for 59, while Jesal Karia finished with one for 35.

Gujarat, who had bundled out Vidarbha for a paltry 85 in the first innings and then went on to score 304, maintained the upper hand on Tuesday as well to wrap up the match in style.

The hosts, after resuming their second innings at 87 for one, lost overnight batsman Amol Ubarhande, who could add just three runs to his overnight's score of six.

But opener Faiz Fazal, resuming on 48, continued the good work in the company of skipper Shalabh Shrivastava. The duo put on 49 runs for the third wicket to steady the boat.

It was Dhruv, who broke the partnership by dismissing Fazal for a patient 77 off 197 balls, studded with 12 fours.

Fazal's dismissal triggered a mini collapse as Hemang Badani (0) and Rashmi Parida (0) returned to the pavilion without troubling the scorers.

However, Ranjit Paradkar joined hands with Shrivastava to frustrate the visitors by putting on a valuable 69-run stand for the sixth wicket and keep Vidarbha's chances alive.

Dhruv once again came to Gujarat's rescue as he trapped Shrivastava LBW for a well-made 175-ball 56.

This time the visiting side did not let the advantage slip away as Dhruv quickly wrapped up the tail.

Bengal-Baroda match fails to start despite sunshine at Eden

For the third consecutive day play was not possible in the Ranji Trophy Group B match between hosts Bengal and Baroda as the umpires found the Eden Gardens not suitable.

There is no rain since Sunday, and the sun shone brightly yesterday and today, yet the match still could not get started.

All eyes are on the match, as the same pitch will be used for the opening Test between India and the West Indies in Sachin Tendulkar's farewell series.

But with the umpires calling off the proceedings for a third consecutive day, a question mark on the efficiency has cropped up ahead of the high-profile Test.

"We made three inspections and found lot of moisture in the outfield. We were forced to call off the day's action after the last inspection at 2 pm thinking about the safety of the players," match referee Manu Nayar of Delhi said.

This is the first time in many years that the Eden Gardens could not be readied for a match despite the rain stopping a day before the scheduled start.

"There were still a few damp patches on the ground. But the ground would be ready before November 6 for the Test," Mukherjee said.

A fine display by the spinners put Saurashtra in a commanding position, as they enforced the follow-on on Rajasthan in their Ranji Trophy Group B match, at the Saurashtra Cricket Association stadium, in Rajkot.

After declaring their first innings at the overnight total of 475 for seven, Saurashtra bundled out the visitors for a paltry 136 in just 43.1 overs in their first essay on the penultimate day of the four-day match.

At close of play on Tuesday, Rajasthan were struggling at 147 for four in their second innings, still needing 192 runs with six wickets remaining.

The spin trio of Dharmendra Jadeja, Vishal Joshi and Kamlesh Makwana ran through Rajasthan's first innings before tightening their grip over the match by third day's end.

Saurashtra’s spinners made good use of the turning track and tormented the Rajasthan batsmen, who could never settle down.

It was debutant seamer Abhishek Bhatt, who provided the breakthrough when he trapped S Chauhan (0) in front of the wicket. The three spinners then got into action and took wickets at regular intervals.

Robin Bist (29) and Ashok Menaria (26) put some resistance in the first innings, but both were sent back in quick succession by Makwana, cutting short any hope of a fightback.

Yashpal Singh’s unbeaten fifty lifted Services to 245 for five in their first innings, in reply to Tamil Nadu's 456 for seven declared, at the end of third and penultimate day's play in the Ranji Trophy Group B match in Delhi.

His resolute knock of 87, which came off 168 balls and was studded with 15 hits to the fence, kept Services in the hunt going into the final day’s play on Wednesday.

At stumps on Day 3, Services trail Tamil Nadu by 211 runs with five wickets in hand.

Resuming at the overnight score 17 for no loss, Services lost opener Pratik Desai for 19.

Chatterjee and Gupta added 62 runs for the second wicket before off-spinner Malolan Rangarajan (2-46) accounted for two quick wickets to reduce Services to 98 for three in 43.2 overs.

While Gupta was stumped by Dinesh Karthik off Rangarajan, new man in Vishnu Tiwari fell LBW to the off-spinner in his next over.

Chatterjee and Yashpal steadied the ship, adding 61 runs for the fourth wicket before the skipper was dismissed three runs short of his half century.

Next in, Rajat Paliwal (5) too departed without contributing much. It was then left to Yashpal and wicketkeeper Sarabjit Singh (13 not out) to dig Services out of trouble and the duo managed to keep the hosts in the fray with an unbeaten 54-run sixth-wicket partnership. 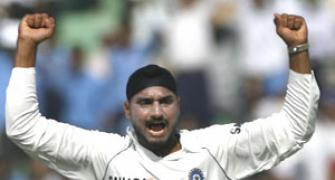 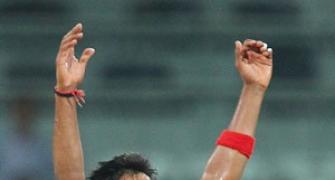 South Zone put one foot in semis of Duleep Trophy 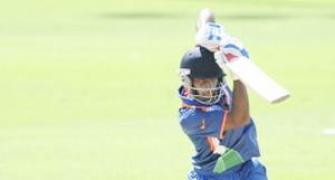 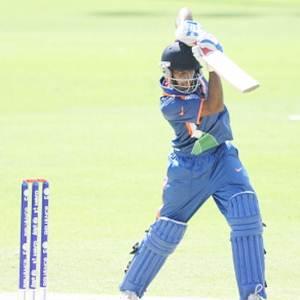