A round-up of the Ranji matches played on Friday

Bengal managed to save the match but Mumbai walked away with three points due to the first innings lead on the fourth and final day of their Ranji Trophy Group A encounter in Nagpur on Friday. Overnight 433/8, Bengal could add just four runs to the total and were bowled out for 437 with Dhawal Kulkarni grabbing a five-wicket haul.

It was nonetheless an admirable comeback from Bengal, who had been bowled out for 99 in the first innings.

Although the first innings lead was conceded by them but the team can still draw confidence from the second innings performance in which skipper Manoj Tiwary (169) and Sudip Chatterjee (130) played big knocks.

In pursuit of the target, Mumbai were off to a disastrous start and lost their top-three batsmen with just 22 runs on the scoreboard.

However, the middle-order rescued the team with Shubham Ranjane's 193-ball 76 being the standout effort. He struck 11 hits to the fence during the course of his innings.

Abhishek Nayar was another notable performer with a 51-run knock, which was laced with eight fours.

Ashok Dinda starred with the ball for Bengal, snaring four wickets in his 27 overs, which cost 74 runs.

After a complete wash out of the third day's play on Thursday, the match resumed their morning following half hour loss due to wet ground conditions.

But the skies opened up once again just before the lunch break, forcing the umpires to finally call off the match at 2.45pm.

A total of 19 overs play was possible today during which Vidharba scored runs 37 for the loss of three wickets in their second innings.

Delhi had earlier declared their first innings at 250 for 8 in 81 overs yesterday in reply to Vidharba first innings total of 183 all out in 52.3 overs.

While Delhi got three points, Vidharba took away one point from the drawn encounter.

Starting the final day on 168 for five, Karnataka were effectively 9 for five at resumption of play.

They could add only 48 runs to their total as they were all out for 216 in 92.4 overs -- only 16 runs better than their first innings effort.

Save opener Kaunian Abbas (74) and Manish Pandey (58), none of the others could make a mark.

Saurashtra were reeling at 36 for six before Arpit Vasavada (8) and Prerak Mankad (14) added 22 runs to win it for Saurashtra.

Bowlers clinch big win for UP against Railways

Resuming the day at the 35 for five while chasing 377 runs for an outright win, the defeat was inevitable for Railways and it was just a matter of time for the UP bowling attack to drew curtains on the game.

UP bowlers took 61.5 overs on the fourth and final day to bundle out Railways for 155 as their last five wickets contributed 120 runs.

Avinash Yadav top-scored for Railways with 43 runs, while skipper Karn Sharma made 35.

By virtue of the win, UP took home six points from the counter while Railways returned empty-handed.

Jiwanjot strikes a ton, leads Punjab to draw against Gujarat

Resuming the final day trailing by 341 runs, Jiwanjot (101) and Manan Vohra (47) added 49 runs for the second wicket before the latter was removed by Jasprit Bumrah.

Jiwanjot, though, found fantastic support from Uday Kaul, who scored a fighting 64 as the duo raised an unbeaten 165-run partnership.

Gujarat needed wickets to push for an outright win but Jiwanjot and Kaul dashed their hopes with their resilient batting even as Gujarat got three points courtesy first innings lead.

Jiwanjot faced 261 balls and hit 15 boundaries in his knock while Kaul took 178 balls with the help of seven boundaries.

Vizianagaram: Jharkhand dished out a disciplined all-round performance to notch up a five-wicket win over Assam on the fourth and final day of their Group B Ranji Trophy match on Friday.

Jharkhand thus grabbed six points from their fourth win out of seven games to jump to the top of the group B table with a total of 32 points, while Assam languished at the bottom after their fifth loss.

Rahul Shukla (3/74) and Ashish Kumar (2/49) produced a sensational spell of seam bowling to pick up the remaining five wickets as Assam ended their second innings at 299 after resuming at an overnight score of 269-5 in 98.2 overs.

With Assam adding just 30 runs to their overnight score, Jharkhand were left with a victory target of 110 runs at Dr PVG Raju ACA Sports Complex.

Opener Anand Singh (30) and I R Jaggi (34) then emerged as the top-scorers as Jharkhand piled up the runs in 20.2 overs, losing half of their side.

Earlier, Arun Karthik (4) was the first to be dismissed after he was caught and bowled by Shukla in the 100th over. Overnight batsman Sibsankar Roy (86) was the next to go when he was caught by Kaushal Singh off Shukla's bowling in his next over.

Mumbai: Services turned the tables on Chattisgarh after conceding the first innings lead with their bowlers leading the way to provide for an exciting 18-run win in their Ranji Trophy Group C game at the BKC ground.

Having set their rivals a challenging task of scoring 285 for an outright win by declaring their second innings on Thursday at 340 for seven, Services bowlers rose up to the task and bundled out Chattisgarh for 266.

Medium pacer Diwesh Pathania led the way with a haul of 4 for 67 while left-arm slow bowler Vikas Yadav complemented him nicely with figures of 3 for 65.

Openers Sunny Gupta made 87 in 243 balls with 12 fours and held one end up after putting on 80 for the first wicket with captain Abhimanyu Chauhan, who scored a brisk 52 off 61 balls.

Pathani dismised Chauhan to end the partnership and give the much-needed opening into the rest of the batting line-up that collapsed without too much of a fight.

Avinash Singh Dhaliwal made 34 at no. 6 but the others capitulated to hand Services with a come-from-behind win.

Services gained six points to boost their points tally to 15 with a game in hand while Chattisgarh remained at the bottom with 11 points from 8 games. 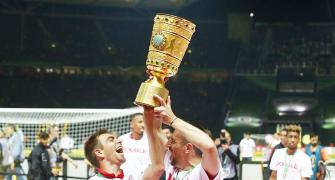 India's campaign in Macau ends as Saina, Sai crash out