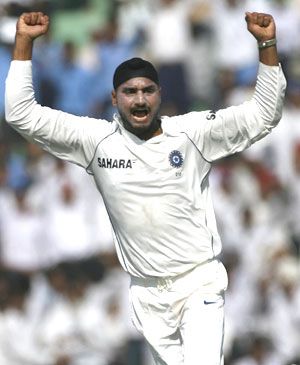 Eager to make a comeback to the Indian Test team, Punjab skipper Harbhajan Singh claimed a sensational six-wicket haul to skittle out Odisha for 205 in their first innings on the opening day of a Group A Ranji Trophy match in Mohali, on Sunday.

Harbhajan produced a brilliant display of spin bowling to return with figures of six wickets for 54 runs in 28.2 overs at the Punjab Cricket Association stadium.

Harbhajan's six-wicket haul will hold him in good stead when the selectors meet to pick the squad for the two-match Test series against the West Indies to be played next month.

Jiwanjot Singh (6) and R Inder Singh (5) were at the crease as Punjab reached 11 for no loss at the draw of stumps on Day 1.

Earlier, Punjab made most of winning the toss and electing to bowl as they ripped through the Odisha batting line-up. Harbhajan enjoyed good support by pacers Sandeep Sharma (2/49) and Siddarth Kaul (1/38).

Kaul struck first when he dismissed opener Natraj Behera in the 15th over to reduce Odisha to 47 for one. Sandeep then piled up more agony on the visitors when he ran out N Behera in the 31st over with the scoreboard reading 66 for two.

Harbhajan then weaved his magic as he got rid of the opener Rout before the experienced off-spinner then struck in the 58th over, dismissing Samantray, who was caught behind by Uday Kaul.

He continued making life difficult for the visitors who looked down the barrel when Podder too was sent back to the pavilion by Harbhajan in the 70th over.

Abhilash Mallick tried to held on to one side with a hard-fought 110-ball 32 but Odisha could not put the brakes on the slide and were dismissed in 83.2 overs in the end.

An unbeaten hundred by Baba Aparajith and a half-century from veteran S Badrinath guided Tamil Nadu to a strong position as they made 220 for three against Services on the opening day of their Ranji Trophy Group B match.

Aparajith was unbeaten on 109 along with Dinesh Karthik (11) when the stumps were drawn at the Palam ground in New Delhi after Tamil Nadu opted to bat first.

Pacer Suraj Yadav removed opener Abhinav Mukund (0) without troubling the scorers, getting him caught behind the wicket. Yadav, 26, then castled India batsman Murali Vijay (14) to peg the Southern side at 16 for two.

Veteran Badrinath then joined hands with Aparajith to take his side to safety with a century partnership as Services bowlers failed to breach the defences of the two.

Badrinath was dismissed in the final session of the day when he was bowled by medium pacer Shadab Nazar at 184.

Gujarat in command against Vidarbha

Riding on brilliant bowling by Rush Kalaria (5/32) and Jasprit Bumrah (4/30), Gujarat bundled out Vidarbha for a paltry 85 and then themselves reached a comfortable 153 for three at stumps on day one of a Ranji Trophy Group A match in Vidarbha.

Electing to field, Gujarat medium pacers wreaked havoc as they made most of the favourable conditions on offer.

As they fell like a pack of cards, only three Vidarbha batsmen -- opener Faiz Fazal (31), Ranjit Paradkar (17 not out) and Umesh Yadav (16) -- could reach the double digit
mark.

Gujarat bowlers never let the host batsmen settle down, reducing them to 21 for four in just 13.4 overs. There were only two brief partnerships -- 25 runs for the fifth wicket
between Fazal and Rashmi Parida and another 29-run stand for the ninth wicket between Paradkar and Yadav.

In reply, Gujarat got off to a fine start with openers Smit Patel (73) and Samit Gohel (36) sharing an 88-run stand for the first wicket to lay a solid platform.

Manpreet Juneja failed to impress and was dismissed for nine but Gujarat took control as they took a lead of 68 runs lead with seven wickets remaining at stumps.

At stumps, Parthiv Patel was unbeaten on 31 and Mehul Patel was yet to open his account.

Pujara fails but Saurashtra on top on Day 1

An unbeaten century from Sagar Jogiyani enabled Saurashtra reach 226 for two at the end of the first day's play of their Ranji Trophy Group B match against Rajasthan in Rajkot.

At stumps, Jogiyani was not out on 114 and giving him company at the other end was Jaydev Shah on 16.

Electing to bat, Saurashtra openers -- Jogiyani and veteran Sitanshu Kotak -- gave the hosts an ideal start by putting on a solid 136-run stand for the opening wicket.

Kotak, who was dismissed for 65 off 185 balls with the help of six fours, completed 8,000 first class runs and became the first player from Saurashtra to reach the milestone.

No. 3 Cheteshwar Pujara, who has cemented his place in the national Test squad, however could not do much with the bat as he scored just 21 runs while facing 60 balls, studded with two boundaries.

He, however, added valuable 72 runs with Jogiyani for the second wicket.

Opener Satyam Choudhary hit an unbeaten century to help Madhya Pradesh reach 282 for three in their first innings against Railways on the opening day of the Group B Ranji Trophy match in Indore.

Choudhary scored 19 boundaries in his 281-ball knock at the Holkar Cricket Stadium.

Mohnish Mishra cracked 97 in his 146-ball innings, which was studded with 14 fours and three sixes.

Earlier, Choudhary and Jalaj Saxena (33) added 52 runs for the opening wicket after Railways won the toss and elected to field.

Saxena was the first to lose his wicket when he was caught behind off Rathod. 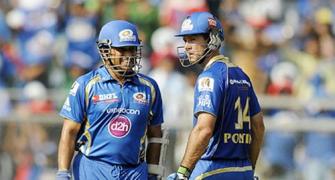 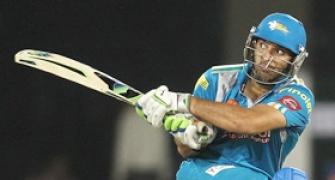 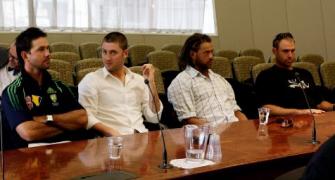 CA let me and the team down during 'Monkeygate': Ponting 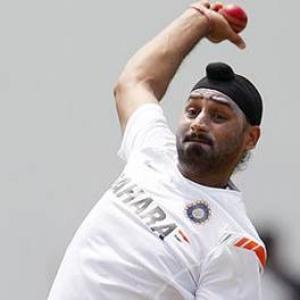