Lokesh Rahul extended his good run of form with an unbeaten 150 as Karnataka took the first day’s honours in their Group 'A' Ranji Trophy match against Uttar Pradesh at the M Chinnaswamy stadium, in Bangalore, on Thursday. 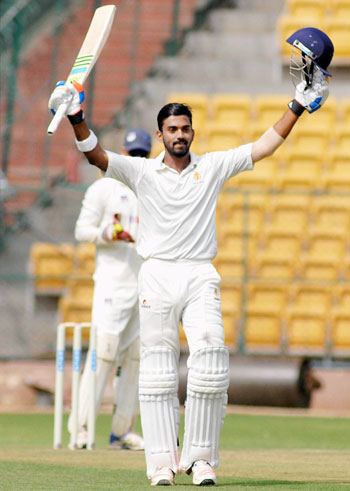 At stumps, the hosts were well-placed on 326 for the loss of four wickets.

Shreyas Gopal was unbeaten on 88, having added 178 runs for the fifth wicket with Rahul.

Uttar Pradesh won the toss and elected to field, hoping to utilise the early morning's helpful conditions, but that was not to be, as Karnataka rode on Rahul's 256-ball knock and his 80-run partnership with Robin Uthappa (41).

There was a mini collapse after Uthappa's dismissal, as the hosts lost Manish Pandey and Karun Nair to Praveen Kumar in quick succession.

However, thereafter, Rahul and Gopal frustrated the visitors with composed batting.

Rahul, who scored a century in only his second Test for India against Australia at Brisbane earlier this month, struck 22 boundaries and a six, while Gopal's knock was studded with 15 hits to the fence.

The experienced Praveen Kumar was Uttar Pradesh’s most successful bowler, the skipper returning figures of 3 for 34.

Ali Murtaza got the other wicket to fall.

Railways shoot out Bengal for 268 on Day 1

Half-centuries from Manoj Tiwary, Shreevats Goswami and Abhimanyu Easwaran helped Bengal to a modest 268, even as Railways seized the momentum at the fag end of Day 1 in the Ranji Trophy Group A match at the Eden Gardens in Kolkata.

But all the good work was undone when Tiwary was deceived by a change in pace by Anureet. Bengal's most dependable batsman mistimed his drive and was caught at cover by Ashish Yadav, who took a brilliant low catch, diving forward.

Tiwary's fall triggered yet another collapse as Railways quickly took the new ball and wrapped the issue within 12 balls for the addition of just 13 runs as Bengal were bowled out in 94.3 overs.

The pitch had some uneven bounce and the odd one stayed low. It will be interesting to see how the under-fire Bengal bowlers exploit the conditions against a team whose highest total this season is 280 (against Madhya Pradesh).

Earlier, Yadav gave the breakthrough when the left-arm spinner had Arindam Das (13) caught but youngster Abhimanyu

once again showed a fine mettle notching his fourth first-class century, all this season and that includes a careerbest 150.

New skipper Aditya Tare scored an unbeaten 67 and opener Shrideep Mangela 55 as Mumbai ended the Day 1 of their match against Baroda at Vadodara on 218 for 6.

Electing to bat in the Group A contest, Mumbai were off to a decent start, openers Mangela and Akhil Herwadkar (22) raising a 57-run stand.

Left-arm spinner Swapnil Singh provided the hosts the breakthrough when he castled Herwadkar.

Shreyas Iyer (25) joined Mangela and the two took the team to 97 before pacer Munaf Patel dismissed Iyer, bringing skipper Tare to the crease.

Soon Patel got rid of Mangela too and after that Mumbai struggled to build substantial partnerships.

Mangela's 55 came off 150 balls, with the help of eight boundaries.

Tare has faced 148 balls so far and hit eight fours.

At the end of the day, giving Tare company was Shardul Thakur (0).

Y Venugopal Rao smashed an aggressive century but got little support from his team-mates as Gujarat scored 277 for 7 on the opening day of their Ranji match against Maharashtra at the Sardar Vallabhbhai Patel Stadium in Valsad.

Electing to bat, Gujarat were reduced to 78 for two in the morning session before Venugopal (104), who came to the crease next, anchored the home side’s innings. He was the last man out on the day, hitting 13 fours and a six in his 165-ball knock. His fifth-wicket partnership of 82 with Manpreet Juneja (29) propped the Gujarat innings.

Captain Parthiv Patel, who opened the innings, was the other notable scorer with 41.

At draw of stumps, Rush Kalaria and Mehul Patel were unbeaten on 24 and 6 respectively.

For Maharashtra, Anupam Sanklecha took three wickets while Samad Fallah chipped in with two. Akshay Darekar and Chirag Khurana bagged a wicket each.

Arup Das bags four as Assam bundle out Andhra for 137

Assam skittled out Andhra for a paltry 137, with Arup Das snaring four wickets in their Group C match at the Barsapara Cricket Stadium in Guwahati.

When stumps were drawn on Day 1 that saw only 73 overs bowled, out of 90, Assam were 32 for one in their first innings.

Arun Karthik was batting on 11 while Sibsankar Roy was yet to open his account.

Earlier, after the hosts opted to bowl, Das vindicated the decision by taking removing the top half of Andhra’s batting line-up. He had figures of 4/24 while off-spinner Swarupam Purkayastha took three wickets for 35 runs.

Andhra skipper Mohammad Kaif was the top-scorer for the visitors with a knock of 60 off 146 balls. The former India player hit eight boundaries and a six.

Assam trail by 105 runs with nine wickets remaining in the first innings.

Sanju Samson’s unbeaten century, his first of the season, helped Kerala to a solid 273 for 4 on the opening day of their Ranji match against Services in Kannur.

Two quick wickets by Suraj Yadav in the middle session had left Kerala in a bit of a bother at 158 for 4, but Samson (143 batting) and Rohan Prem (42 batting) saw the day through with an unbroken stand of 115 for the fifth wicket after Services put the home side in after winning the toss.

At stumps, at the Conor Vayal Stadium at Tellicherry, Samson was batting on 143 off 191, having scored exactly 100 of his runs in boundaries. He has hit 19 fours and four sixes in his rollicking innings so far.

Rohan consumed 103 balls, hitting one four and six in his unbeaten 42.

For Services, Yadav took two wickets for 55 runs while Deepak Punia and Saurabh Kumar bagged one each.

Madhya Pradesh produced solid batting to put up 271 for 4 against Jammu and Kashmir on the opening day of their Group A match in Indore.

Opener Jalaj Saxena (89), Naman Ojha (85) and skipper Devendra Bundela (62 not out) struck half centuries after Madhya Pradesh won the toss and elected to bat.

While Saxena's 89, which came off 177 balls, was studded with 14 boundaries, Ojha needed 208 deliveries to score his runs during which he hit four fours and two sixes.

Saxena and Ojha shared 126 runs between them for the third wicket to stabilise Madhya Pradesh’s innings after the loss of two quick wickets.

At stumps, Bundela was batting alongside Harpreet Singh (13 not out).

Saurabh Tiwary piles on the runs for Jharkhand

Saurabh Tiwary hit a century and shared an unbeaten 159-run stand with Shiv Gautam to help Jharkhand post 229 for 2 against Goa on Day 1 of their Ranji Trophy Group C match at Porvorim , Goa.

At stumps, Gautam and Tiwary were unbeaten on 72 and 100 respectively.

Amogh Desai drew first blood for Goa when he had Virat Singh (8) caught by Darshan Misal.

Thereafter, Gautam and Tiwary got their act together and took the score to 94 for two at lunch.

Goa, who lost to Assam by 10 wickets, were again at the receiving end after the break as the two hit the home bowlers all around the ground.

Tiwary completed his century with a six. His 168-ball ton came with the help of nine fours and three sixes.

Ganesh Satish scored his second century of the Ranji Trophy season to guide Vidarbha to 274 for six against Delhi on Day 1 of their Group B match in Nagpur.

The hosts were struggling at 47 for three before Satish shepherded them to recovery with an unbeaten 119 off 252 balls.

Manan and Shivam Sharma took two wickets each for Delhi on a day when 94 overs were bowled.

Delhi are sitting pretty at the top of the group with 31 points while Vidarbha, on 17 points, need to work a lot harder to make the quarter-finals.

Shalabh Shrivastava (50) gave Satish good support as they shared a crucial 122-run stand for the fourth wicket. Both got together at a tough time after captain Subramaniam Badrinath perished without scoring.

While Shrivastava departed after his half century, Sumit Ruikar (33) hung around with Satish to move the innings forward.

Basant Mohanty and Deepak Behera produced devastating pace to bundle out hosts Punjab for a paltry 167 and give Odisha the upper hand on the opening day of a Group B match in Mohali.

Mohanty (4/43) and Behera (4/47) shared eight wickets between them to demolish Punjab on their home ground.  Alok Mangaraj (2/50) chipped in with two wickets.

Barring opener Jiwanjot Singh (24) and Taruwar Kohli (14), no other Punjab top-order batsman could manage double digit scores in the face of Mohanty and Behera's fiery bowling.

If not for a rearguard 112-ball 94-run last-wicket partnership between Manpreet Gony and Sandeep Sharma, Punjab could have been dismissed under the 100-run mark.

At one stage Punjab were 73 for the loss of nine wickets, but Gony and Sharma saved the hosts from humiliation as they took the attack to the opposition.

Sharma (35) was the last wicket to fall as Gony remained unbeaten on 51 off 52 balls, striking six boundaries.

Girja Rout was batting on 24, while Paresh Patel (27) was the lone Odisha batsman to depart, bowled by Sharma (1/16).

Image: Karnataka's KL Rahul raises his bat after scoring his hundred against Uttar Pradesh during Ranji Trophy match in Bengaluru. 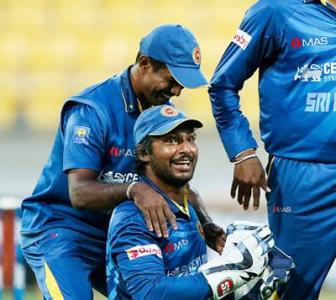 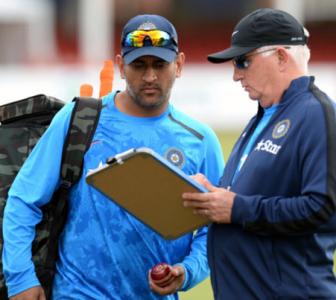 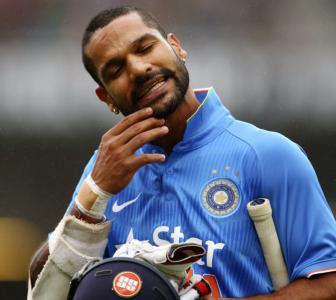 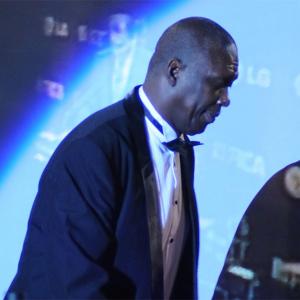 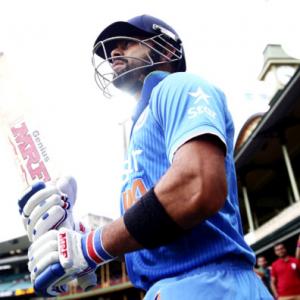