Ranji Trophy: Mumbai on course for victory over Punjab

Mumbai grabbed a handsome 204-run first innings lead over Punjab and then put the visitors under pressure by reducing them to 203 for four on Day 3 of their four-day concluding Elite Group A Ranji Trophy match at the Wankhede Stadium, Mumbai, on Friday.

Resuming at their overnight 308 for 5 in reply to Punjab's paltry first innings score of 226, Mumbai were all out for 430 after batting for 110 minutes, on Friday and then pressed on for a victory.

Punjab, 56 for 2, were rallied by a century stand between captain Uday Kaul (63 not out) and their leading scorer of the season Mayank Siddhana (57), but it was broken in the last half hour to close when the latter departed.

Mumbai grabbed another wicket by dismissing Amitoz Singh cheaply and at stumps Kaul, who has batted for 218 minutes and faced 176 balls, had new batsman Bipul Sharma (1) for company.

Though the wicket held no devils for the batsmen, Mumbai would be fancying their chances, on Saturday, for an outright win and five points to go with it, having dismissed the main batsmen barring the left-handed Kaul.

Kshemal Waingankar bagged 2 for 55 in three spells, including the wicket of Amitoz Singh after he was brought on late for a new spell by Mumbai skipper Wasim Jaffer, while the other wickets were shared equally by first innings hero and debutant Balwinder Singh Sandhu (Jr) and Ramesh Powar.

Off spinner Powar gave the crucial breakthrough before close when he induced Siddhana to drive and had him caught at short mid wicket after a vigil of 202 minutes. The batsman struck seven fours and a six in 120 balls.

Karnataka in command against UP

Despite conceding a 105-run first innings lead, Karnataka managed to bounce back in their second innings to virtually deprive Uttar Pradesh an outright win.

Resuming at their overnight total of 276 for six, Uttar Pradesh, riding on Mohammed Kaif's 152 and a gutsy 67 by Amir Khan, made 419 in their first innings at the JNNRC grounds.

Kaif and Khan knit together 108 runs for the eighth wicket to put UP in the driver's seat.

Off spinner Sunil Raju (3 for 43) and N C Aiyappa (3 for 92) shared the bowling spoils for Karnataka.

In their second essay, Karnataka lost Bharat Chipli (4), who opened in place of an injured Robin Uthappa, early.

In effect, Karnataka who have already qualified for the quarter-finals, are 53 runs ahead with eight wickets in hand.

Ravindra Jadeja snared three out of the remaining four Railways wickets as Saurashtra won their final group league match by a comfortable 97-run margin at the Karnail Singh Stadium.

The proceedings were wrapped up within 70 minutes into the first session on third day as Railways were all out for 149 in 51.1 overs, chasing 247.

Jadeja, who took four for 42 in the second essay, finished with his career-best figures of 10 for 65 to show for his efforts.

Saurashtra, thus finished their group league engagements with 16 points but are still not sure of making it to the knock-out stage as Rajasthan's outright victory over Orissa would also put the defending champions on 16 points and they might just sneak in on quotient.

UP also can't be ruled out of the equation as a win against Karnataka (practically tough) can ensure a ticket to the next round for Suresh Raina and Co.

On the day, M Suresh (30) played a cut shot off seamer Sandip Maniar, which Shitanshu Kotak stationed at gully pouched after fumbling a bit. Then Jadeja removed Ashish Yadav (50, 92b, 8x4) with a delivery that kept low and the batsman was caught on the backfoot.

A 106-run first innings lead and all-important three points against Baroda ensured that Bengal would stay among the Ranji Trophy Elites for one more season.

However at stumps, Baroda were tottering at 103 for five in their second innings, after Bengal finished at 390 for nine in their first innings.

Having reached the magic figure of 11 points needed to beat the drop, the visitors are now eyeing to go for the kill which is going for a 10-wicket win and ensure six points needed to make it to the knock-out stage. But at the same time, they would need a favourable result from the other match in the group being played between Haryana and Gujarat.

With Rakesh Solanki (55 batting) and Irfan Pathan (4 batting) at the crease, the job is far from over for Bengal bowlers as their fragile opening pair of Arindam Das and debutant Jayojit Basu might not be able to chase anything above 40.

Ashok Dinda (3/43) bowled with lot of fire as Baroda batsmen found his pace too hot to handle.

Already assured of a place in the knockout stage, Tamil Nadu gained a 197-run first innings lead over Madhya Pradesh in their penultimate preliminary league match.

Replying to hosts' first innings total of 486, Madhya Pradesh were all out for 289 in 101.2 overs and at close Tamil Nadu were 30 for the loss of two wickets in their second innings.

Madhya Pradesh opener Zafar Ali was instrumental in resurrecting his team's innings today and made a worthwhile contribution of 98 runs. Taking to the crease on Friday, with a tottering overnight total of 3 for 50, Zafar Ali was running out of partners as wickets fell at regular intervals at the other end.

However, before edging to wicket keeper Dinesh Karthik of Jaganathan Kaushik's last delivery of 92nd over, Zafar had stitched two useful stands of 46 runs for the fourth with Jalal Saxena (43) and then 73 runs for the sixth wicket with Ramiz Khan (37).

In reply, Tamil Nadu lost the wicket of inform opener Abhinav Mukund for eight in the fourth over and his partner Murali Vijay retired hurt at five.

Deadly bowling by seamer Rituraj Singh (6/75) helped defending champions Rajasthan beat Orissa by an innings and 56 runs in an Elite group A match in Jaipur, to almost seal a berth in the knock-out stage of the Ranji Trophy.

Both Rajasthan and Saurashtra finished their group league engagements with 16 points but Hrishikesh Kanitkar and co. pipped Saurashtra by a better run quotient.

Rajasthan's quotient of 0.984 is shade better as compared to Saurashtra's 0.925.

On the day, Orissa, who are already relegated to plate division, came up with an poor batting display as they lost 14 wickets to succumb to a humiliating defeat with a day to spare at the Sawai Man Singh Stadium.

Resuming at an overnight total of 76 for six, Orissa were forced to follow-on after being bundled out for a partly 134 in reply to Rajasthan's first innings total of 423.

Following on, Orissa folded for 233 in their second essay to go down miserably. 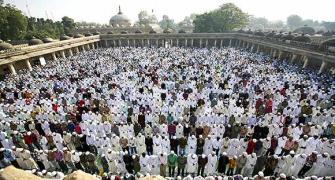 Mumbai have Orissa reeling after Yadav's 200