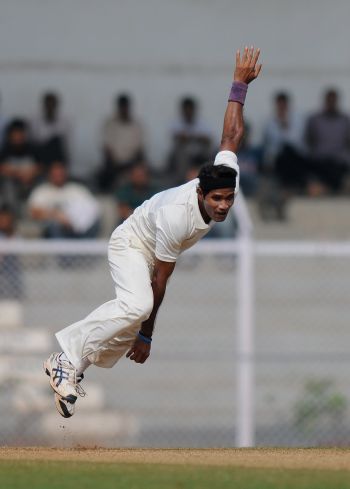 Bengal's most potent match winner Ashok Dinda rose to the occasion when it mattered the most as his five-wicket burst ensured a 43-run win against Railways in a Ranji Trophy Group A league encounter in Dharamsala on Sunday.

Bengal are now firmly on course for a knockout berth with 15 points in their kitty with two outright wins and three points by virtue of first innings lead in a drawn match.

It was a tricky final day as Mahesh Rawat (34) and skipper Karn Sharma (54 not out) came out to bat. The score was 186 for five and the second new ball was just an over old.

Using the conditions and his ability to hit the deck hard to perfection, Dinda employed a fuller length which did the trick.

First to go was Rawat who got a delivery that caught him plumb in-front. Once the 54-run stand came to an end, the floodgates opened as Dinda demolished the lower half in an unchanged 6.2 over spell.

While Karn chanced his arm at the other end, there was no support for him. Amit Mishra (5) edged an away going delivery to skipper Manoj Tiwary in the slips. Dipak Bansal (1) nicked one to Wriddhiman Saha.

Anureet Singh (10) and Karan Thakur (1) were then cleaned up as it turned out to be a perfect match for Bengal pace trio led by Dinda. Youngsters Amit Kuila and Sayan Ghosh got five wickets apiece as the three pacers bagged all 20 wickets in the match.

Krishnappa Gowtham destroyed Assam's second innings with a brilliant stint of off-spin bowling before Karnataka romped home to a comprehensive 10-wicket victory on the fourth and final day of their Ranji Trophy Group B game in Mumbai on Sunday.

Gowtham grabbed 7 for 108 while leg-spinner Shreyas Gopal captured the other three wickets for 97 as the spin duo bundled out Assam for 264 in their second innings at the Bandra Kurla Complex ground.

Karnataka, who led Assam by 245 runs in the first innings, needed 20 runs for an outright victory and accumulated the required runs for no loss in just three overs to secure a thumping victory with a bonus point to boot.

The seven points that Karnataka gathered here helped them leapfrog Jharkhand to the top of the league table with 17 points.

This was also the southern outfit's second successive outright victory after their innings win over Delhi at the Eden Gardens, Kolkata in their previous game.

Assam had their backs to the wall when they commenced in the morning at 48 for one and so it proved.

Barring first innings centurion Amit Verma, himself a former player from Karnataka, who made an aggressive 74 with the help of four sixes and seven fours in 120 balls, and opener Rahul Hazarika (44), the others put up meek resistance against Gowtham and Shreyas.

The 28-year-old Gowtham – playing in only his sixth game in four years - claimed six of the top seven batsmen, including Verma, to finish with his career's as well as season's second five wicket haul in an innings that took his tally of victims this season to 18 in three games.

Gowtham had taken 5 for 35 in the second innings against Delhi, his maiden five wicket haul.

Opener Rahul Hazarika was the second best scorer with 44, while lower down the order Sarupam Purkayastha made 33 to add to his first innings half century, but overall Assam put up a poor batting show against the spin duo barring left hander Verma.

Young opener Shubham Rohilla struck a maiden century but could not prevent Andhra from defeating Group C leaders Haryana by 77 runs in their Ranji Trophy league game at the Wankhede Stadium in Mumbai on Sunday.

Required to score 371 for an outright victory after having conceded a 150-run first innings lead to Andhra, Haryana were all out for 293, a vast improvement on their first innings score of 103, but still not good enough to carry them across the finish line.

Andhra secured five points that boosted their tally to 13 from four while Haryana remained on 15 from the same number of games. Punjab secured three points, as against Baroda's one, on the basis of taking the first-innings lead at the Feroz Shah Kotla on the fourth and final day of the high-scoring game.

Owing to the out-of-favour India all-rounder Yuvraj's 260, his second century of the season, and opener Manan Vohra's 224, Punjab piled up a mammoth 670 before being bowled out.

Even as the match headed for a draw, Baroda batted a second time and scored 37 for no loss in 14 overs before it was called off.

Odisha finished at 274 for eight in their second innings as Delhi failed to garner bonus points after their Group B Ranji Trophy cricket match ended in a tame draw in Mohali.

Delhi pocketed three points from the drawn affair by virtue of their first innings lead, while Odisha had to be contend with just a point.

Jharkhand grabbed three points, owing to the first innings lead after their Group B Ranji Trophy match against Vidarbha ended in a draw at the Krishnagiri Stadium.