Hubli: Robin Uthappa's 16th first-class century helped Karnataka take a big first-innings lead of 263 to take the home side to a strong position on second day of their Ranji Trophy Group A match against Jammu and Kashmir.

Uthappa (156), who failed to make the cut for India's World Cup squad, stitched a 177-run partnership for the fifth-wicket with Chidhambaram Gautam (80) as Karnataka declared at 423 for nine in reply to Jammu and Kashmir's 160 all out at KSCA Hubli Cricket Ground. 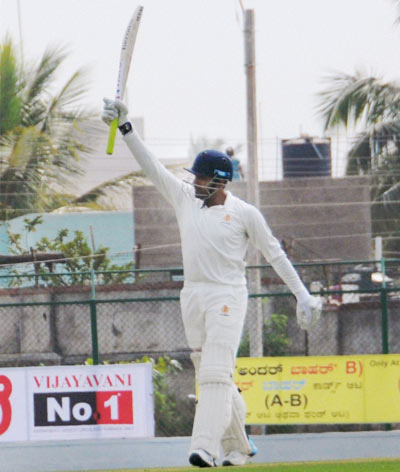 The visitors reached 37 for the loss of opener Obaid Haroon (9), who was caught behind while poking at a length ball in the corridor from Abhimanyu Mithun.

The other opener Adil Reshi and Aditya Singh were batting on 23 and four respectively at the draw of stumps.

Uthappa's 156 had come on a tricky pitch with seam movement and inconsistent bounce. He hit 23 boundaries and a six in his 202-ball innings.

J&K did not do themselves any favours on the field, and twice dropped Uthappa in the slips -- Paras Sharma put him down when he was on 63 and Ian Dev Singh when he was on 135.

By the time the second drop happened, Uthappa was already in the middle of another big lower-order partnership, this time with Shreyas Gopal (58 not out).

The seventh-wicket pair added 88 in 114 balls before Mohammed Mudhasir finally broke through to bowl Uthappa.

Rawat takes 5 as MP fight back against Mumbai

Mumbai: Young medium pacer Yogesh Singh Rawat returned a sensational five-wicket haul to trigger a batting collapse as Madhya Pradesh shot out Mumbai for 404, allowing the hosts to add just 29 runs to their overnight total on the second day of their Ranji Trophy match at the Wankhede stadium.

It was a maiden five-wicket haul for Rawat, who made his first class debut in MP's previous game at Gwalior against Baroda in which he was wicketless.

Rawat claimed five for 14 in an eight-over spell for one run with the second new ball after Mumbai resumed the day on 375 for four.

MP replied strongly as they reached 221 for three before stumps, riding on opener Jalaj Saxena's excellent knock of 85 in 111 balls with 16 fours, while wicketkeeper Naman Ojha hit 60 from 142 balls.

At close, Ojha - who has struck 7 fours and a six - was accompanied by captain Devendra Bundela (42) as the two remained unconquered after putting on 91 runs for the fourth wicket.

It was Rawat's brilliant spell, supported by Puneet Datey's tight spell of bowling from the other end that saw Mumbai fold like a pack of cards.

The 22-year-old Rawat packed off three batsmen in his fourth over of the morning. He dismissed overnight unbeaten batsman Sarfraz Khan through a catch in the slip cordon.

He then trapped the other overnight unbeaten batsman Siddesh Lad (73) off the fifth ball and added the scalp of Shardul Thakur in the last ball to be on a hat-trick.

Rawat added the scalps of Wilkin Mota and last man Kshemal Waingankar to end up with 5 for 74 in 24 overs.

Spearhead Datey accounted for the other wicket - Iqbal Abdullah - to end up with 3 for 76 as Mumbai lost six wickets in a heap while adding only 29 runs.

Lucknow: Hosts Uttar Pradesh were 103 for one in reply to Baroda's huge 498 all out at stumps on the second day of the four-day Group A Ranji Trophy match.

Opener Tanmay Srivastava was unbeaten on 69 off 130 balls, while giving him company was Mukul Dagar on 17 as UP made a strong start in their first innings.

Akash Verma (12) was the lone UP wicket to fall, caught by Deepak Hooda off Yusuf Pathan's (1/23) bowling.

Earlier, resuming on the overnight score of 316 for six, Baroda rode on Irfan Pathan's 150-ball 98 and and Swapnil Singh's unbeaten 73 to reach close to the 500-run mark.

Irfan and Swapnil shared 139 runs for the eighth wicket to help Baroda pile up the big score.

But once Irfan departed two runs short of a century, Baroda innings fell apart as Swapnil ran out of partners, but nonetheless, the duo did enough to challenge the hosts' batting line-up.

Prasanna aggravated his back injury after completing fifty when he collided with Bengal pacer Ashok Dinda while running from the non-striking end. He had to be stretchered off the field.

He could not take the field again and Tamil Nadu's innings folded for 246 for nine in 88.4 overs. The skipper said he is unlikely to take any further part in the match.

In reply, Bengal were 183/2, trailing Tamil Nadu by 63 runs with Manoj Tiwary playing the sheet anchor role with an unbeaten on a fluent 54 from 61 balls, while youngster Abhimanyu Easwaran was batting on 41.

The collision happened in the last ball of 84th over when Dinda tried to cross the pitch to collect the ball at the mid-on region and collided with Prasanna who was responding to Mohammed's call for a single.

After managing to complete the run Prasanna lay on the pitch and was soon stretchered off the field before being rushed to the hospital.

"It seems I've aggravated my back injury. It looks doubtful for me to play again in the second innings," Prasanna said after the match limping to the team bus with the help of his team mates.

Nothing went right for Tamil Nadu as they would lament dropping a regulation catch of Tiwary at second slip by K Bharath Shankar.

Barring the blip, the Bengal batsman was all elegance and looked untroubled in his 81-run partnership with Easwaran.

Bengal started out with a positive manner with openers Arindam Das and Rohan Banerjee putting on the foundation with a 74-run partnership.

Debutant left-arm quick T Natarjan got his maiden first class scalp by dismissing Banerjee who got a thick edge to second slip to be out for 27 from 83 balls.

Veteran seamer Laxmipathy Balaji claimed the scalp of Das to deny him a half-century by two runs before the tea break.

But Tiwary looked unperturbed and played strokes all around the wicket cruising to his 18th first class half-century in 59 balls as the visitors looked to be running out of ideas.

Jaipur: Puneet Yadav (90) missed out on a hundred for Rajasthan but the hosts were firmly in the driver's seat after reducing Punjab to 140 for five on the second day of their Ranji Trophy Group B match.

Gurkeerat Maan (70 not out) was rock solid from one end but the visitors are still 393 runs behind. Pankaj Singh caused the most damage, as he claimed three wickets for 56 runs.

Earlier, Rajasthan piled up a mammoth 433 in the first innings after resuming Day 2 on 295 for four. Pranay Sharma, who was unbeaten on 118 could not continue for long and departed after scoring 140 runs off 318 balls, hitting 19 boundaries and one six.

But, Yadav carried on and hit a 155-ball 90 run knock that helped Rajasthan cross the 400-un mark.

For Punjab, leg-spinner Sarabjit Ladda was the most successful bowler claiming four for 104 while Sandeep Sharma took three for 106.

Chasing a big total, Punjab were soon in trouble as Deepak Chahar, Pankaj Singh and Aniket Choudhary struck in quick succession to reduce the visitors to 40 for 3 at tea.

Saurashtra in trouble against Maharashtra

Rajkot: Maharashtra batsman Ankit Bawane scored a century before his bowlers picked up three wickets quickly to leave Saurashtra struggling at 94 for three on the second day of Ranji Trophy Group B match.

In-form Sheldon Jackson was batting on 57 and giving him company was Vishal Joshi (9) at the end of Day 2 at the SCA Stadium in Khandheri.

Resuming on their overnight of 320 for six, Bawane stroked 124 to lift Maharashtra to 519 in their first innings. Bawane faced 224 balls with eleven fours and a six in his fine knock.

Khurana frustrated home team bowlers even after losing Bawane, scoring 69. He was the last man to be dismissed as Maharashtra piled up 519 off 150.5 overs.

For Saurashtra, Kamlesh Makwana was the most successful bowler, taking five for 120, while Dharmendra Jadeja finished with 2 for 189.

Saurashtra openers Bhushan Chauhan (4) and Sagar Jogiyani (4) were sent back by Mundhe and Samad Fallah respectively.

Lahli: Delhi dished out a fine bowling performance to bundle out Haryana for 188 and take the crucial first innings lead on the second day of the four-day Group B Ranji Trophy cricket match at the CH Bansi Lal Cricket Stadium in Lahli on Tuesday.

After piling up a modest 278 all out in their first innings, the onus was completely on the Delhi bowlers to keep Haryana in check and the likes of Sumit Narwal (3/43), Varun Sood (3/20) and Navdeep Saini (2/33) did a remarkable job to bowl out in 66.2 overs and give the visitors the crucial 90-run lead.

For Haryana, Himanshu Rana top-scored with a 135-ball 80. He struck eight boundaries.

At stumps, Delhi were seven for no loss in their second essay with Unmukt Chand batting on 6 and skipper Gautam Gambhir on 1.

Earlier, resuming their first innings at the overnight score of 278 for seven, Delhi managed to add just 20 runs before being bowled out.

Centurion Virender Sehwag failed to add to his overnight score of 147 as he edged a Mohit Sharma delivery to Nitin Saini behind the stumps.

Once Sehwag departed, it was just a formality for Haryana to wrap up the Delhi innings.

Mohit Sharma was the pick of the bowlers for Haryana with figures of four for 46 runs, while veteran Joginder Sharma scalped three wickets giving away 39 runs.