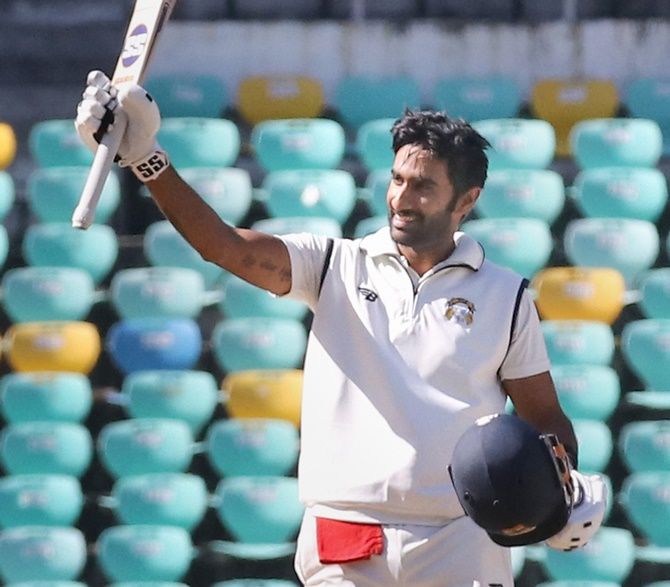 IMAGE: Punjab batsman Gurkeerat Mann lifts his bat as he celebrates after completing his century against Vidarbha. Photograph:PTI

Uttar Pradesh thrashed Saurashtra by an innings and 72 runs, even as Test specialist Cheteshwar Pujara failed miserably with the bat in the second innings of the Elite Group B match of the Ranji Trophy held in Rajkot, on Saturday.

Uttar Pradesh had bowled out Saurashtra for 331 in their first essay and then posted a mammoth 523 on the board, courtesy a 165 by middle-order batsman Mohammed Saif.

When play resumed on the fourth and the final day, at the SCA Stadium in Khanderi, Saurashtra needed to bat their skins out to save the game and evade defeat.

However, Uttar Pradesh skipper Saurabh Kumar spun his web around the opposition batsmen and led the side to an emphatic victory.

Kumar, a slow left-arm orthodox bowler, returned with match-winning figures of 6-55, as his team shot out Saurashtra for 120 and gained even the bonus point.

Saurashtra openers Harvik Desai (50) and Snell Patel (19) gave them a sedate start conjuring 38 runs for the first wicket before leggie Zeeshan Ansari (3-42) trapped Patel in front of the wicket.

One-down Pujara, who has on so many occasions pulled his team out of the woods, was expected to do it one more time.

However, the Test specialist lasted just 10 deliveries and was trapped in front of the wicket by Kumar for 3.

The Kumar-Ansari duo then ran through Saurashtra's middle-order removing Samarth Vyas (0), Jay Chauhan (1) and Prerak Mankad (4) in quick succession, as the hosts slipped to 57-5.

Sheldon Jackson (11) also was unable to covert his start, as Saurashtra lost their sixth wicket for 83.

For the hosts, opener Desai was the only hope if they had to bat another two sessions, but leggie Ansari caught him on his own bowling even before lunch was called.

At lunch, Saurashtra were reeling at 98-8, as Uttar Pradesh were on cusp of a memorable win.

It was then just a matter of time, as Uttar Pradesh removed the last two batsmen D A Jadeja (13) and Jaydev Unadkat (2) to collect seven points.

The win was even more special as Uttar Pradesh defeated Saurashtra in their own backyard.

In the other two matches, Himachal Pradesh took the first innings lead and secured three points, whereas Karnataka had to be content with one point.

In the game at Indore, Madhya Pradesh took the first innings lead against Tamil Nadu and collected three points.

Bengal settles for 3 points as Gnaneshwar stands tall for Andhra

Bengal had to be satisfied with three points by virtue of their first innings lead over Andhra in their Ranji Trophy group A fixture, in Kolkata, on Saturday.

Both the teams agreed for a draw in the post-lunch session after Bengal reached 46 for no loss in 21 overs. The hosts rued missing out on securing an outright win after the match saw several interruptions because of bad light and rain in the first three days.

"We played fabulous cricket but we lost more than 100 overs which is about one and half days. It's very difficult to win at this level with two and half days," Bengal coach and mentor Arun Lal said.

Opener CR Gnaneshwar became the saviour for Andhra as he remained unbeaten on 74, batting through the third and fourth days before the visitor's innings folded for 181 after Ishan Porel dismissed Y Prithvi Raj (four) in the 70th over, at the stroke of lunch.

In the previous over, Gnaneshwar was hit on his helmet by a rising delivery from Bengal debutant pacer Akash Deep, forcing the play to be held up for about 10 minutes. Gnaneshwar, however, resumed batting soon and remained unbeaten. His 239-ball patient knock saved Andhra team from follow-on.

But it was Gnaneshwar who stood tall as Bengal attack missed their pace spearhead Ashok Dinda, who was axed for the match because of misconduct.

In his absence, rising Bengal pacer Porel returned with impressive figures of 4/50, while Akash Deep also made a fine debut with 3/36.

Delhi miss bonus points vs Hyderabad; no Ishant, Shikhar in next game

Delhi predictably got six points but lost three wickets in their pursuit of a meagre 84-run target, failing to log home a bonus point in their third group A Ranji Trophy league encounter against Hyderabad in New Delhi.

Delhi now have seven points from three games and are currently placed 12th in the combined points list of the 18 teams in group A and B. Hyderabad are second last with three defeats in as many games.

However, Delhi's problems will compound after Saturday's match as they will miss the services of Shikhar Dhawam, Navdeep Saini and Ishant Sharma when they next face Punjab in an away game. Punjab are currently on top of the elite table with 17 points from two wins with bonus points.

While Dhawan and Saini will not be playing the next game due to international commitments, Ishant will be available in the third game as a part of workload management programme. Another pacer Pawan Suyal has a muscle tear in his groin and could be out of Ranji Trophy for good.

Worse, one of the replacement seamer Kuldeep Yadav was set to make his debut and now finds himself embroiled in a controversy after allegedly behaving inappropriately with a female hotel staff on Christmas day in Kolkata.

DDCA are now in a spot to prepare a good team with not enough ready replacements.

The match showed lack of ability in adverse conditions with next best score after Dhawan's 140 is Anuj Rawat's 29.

Starting the day at 24 for no loss, Delhi crawled to the target in 27.5 overs but only after losing opener Dhawan (21), his partner Kunal Chendela (6) and Nitish Rana (6).

Once Chandela edged one to Kola Sumanth behind the stumps off Mohammed Siraj, Delhi's chances of getting seven points from the game evaporated.

Regular skipper Dhruv Shorey (32 not out) played for himself in his pursuit to get some form back with a lot of time at disposal in the company of Jonty Sidhu.

The pace bowling duo of Basant Mohanty and Suryakant Pradhan shared eight wickets between them as Odisha trounced Uttarakhand by 10 wickets at home to complete a hat-trick of wins in the Ranji Trophy in Cuttack.

This was Odisha's third bonus-point win in a row as they lead group C by with 21 points in their kitty, five points clear of second placed Jharkhand.

A superlative 110 by man-of-the-match Shantanu Mishra helped Odisha secure a tall 117-run first innings lead as Uttarakhand, resuming the final day on 54 for four in their second essay, folded for 195 in 52.1 overs at the DRIEMS Ground.

Suryakant Pradhan grabbed 5/63, while the experienced Mohanty, who had struck 6/17 in the first innings, claimed 3/76 en route to a match-haul of nine wickets to lead Uttarakhand's collapse.

Chasing a paltry 60, Odisha were steered home by Shantanu Mishra (29 not out) and Govinda Poddar (26 not out) after opener Debasish Samantray retired hurt on seven. 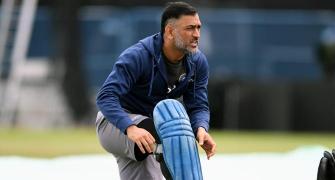 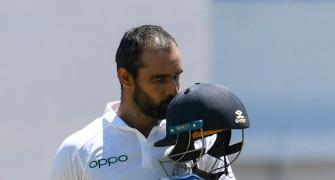 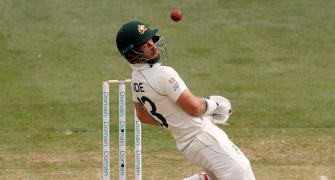 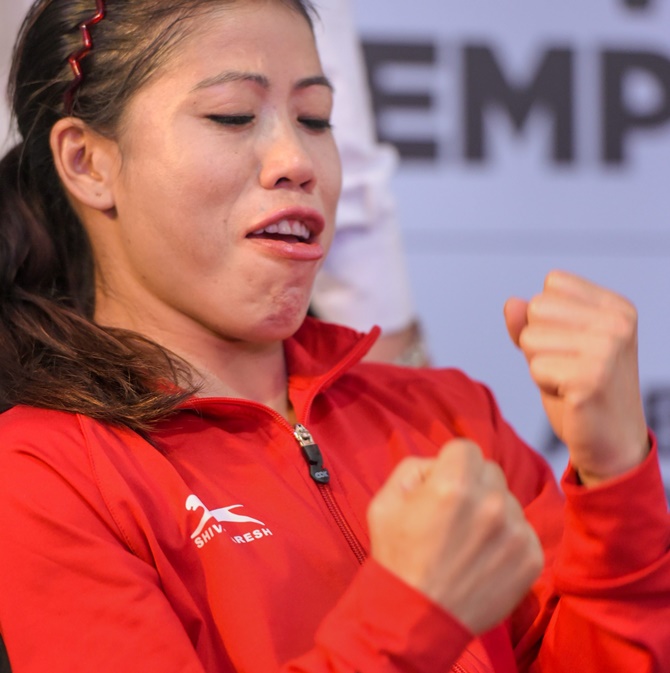