A round-up of the Ranji Trophy quarter-final matches played on Saturday.

Karnataka stay on top of Mumbai 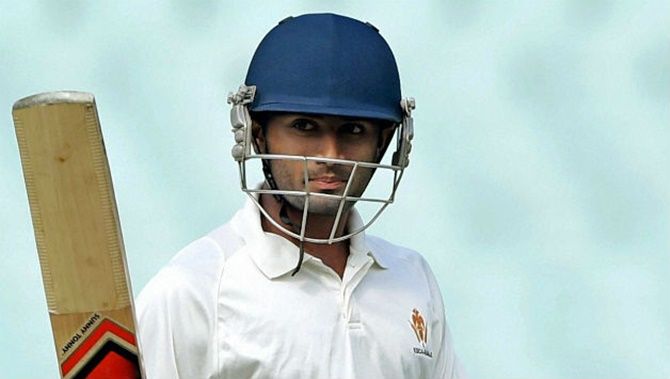 Shreyas Gopal compiled his fourth hundred in first class cricket, an unbeaten 150, as Karnataka piled on a massive first innings total of 570 to take a huge 397-run lead against Mumbai in the Ranji Trophy quarter-final in Nagpur, on Saturday.

The 24-year-old Bengaluru-born leg-spin bowling all rounder faced 274 balls and struck 11 fours to become the lone centurion in the Karnataka first innings that saw four other batsmen cross the 50-run mark, including no. 11 Arvind Sreenath (51), without reaching three figures.

Facing an imposing task of neutralising the deficit and setting a challenging target for Karnataka, 41-time winners Mumbai floundered for the second time in the match to close day three of the five-day game at 120 for 3 in 44 overs with Suryakumar Yadav making a fighting, unconquered 55 in 115 balls. Giving Yadav company at close was Akash Parkar (3).

Mumbai, trailing Karnataka by 277 runs with seven wickets in hand, face a Herculean task to set a challenging fourth innings score for eight-time champions to chase over the last two days of the game at the VCA Stadium in Jamtha.

The day began with Karnataka already sitting pretty at 395 for 6 with skipper Vinay Kumar on 31 and Shreyas Gopal on 80.

Debutant Shivam Malhotra sent back Kumar quickly this morning, but Mumbai were frustrated by next batsman Krishnappa Gowtham (38) who put on 73 runs for the eighth wicket with Shreyas and later last man Arvind who used the long handle to good effect.

Shreyas and Arvind, joining hands with the score at 478, did not get separated till they added 92 runs against the insipid Mumbai attack before Malhotra ended the stand as well as the innings with the scalp of the No 11 batsman who clouted 1 six and 9 fours in his 41-ball knock.

For Mumbai, Shivam Dube did not add any wicket to his five-wicket haul of on Friday, Malhotra finished with three wickets while pacer Dhawal Kulkarni ended up with 2 for 105.

The Mumbai second innings was off to a rocky start with openers Prithvi Shaw (14) and Jay Bista (20) dismissed cheaply for the second time in the match.

From 34 for 2, Yadav and Akhil Herwadkar (26) revived the inning with a partnership worth 70 before the latter flicked a short ball from offie Gowtham to short mid-wicket fielder to depart just before stumps.

Abhimanyu Easwaran reaffirmed his status as a future India prospect with a defining unbeaten 93 as Bengal are on course of batting defending champions Gujarat out of the Ranji Trophy quarter-final in Jaipur.

Manoj Tiwary's side are already 307 runs ahead with nine wickets in hand.

Having scored 129 in the first essay, Easwaran once again performed when his team needed the most.

With national selector Sarandeep Singh in attendance, Easwaran is almost a certainty when India A team travels to England next year.

With more than two and half days left, Bengal needed to bat with a lot of caution and the Dehradun-based right-hander dropped anchore scoring 93 off 218 balls with 12 boundaries.

He has now literally batted Gujarat out of the contest as a target in the 400-run vicinity will be very difficult to chase.

More importantly, he got good support from Abhishek Raman (33, 118 balls) as they added 99 for the opening stand. More importantly frustrated the Gujarat bowlers for nearly 40 overs.

Earlier, Rujul Bhatt (32) and Piyush Chawla (43) added 75 runs for the seventh wicket before left-arm spinner Pradipta Pramanik (1/21) cleaned him up.

The seasoned Chawla then tried a hoick off Dinda to be caught by Amit as Gujarat lost their last four wickets within a space of five runs.

Medium pacer Rajneesh Gurbani took a five-wicket haul to bowl out Kerala for 176 before Vidarbha finished Day 3 on 77 for one, extending their overall lead to 147 runs in a Ranji Trophy quarter-final match in Surat.

At stumps, captain Faiz Fazal was unbeaten on 51, while Akshay Wakhare was on seven.

Resuming on 32 for 2, Kerala kept losing wickets at regular interval in reply to Vidarbha's first-innings total of 246 with Gurbani (5/38 in 14 overs) wreaking havoc.

Overnight batsman Jalaj Saxena top-scored with 40. He along with Rohan Prem (29) stretched their overnight stand to 47 before the latter got out.

Saxena then coupled with Sanju Samson (32) to put on 44 runs for the fourth wicket and take Kerala's score beyond 100. But Samson's dismissal triggered a collapse and Kerala went from 115 for 3 to be bundled out for a meagre 176 with Gurbani cutting through the middle and lower order.

Having taken a 70-run first innings lead, Vidarbha started their second innings on a positive note with Fazal and Sanjay Ramaswamy (14) adding a 53-run opening stand.

Thereafter Wakhare, the nightwatchman, hung around with his captain to ensure that Vidarbha did not lose any more wicket till the close of play.

Former India spinner Narendra Hirwani's son Mihir picked up a five-wicket haul but Delhi still nosed ahead of Madhya Pradesh after taking a crucial 67-run first-innings lead in their Ranji Trophy quarter-final in Vijaywada Mihir, who, like his father, also bowls leg spin, returned figures of five for 89 in 27.4 overs.

His effort, though, was not enough for MP to prevent Delhi from taking the first-innings lead.

In reply to Madhya Pradesh's 338 all out, Delhi's first innings ended at 405, after which they grabbed the wickets of Rajat Patidar and Ankit Dane to reduce MP to 47 for two at stumps on the third day.

Resuming at 180 for two, Delhi were helped by contributions from most of their top and middle-order batsmen at the Dr. Gokaraju Liala Gangaaraju ACA Cricket Ground.

While Kunal Chandela top-scored with 81 off 179 balls, Dhruv Shorey struck 78 while facing 120 deliveries with the help of 10 boundaries, and Himmat Singh made a crucial 71 to help Delhi take the vital first-innings lead.

Skipper Rishabh Pant had raced to 49 off 56 balls before being dismissed by Hirwani -- one of his five victims – while Nitish Rana chipped in with a 43-run knock.

Besides Hirwani five-for, Ishwar Pandey and Ankit Sharma had two wickets each.

Having taken the lead, Delhi made the opening breakthrough in Madhya Pradesh's second innings when medium pacer Vikas Tokas had Patidar caught and bowled in the fourth over.

MP were dealt another blow when Dane was run out just before the close of play. MP led Delhi by 20 runs with eight wickets remaining. 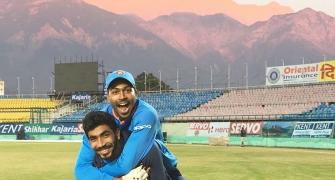 Why youngsters should get inspired from Bumrah's Test selection 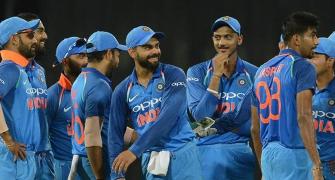 How India can reclaim No 1 spot in ODI rankings 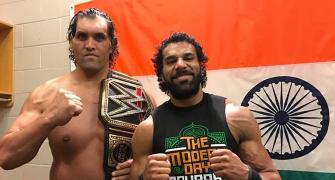 All you need to know about Kohli, Anushka wedding 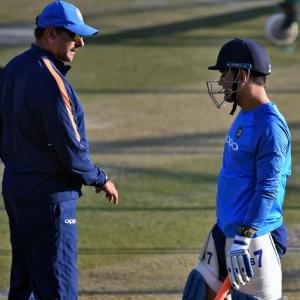