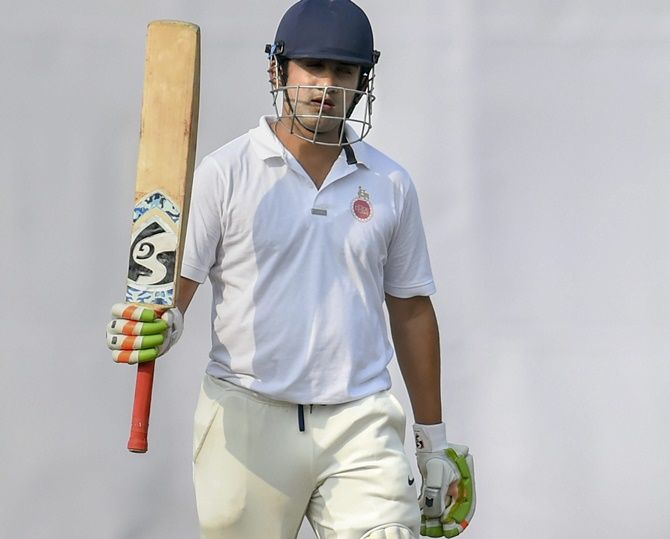 Gautam Gambhir lived a charmed life but the famous grit was displayed in abundance on way to an unbeaten 92, his final knock in competitive cricket guiding Delhi to 190 for one.

On the second day of the Ranji Trophy encounter against Andhra, Delhi were placed well in reply to the visitors' first-innings score of 390.

Everything else became a footnote once Gambhir entered the field.

It was a Feroz Shah Kotla hosting a Ranji match, for which a few hundred faithfuls from Old Delhi turned up.

The stage was set and there were little elements that the handful of people would remember in his last hurrah.

There was a customary security breach (synonymous with Kotla) with a fan trying to click a selfie before being hauled up, the Guard of Honour by teammates at every break and his wife turning up with two adorable daughters just after the husband completed a fifty.

There was the artist Saif splashing his canvas with colours to capture for posterity his final on-field exploits.

Gautam Gambhir had it all and even the Almighty wouldn't have wanted the fairytale script to go awry.

So no one complained when an Andhra fielder dropped a sitter at mid-off, a regulation catch which would have been otherwise gobbled "11 out of 10 times".

He was twice dropped in the slips but it didn't matter during the 152 balls that he played.

They wanted to see Gambhir bat like Gambhir. Ugly but effective with some pleasant drives sprinkled in between and scrappy at other times. 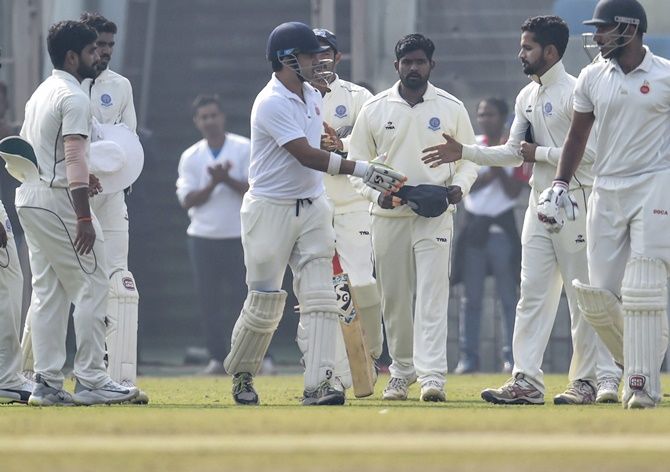 The tuck of the hips, the jabs and the dabs with quick rush and that occasional cover drive were all there to see.

Once into his 70s, he slowed down as the milestone approached.

The photographers got edgy, elder daughter Azeen and toddler Anaiza wanted to run into the ground, but Gambhir didn't want to ruin it.

He was ready to grind it one last time.

It's his last chance to lift his bat, open his helmet and acknowledge whoever will be present at the Kotla on Saturday.

He needs eight runs more and probably wouldn't mind if a few more cricket fans turn up for that probable moment.

Gambhir, and his fans, know he deserves that last hurrah.

Bowlers and stand-in skipper Siddesh Lad who scored an unbeaten 70 led Mumbai's fight-back against Maharashtra on day two of their Elite Group A Ranji Trophy match in Pune.

After bundling out Maharashtra for 352, Mumbai ended the second day at 196 for 5, still adrift by 156 runs, at the Maharashtra Cricket Association Stadium at Gahunje near Pune.

In the morning Maharashtra, who resumed at their overnight first innings score of 298 for 3, were bowled out for 352 with medium-pacer Akash Parkar (4-56) being the pick of Mumbai bowlers.

The fight-back for Mumbai was continued by crisis man Lad who walked in at number 3 after the early fall of opener Jay Bista (23).

Lad, who hit 9 fours and a six in his 151-ball knock, and experienced Aditya Tare (63), who opened the innings, compiled a crucial 109-run stand for the second wicket.
But Maharashtra hit back by taking three quick wickets.

Shubham Ranjane (9 not out) was holding fort with Lad as the two teams will fight it out for a first innings lead on Saturday.

Meanwhile, at Valsad,a close fight was on between Railways and Gujarat for first innings lead.

Railways are trailing by 101 runs with seven wickets in hand at stumps on day two.

At Vadodara, Yusuf Pathan proved his mettle and struck unbeaten 129 to help his side take the first innings lead against Chhattisgarh.

In Rajkot, hosts Saurashtra grabbed the first innings lead after bowling out Karnataka for 217.

Rajasthan skipper Mahipal Lomror hit a stroke-filed 133 as the hosts took the honours on the second day of their Elite Group C Ranji Trophy game against Assam.

Lomror's ton helped Rajasthan post 325 in their first essay in reply to Assam's 108 to take a handy lead of 217 runs.

Assam, in their second innings, were 109 for 3 at close of play, still adrift of their rivals by 108 runs.

Rajasthan resumed the day at overnight score of 153/2.

Lormor, unbeaten on 77, soon completed his maiden first-class hundred at the Sawai Mansingh Stadium in Jaipur.

For Rajasthan, Salman Khan, who walked in at number 7, too played a crucial 71-run knock in 139 balls as he frustrated the Assam bowlers.

For Assam, right-arm medium pacer Ranjit Mali (5-62) was the pick of bowlers.

Rajasthan, who have already won three games, are looking for their fourth outright victory.

Meanwhile, at Ranchi, Odisha managed to grab the first innings lead against Jharkhand with opener Anurag Sarangi top scoring with 58.

At Agartala, a close fight was on for the first innings lead between Tripura and Haryana with the former trailing by 57 runs with three wickets in hand.

Tamil Nadu gained the upperhand, reducing Kerala to 151 for 9 after making 268 in the first innings on the second day of the Ranji Trophy Elite Group 'B' match in Chennai.

The home team bowlers came to the fore, striking at regular intervals to leave Kerala 117 runs behind with one wicket standing.

Left-arm medium-pacer T Natarajan and left-arm spinner Rahil Shah with three wickets each did most of the damage while R Sai Kishore took two wickets.

Earlier, debutant M Shahrukh Khan (92 not out) missed out on a well-deserved ton as the hosts collapsed from 249 for 6 to 268 all out.

For Kerala, P Rahul was the only one to make a significant contribution with 59.

Late resistance from Sijimon Joseph (28 batting) meant that Tamil Nadu would have to wait till tomorrow to wrap up the innings.

Mohammed who added 69 runs with Shahrukh Khan fell to a catch by wicket-keeper Vishnu Vinod to give Warrier his fourth wicket. Warrier then sent back R Sai Kishore (5) to earn a five-wicket haul.

Thampi dismissed Rahil Shah (0) and T Natarajan (0) in the 98th over to end Tamil Nadu's innings.

In response, Kerala suffered an early blow when the consistent Jalaj Saxena was bowled by Natarajan for 4.

Tamil Nadu's fielders backed their bowlers and skipper B Indrajith took a brilliant catch at slip to send back Vishnu Vinod for a duck off Sai Kishore's bowling. 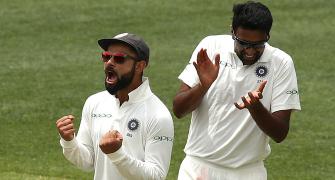 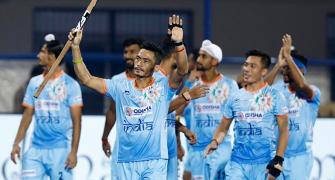 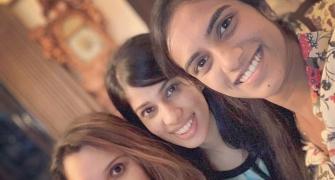 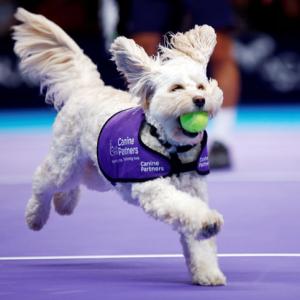 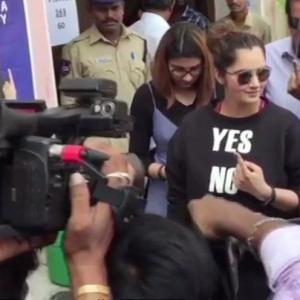