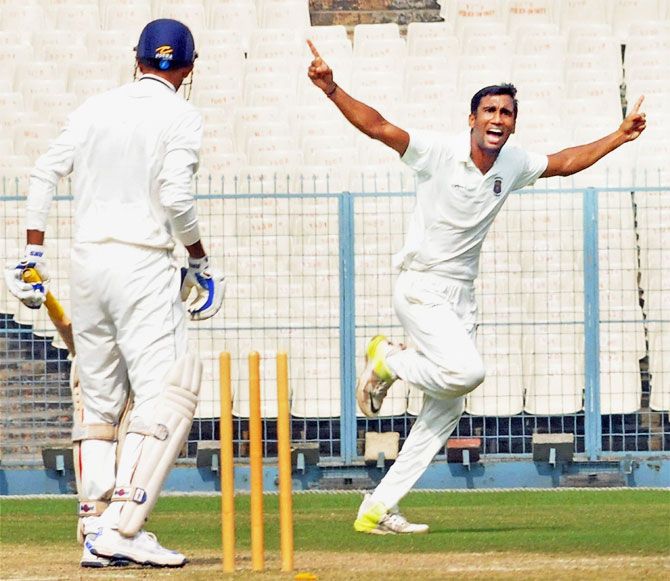 A brilliant 90 by inform Suryakumar Yadav and late flourish from Shardul Thakur helped Mumbai set Uttar Pradesh a target of 295 runs on day three of the Ranji Trophy match in Mysuru on Tuesday.

Yadav, who missed his century in the first innings, guided Mumbai to 286 all out, in an innings which was studded with ten boundaries and a six. Shardul made a useful 48 in 64 balls with seven boundaries and two sixes. The pair added a vital 57 run-stand for the eighth wicket.

At close of play, Uttar Pradesh were 43 for one in their second innings, trailing 252 runs with nine wickets in hand, with Shivam Chaudhary and Samarth Singh were on the crease with 28 and seven runs, respectively.

Tanmay Srivastava, who was looking to give solid foundation or a successful run chase, fell to opening bowler Shardul for six.

Resuming their score at 51 for two, Mumbai lost their overnight batsmen -- Akhil Herwadkar (19) and Shreyas Iyer (18) -- after adding 28 runs.

With a defeat almost staring at their face with the scoresheet reading 79 for four, inform Yadav and Abhishek Nayar (39) steadied the ship by putting up a useful 81 runs partnership for the fifth wicket, taking the total to 160 for four. Nayar scored 39 in 81 balls after smashing five boundaries and a six.

Yadav and Dinesh Lad brought back the team into reckoning by stitching a 62-run partnership for seventh wicket, taking the total to 222 for six, but Lad could not hold on and got out after scoring 35 off 56 balls with two boundaries and sixes each.

Next to get out was Yadav for ninety runs after he was caught by Umang Sharma of Saurabh Kumar.

After the departure of Yadav, Mumbai folded their innings after useful contributions coming from the bat of Shardul.

Mumbai: Services are on the brink of conceding the first innings lead to Hyderabad as they were 360 for 9 at stumps on the penultimate day of their Ranji Trophy encounter, trailing Hyderabad by 220 runs.

Despite a gritty ton by middle-order batsman Shamsher Yadav (104) and 90 by opener Nakul Verma, the other batsmen struggled to score at the MCA's Bandra-Kurla complex ground while responding to Hyderabad's first innings mammoth total of 580 for 9 declared.

Resuming at 77 for no loss, Hyderabad pacers struck early as Ravi Chuahan, who just added six runs to his overnight score, was cleaned up by Mohammad Siraj.

Soon after that, Aanshul Gupta, who retired hurt yesterday, was dismissed at 10 when he edged to the keeper off medium pacer Ravi Kiran with the scoreboard reading 2-86.

Kiran stuck for the second time when he trapped Azaruddin Bloch leg before the wicket for 10.

In the early hours, Verma got a 'life' when he was dropped by Hyderabad skipper S Badrinath on 34 at gully.

Verma, who had paced his innings well, missed a century after being trapped leg before the wicket by spinner Akash Bhandari after lunch.

Another left-handed batsman Rahul Singh played variety of shots including a pull, on drive and cover drive and ably supported Shamsher Yadav. He became Kiran's third scalp after edging to the keeper on 49 soon after tea.

Meanwhile, Yadav anchored the Services innings in his brave knock of 104 which comprised 13 boundaries and a six. He eventually was sent back to the pavilion by Bhandari and became the ninth man to be dismissed.

Vikas Hathwala (5), Vikas Yadav (6) also fell cheaply. Diwesh Pathania made a quick 15 off 32 balls but was caught by Bhandari off Mehdi Hasan.

After tea, Hyderabad pacers were rewarded for bowling a disciplined line and length and consistently in the right areas.

For Hyderabad, Kiran was the pick of the bowlers with three wickets while Siraj and Akash Bhandari scalped two wickets each.

At stumps, both no 10 and 11 batsman Raushan Raj and Raj Bahadar Pal were unbeaten on 0.

Hyderabad have a substantial chance to finish things off early Wednesday morning and take first innings lead to grab three points in the match which is otherwise headed for a draw.

Railways close in on outright win over Baroda

Nagpur: Riding on their bowlers all-round effort, Railways are all but set to secure a comprehensive outright win over Railways in a Group A match of the Ranji Trophy cricket tournament.

Slow left-arm orthodox bowler Avinash Yadav (3/50), pacers Anureet Singh (2/67) and Deepak Bansal (2/36) and Ashish Yadav (2/29) picked up wickets for Railways to bundle out Baroda for 239 in their second innings after they resumed at the overnight score of 27 for no loss.

Deepak Hooda (98) is the lone Baroda batsman to show some fight before he was caught LBW in front of the wicket by Avinash just two runs short of a well-deserved century.

Set a paltry target of 113 runs for an outright win, Railways made strong start, courtesy openers Saurabh Wakaskar (45) and Shivakant Shukla (36 not out).

Ashish Singh (8) failed to make any impact with the bat as Railways finished the third and penultimate day at 90 for two.

Win is just a formality for Railways as they have enough arsenal in their batting armoury to get the required 23 runs on the final day of the match.

Rajkot: Bengal bowlers were frustrated by No 10 Krishnamoorthy Vignesh and No 11 Thangarasu Natarajan as they added 38 runs for the unbroken final wicket stand to ensure three points for Tamil Nadu in a Ranji Trophy group A encounter.

Vignesh was joined by Natarajan when the score was 310 for 9 with Tamil Nadu needing another 28 runs to surpass Bengal's tally of 337.

Vignesh struck 30 off 38 balls with three fours and a six while Natarajan defended doggedly for his 10 runs as Tamil Nadu finished the day at 348 for 9.

At the start of the day, Abhinav Mukund (45) and Kaushik Gandhi (65) added 100 runs for the second wicket before Agniv Pan's direct throw found Mukund short of his ground.

Gandhi, who hot seven boundaries was gone when he edged one from Ojha with Shreevats Goswami snapping it up behind the stumps.

Dinesh Karthik top-scored for Tamil Nadu with a valuable 80 off 117 balls with 11 boundaries. He added 58 runs Baba Indrajith (34).

However both the Baba brothers were out in quick succession to Sayan Ghosh (4/121) who was getting the old ball to reverse.

While Ghosh was the most successful among Bengal bowlers, he was also wayward at times giving away easy runs to Tamil Nadu batsmen.

Bengal captain Manoj Tiwary did not use Pragyan Ojha (2/48 in 14 overs) much. Neither did he use off-spinner Aamir Gani, who went for 19 runs in his 7 overs that he bowled.

Vizianagaram (Andhra): It was double delight for young K L Rahul as the Karnataka player struck a fluent century in a Ranji Trophy game before earning a recall to the Indian cricket team for the second Test against England.

The fit-again opener was added to India's squad for the Test starting November 17 in Visakhapatnam.

He scored 106 off 131 balls, decorating his innings with 13 boundaries and four sixes against Rajasthan at the Dr PVG Raju ACA Sports Complex.

Owing to Rahul's knock and a 63 by Mayank Agarwal, Karnataka put themselves in the driver's seat in the Group B game, by setting Rajasthan an improbable target of 525.

At stumps on the third and penultimate day, Rajasthan, at 118/6, were on the verge of suffering a drubbing. They trailed by 407 runs with only four wickets remaining in their second innings.

Karnataka had scored 374 in their first innings, with Rahul (76) and Mayank (81) making the bulk of the runs, after opting to bat. They bowled out Rajasthan for 148 but chose to not enforce follow-on, declaring their second innings at 298/6 in 62.1 overs.

Seamer R Vinay Kumar, who returned figures of 4/28 in the first innings, has already taken three wickets on the third day, while S Aravind, who also had a four-wicket haul, picked up two wickets.

Gujarat, who made 302 in the first innings, bowled out MP for 252 before ending the day at 228 for two in the second innings, extending their lead to 278 runs.

Opener Samit Gohel (93*) and Parthiv Patel (80*) put Gujarat in a commanding position going into the final day, by sharing an unbeaten 143-run stand for the third wicket.

Earlier, Madhya Pradesh failed to get past Gujarat's first innings score after resuming the day at 162 for five.

Rush Kalaria made the maximum impact for Gujarat in the bowling department, taking four wickets for 49 runs.

Kerala lead by 210 runs against Goa

Mumbai: Kerala have taken a sizeable lead of 210 runs against Goa in a Ranji Trophy group C on Tuesday.

Having scored 342 in the first innings, Kerala restricted Goa to 286 in their first innings thereby taking a 56 run lead ensuring three points.

In the second innings, Kerala scored 154 for 4 with skipper Rohan Prem batting 60 following up on his 130 in the first innings.