A round-up of the opening day's actions of the Ranji Trophy matches being played in different parts of the country.

Not less than 48 hours after returning from the grueling tour to Australia, wicketkeeper Wriddhiman Saha slammed an unbeaten century to script Bengal's stunning comeback against Jammu and Kashmir on the opening day of a Group A match in Kolkata. Having just returned from Australia on late Sunday night, Saha was quick to adjust to his home condition as his unbeaten 129 off 202 balls (18x4s, 1x6) took Bengal to 312 for seven at stumps from a precarious 68 for four at one stage after opting to bat at the Eden Gardens.

While a relaxed Saha led Bengal's stunning comeback with his ninth first-class century, skipper Laxmi Ratan Shukla lent a fine support to the wicketkeeper with a defiant 72 from 123 balls (9x4s, 1x6) in a 144-run fifth wicket partnership.

In the morning, Jammu and Kashmir skipper Parvez Rasool (2-57) rattled the Bengal top-order with two wickets in successive deliveries when the off-spinner dismissed Arindam Das (30) and castled Sudip Chatterjee (0) with a doosra in his second over.

Later, Jammu and Kahsmir new ball bowler Ram Dayal (2-88) scalped the in-form duo of Abhimanyu Easwaran (21) and skipper Manoj Tiwary (9) as Bengal lost four wickets in 19 runs and looked in dire straits at 98 for four at the lunch break. Promoted to open the innings in place of Rohan Banerjee, last match centurion Abhimanyu gave a steady start with Das as they were 49 for no loss but the mini collapse left Bengal in tatters.

Opener Unmukt Chand struck his third century of the season as Delhi piled up 248 for five against Odisha on the opening day of a Group B match at the Feroz Shah Kotla.

Unmukt made 117 off 236 balls with the help of 12 boundaries and added 70 runs for the second wicket with Virender Sehwag (39) to hold Delhi together after the early loss of skipper Gautam Gambhir (13).

After the dismissal of Sehwag, Unmukt shared 122 runs with Mithun Manhas for the third wicket to take Delhi forward. At stumps, Manhas was batting on 55 (152 balls, 4x4s, 1x6) and giving him company was wicket-keeper Punit Bisht, who is yet to open his account.

Leg-spinner Shreyas Gopal denied Aditya Shrivastava (91) a hundred in a three-wicket haul as Karnataka reduced Madhya Pradesh to 270 for seven on the opening day of their Group A match in Indore.

The hosts were going good after early loss of opener Jalaj Saxena (0) as Shrivastava and Anand Bains (34) stitched together a 74-run stand for the second wicket after they elected to bat.

Gopal (3-48) dismissed Bains to break the partnership but Naman Ojha was a good replacement at the crease as the wicket-keeper batsman scored a 54-run knock, which had three fours and as many sixes.

With Shrivastava he brought up a 109-run stand, which was broken when Gopal sent back the MP opener. Ojha was also dismissed in the next over, bowled by off-spinner Udit Patel. Gopal struck again by trapping rival skipper Devendra Bundela (1). The hosts were now struggling at 186 for five.

However, Harpreet Singh, batting at number six, scored a quick-fire 53 with eight fours and a six to lend some respectability to his team's total. Seasoned paceman Abhimanyu Mithun removed him at the fag end of the day to expose Madhya Pradesh's tail. Amkit Sharama (11) and SS Jain (12) though ensured that the hosts do not lose any more wicket before the end of the play.

Gujarat on top against Punjab on opening day

A solid performance by the top half helped Gujarat reach 284 for four in their first innings on the opening day of their Group B match against Punjab in Ahmedabad.

Electing to bat after winning the toss, Gujarat recovered from the early loss of opener Smit Patel (14) to be placed comfortably when the stumps were drawn for the day. Priyank Kirit Panchal was the top-scorer today with a 144-ball 85, which included eight fours and a couple of sixes.

Panchal shared a 117-run stand with Bhargav Merai before both the batsmen departed in quick succession, dismissed by Vinay Choudhary. However, the loss did not affect the team too badly as Venugopal Rao and Rujul Bhatt shared a 99-run unbeaten stand. While Rao had gathered 75, Bhatt was steady on 34 when play ended for the day.

Tamil Nadu bowl out UP for 182

Tamil Nadu replied with 53 for the loss of two wickets after bowling out Uttar Pradesh for just 182 on the first day of their Group A match in Chennai.

The Uttar Pradesh first innings lasted 74.4 overs at the MA Chidambaram Stadium. At stumps, left-handed opening batsman Ahbinav Mukund
(26) and Baba Aprajith (1) were at the crease.

Earlier, electing to bat, Uttar Pradesh opening batsman Tanmay Srivastava offered a straightforward catch to medium pacer Vijay Shankar in the fourth over of the day. With the other opener Akash Varma (16) also back in the pavilion after being caught at short leg by Baba Indrajit off M Prabhu's bowling, the visitors were struggling at 36 for two, before slipping to 89 for five in the 40th over.

Middle-order batsmen Harish Alam (47) and Ekalavya (19) added 34 runs for the sixth wicket before the latter fell to off-spinner Rahil Shah.

Puneet Yadav stroked an unbeaten century to guide Rajsathan to 249/7 on the first day of their Group B match against Maharashtra in Pune.

Yadav was batting on 113 and giving him company was Deepak Chahar when stumps were drawn at the Maharashtra Cricket Association Stadium.

Even as the other struggled after being put into bat, the 27-year-old Yadav added 131 runs for the seventh wicket with Aristh Singhvi (43). During his valuable knock, Yadav found the fence 16 times and faced 182 balls, while Singhvi hit eight boundaries in his 120-ball knock.

Image: Bengal's Wriddhiman Saha celebrates his century against Jammu and Kashmir in Kolkata. 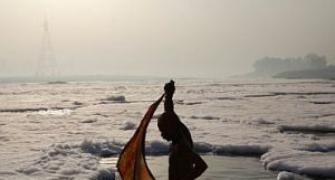 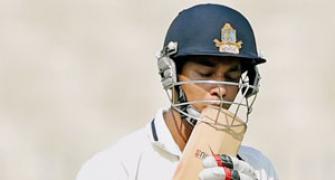 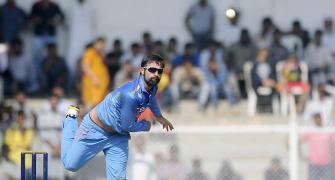 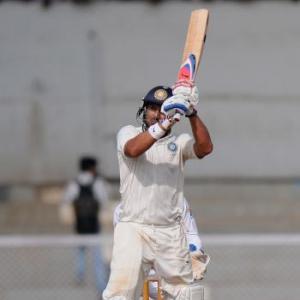