Haryana are 75 for 2 in their second essay and will be looking to avoid an innings defeat when they take the field on Tuesday, as they still trail Maharashtra by 208 runs, at the end of third day's play in the Ranji Trophy Group 'B' match in Pune.

Replying to Haryana's first innings total of 257, Maharashtra added 238 runs to their overnight score before declaring at 540 for 8, thereby ensuring three points on account of the first-innings lead of 283 runs.

But, with a full day to go and Haryana still needing 208 runs with eight wickets in hand to catch their opponent's score in the first essay, Maharashtra will undoubtedly be eyeing an innings defeat.

Sunny Singh (29) and Abhimanyu Khod (10) were at the crease when stumps were drawn.

Both the Haryana openers, Nitin Saini (22) and Rahul Dewan (8), fell for the addition of 32 runs in the second innings, at the Subrata Roy Sahara stadium.

Earlier, Sangram Dilp Atitkar (190) continued from where he on Sunday and added 72 runs to his overnight score before he was caught by Jayant Yadav off Ashish Hooda.

Atitkar struck 24 fours and a six in his 348-ball stay at the crease.

After the fall of Rohit Motwani (11) in the day's first over, Atitkar, in the company of Kedhar Jadhav (109), stitched a 188-run partnership for the fifth wicket to take the team close to 500-run mark.

Both resorted to some aggressive batting to swell Maharashtra's lead on a placid wicket.

Chirag Khurana (31 not out) made a useful contribution down the order to help the hosts tighten their grip on the match. 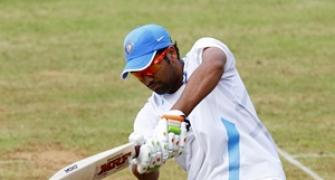 Haryana extend lead over Delhi to 250