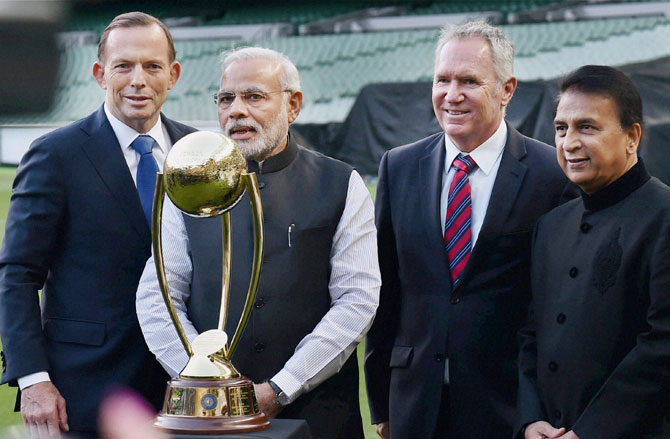 The Saurashtra Cricket Association (SCA) has invited Prime Minister Narendra Modi for the first-ever cricket Test match to be hosted by the ground in Rajkot.

The first Test of the five-match rubber between India and England will be played at the SCA stadium in Khandheri from November 9 to 13.

"The SCA is going to host it's first-ever Test match next month and it's indeed a matter of pride for all cricket lovers of this region," SCA's media manager Himanshu Shah told PTI on Wednesday.

"The SCA and its governing body have cordially invited Prime Minister Narendra Modi for the first Test match," added Shah.

"It has been SCA's profound honour that Modiji has laid the foundation stone of the stadium on June 19, 2006 when he was the Chief Minister of Gujarat. He has also inaugurated it on January 5, 2013," the official said.

"Now Modiji has become the Prime Minister and his presence will be an inspiring force for all of us at the SCA," he said, adding the state association was waiting for the confirmation from Prime Minister's office.

The SCA has also invited Gujarat Chief Minister Vijay Rupani and former players of the region, who represented the country at international level, for the match.