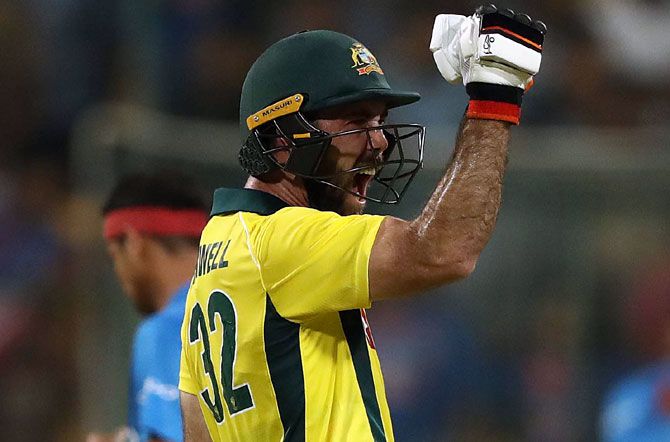 Maxwell went on a rampage as he smashed 113 not out from 55 balls, hitting as many as nine sixes on way to his third century in the shortest format. He took the game away from India, who should have defended 190 for four after Kohli and Mahendra Singh Dhoni shared a 100-run stand for the fourth wicket to take the hosts to a competitive total.

In the end, Australia cantered to a famous seven-wicket win with Maxwell fittingly finishing the game with a six and four.

Prior to the game, Australia had never beaten India in a T20 International series -- home or away. They had beaten India way back in 2008 at Melbourne but that was a one-off game.

The visitors kept themselves in the chase despite a wobbly start which saw them being reduced to 22 for two in four overs. 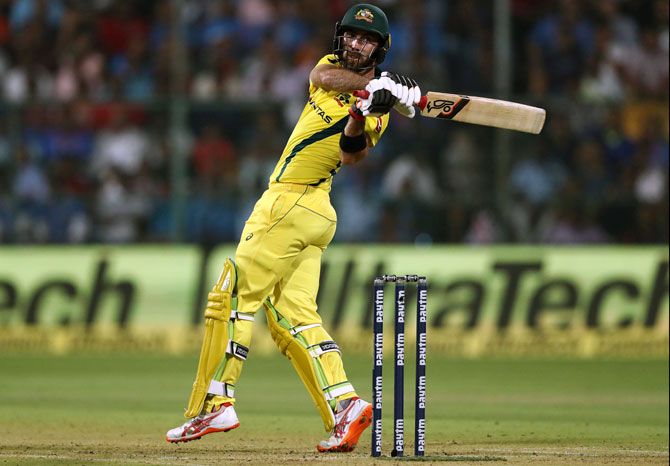 Opener D'Arcy Short and Maxwell shared a 73-run stand off 43 balls to Australia in the hunt in the middle overs before the former fell in the 12th over.

India had to defend with only five bowling options which required all-rounder Vijay Shankar to complete his quota of four overs.

Shankar, who did not bowl in his last three T20s, put up a decent effort, picking up wickets of Short and Finch. Short could not last long after being dropped on 36 by Rishabh Pant.

Australia stayed in the hunt in the middle orders with Maxwell plundering the Indian attack, hitting boundaries at regular intervals.

With 60 needed from five overs for victory with seven wickets in hand, Maxwell smashed Yuzvendra Chahal for two handsome sixes, including a spectacular switch hit, to tilt the game in Australia's favour. 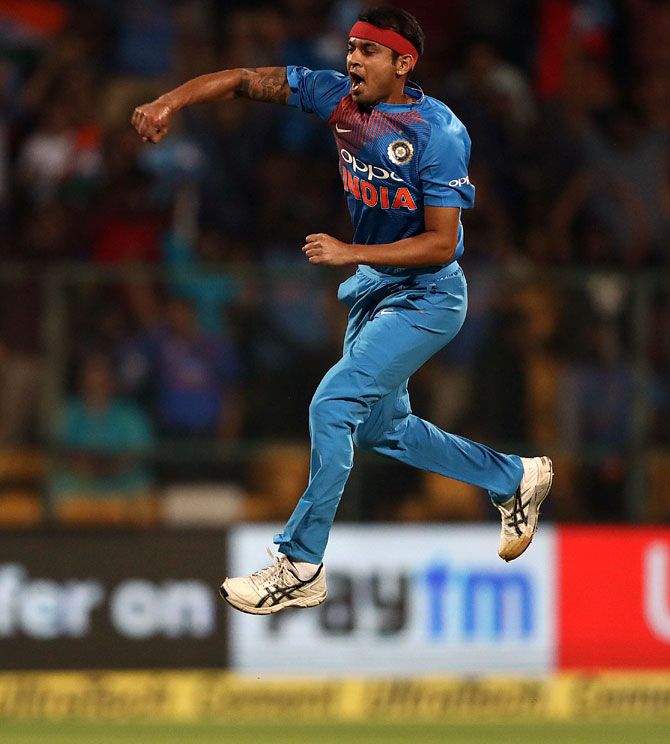 Peter Handscomb played the supporting role to perfection with 20 not out from 18 balls, as the duo were involved in an unbroken stand of 99 from 52 balls for the fourth wicket.

Earlier, Kohli and Dhoni delighted the Chinnaswamy crowd with a 100-run stand.

Kohli led from the front in a must-win tie, hammering an unbeaten 72 off 38 balls in a knock including half a dozen sixes while Dhoni played the supporting role well with 40 off 23 balls.

It was a typical Dhoni innings that comprised three fours and as many sixes and came after a rather slow 29 off 37 balls in Vizag in the first match on Sunday.

Opener K L Rahul was amongst the runs again, scoring 47 off 26 in front of his home crowd. 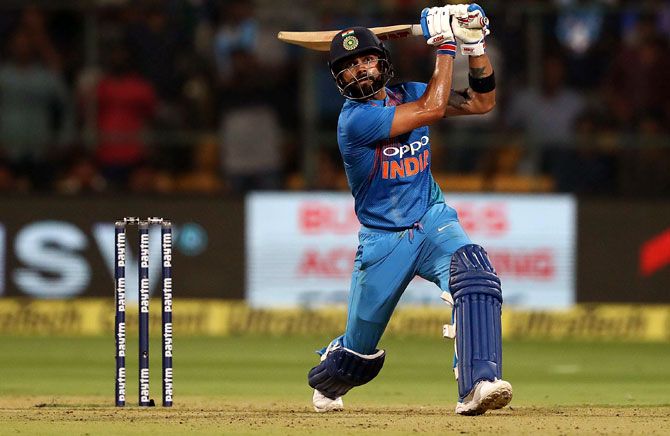 India made a third change by resting Rohit Sharma and bringing back Shikhar Dhawan to open alongside Rahul, after the left-hander was rested from the series opener.

With a series win at stake, Australia opted to field for the second game in row.

The home team got a move on in the third over of the innings bowled by left-arm pacer Jason Behrendorff. 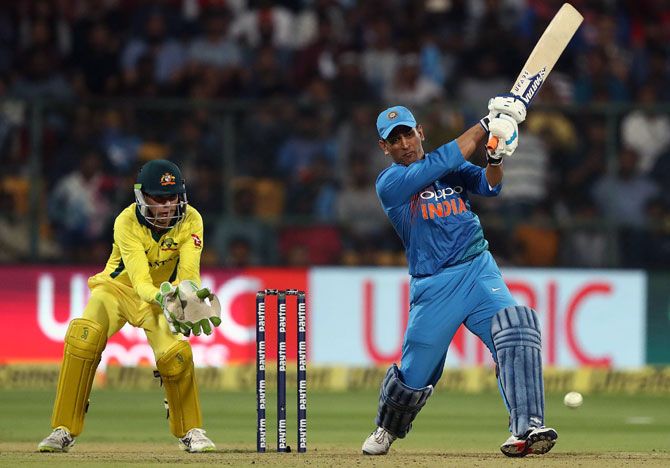 Local hero Rahul slashed a short and wide ball between cover and point before Dhawan flicked one off pads for another four with the over going for 12 runs.

The fifth over was even more productive for India as pacer Jhye Richardson conceded 15 runs after Rahul dispatched him for consecutive sixes, a top edge that flew over over deep fine leg and a crisp drive that went all the way over cover.

The stylish Karnataka batsman, who recently went through a rough patch both on and off the field, was back in his elements.

Rahul meted out similar punishment to Pat Cummins in the following over, hitting him for back-to-back sixes.

His sublime strokeplay seemed effortless but it was no mean feat to pull a bowler of Cummins' pace over backward square leg a ball after he whipped the Australian for a six over deep midwicket. India reached 53 for no loss in six overs. 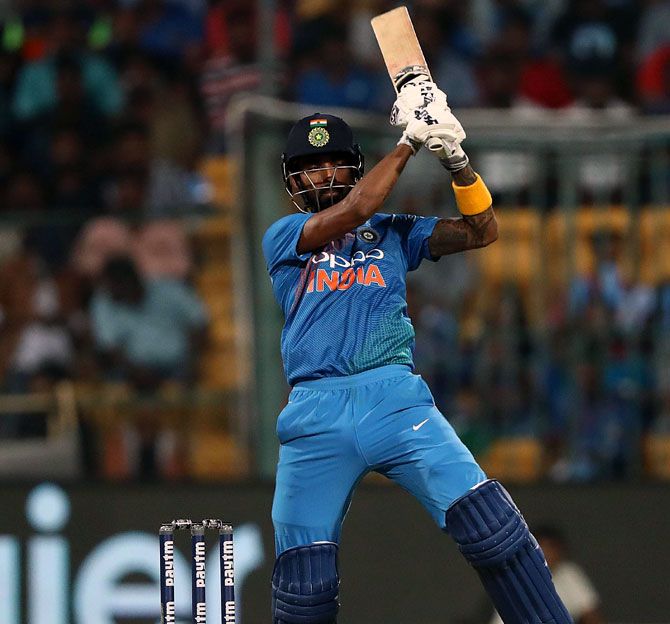 IMAGE: KL Rahul give India a flying start with his quickfire knock of 47 from 26 balls. Photograph: Robert Cianflone/Getty Images

However, Rahul fell to a soft dismissal, trying to ramp the short ball from Nathan Coulter-Nile, but was failed to control the shot and was caught by Richardson on the thirdman fence.

A struggling Dhawan too departed soon after, albeit to a questionable running catch in the deep from Marcus Stoinis after the on-field umpire referred the decision to the third umpire following his soft signal.

Rishabh Pant's early dismissal made it 74 for three in the 11th over as he mistimed one off part-time spinner Short and Richardson pulled off a sensational diving catch at long off.

Two quick dismissals brought two heavyweights -- Kohli and Dhoni -- in the middle. They enjoy batting together and that came to the fore as they completed a 50-run partnership off 29 balls.

Dhoni showed more intent from the word go as he began with a six over midwicket off Short.

Kohli kept himself busy by rotating the strike early in his innings. He went ballistic in the 16th over that leaked 22 runs as he smashed Coulter-Nile for three sixes in a row before completing his 20th fifty in the shortest format. 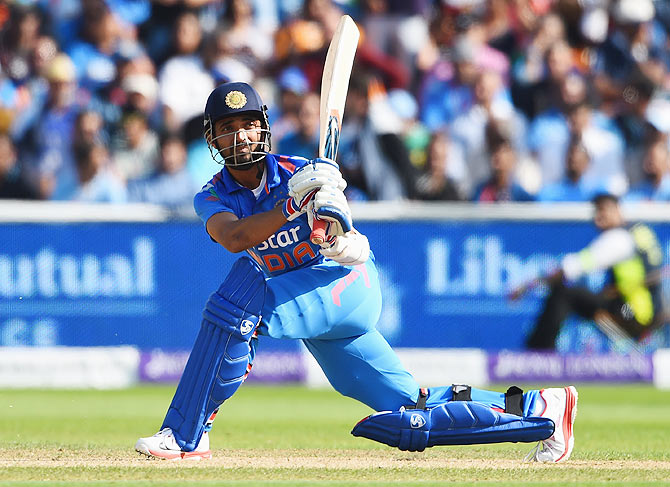