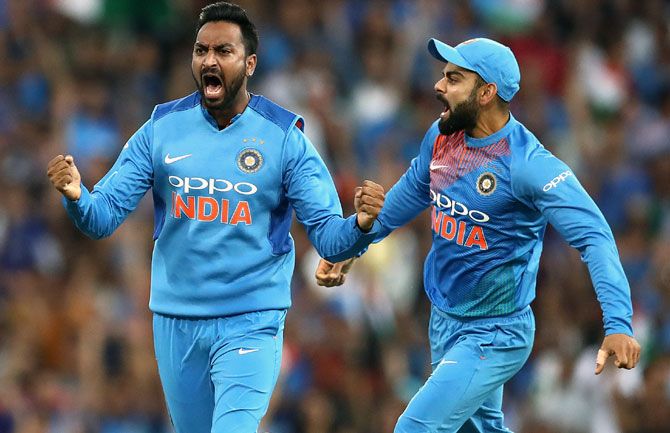 Captain Virat Kohli hit an unbeaten half-century, while Krunal Pandya picked up a career-best four-wicket haul to guide India to a series-levelling victory in the third and final T20 International against Australia in Sydney, on Sunday.

Kohli stroked 61 from 41 balls, hitting four fours and two sixes, as India won by six wickets with two balls to spare as the three-match T20I series finished 1-1. The four-match Test series begins in Adelaide from December 6.

Dinesh Karthik was unbeaten on 22 from 18 balls at the other end, as the duo put on an unbroken stand of 60 from 39 balls for the fifth wicket to carry India to victory. Australia had won the first match by four runs while the second T20 at Melbourne was abandoned because of rain.

Shikhar Dhawan had given India a flying start as he smashed 41 from 22 balls, adding 67 runs for the opening wicket with Rohit Sharma (23). 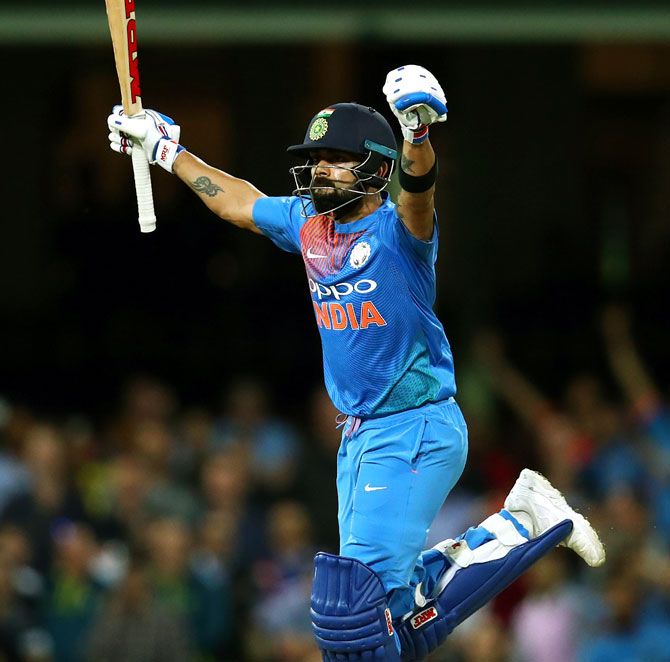 Mitchell Starc (1-26) had got the breakthrough in the sixth over, trapping Dhawan lbw via DRS referral. It put a momentary break on scoring as no runs were scored off the next eight balls, resulting in Rohit's dismissal, who played on off Adam Zampa.

KL Rahul (14) added 41 runs for the third wicket with Kohli as India crossed 100 in the 12th over, but the former started struggling for timing and was caught in the deep off part-timer Maxwell.

It became a double blow as Rishabh Pant was out for a first-ball duck, gloving behind off a slower short ball from Andrew Tye (1-32).

India were in bit of a bother at that stage, but Kohli and Dinesh Karthik (22 not out off 18 balls) brought out their shots. The latter played a perfect foil to Kohli as he struck a four and a six to bring down the asking rate. 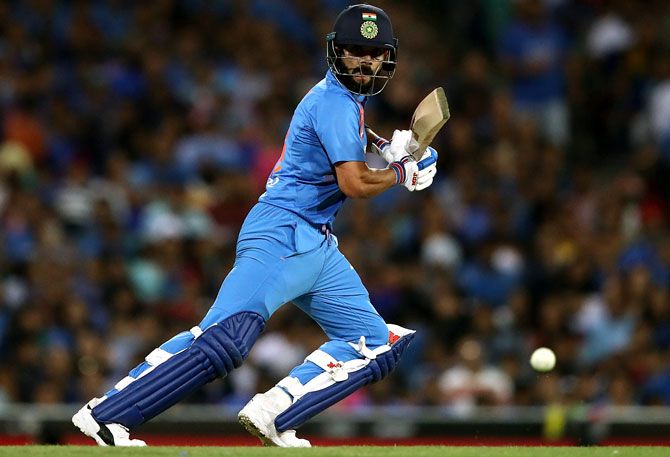 Earlier, Krunal claimed four for 36 to restrict Australia to 164 for six after the hosts had won the toss and elected to bowl.

Pandya's orthodox left-arm spin came in handy during the middle overs after the hosts had sped to 68-0 in the ninth over. With figures of four for 36, he was a tad expensive again but provided India the timely breakthroughs in the middle overs. 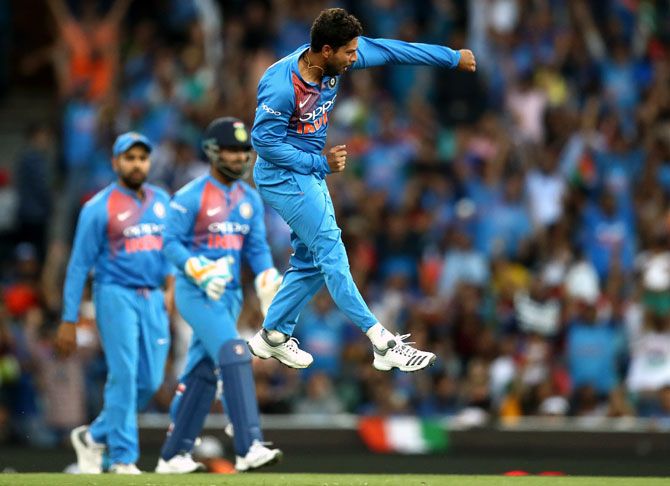 Australia, who opted to bat, made one change to their line-up with Mitchell Starc coming in for Jason Behrendorff, while India retained the same team.

Aaron Finch (28) and D'Arcy Short (33) gave Australia a good start with some positive batting in the early overs.

Pacers Bhuvneshwar Kumar and Khaleel Ahmed both proved expensive, while first-change Jasprit Bumrah was unable to stem the flow of runs, as Australia raced to 49 for no loss in six overs.

The Finch-Short partnership put pressure on the Indian fielding, shoddy again, and Rohit Sharma put down a sitter off Finch (on 22) in the eight over off Pandya. 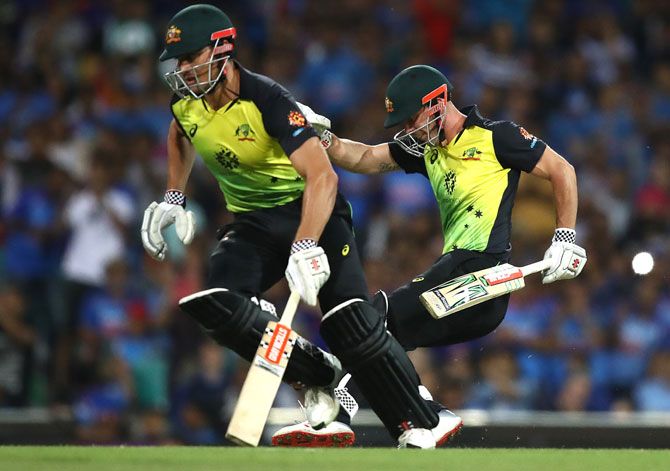 IMAGE: Chris Lynn, left, and Marcus Stoinis of Australia are caught in the middle of the pitch before the former was run out. Photograph: Ryan Pierse/Getty Images

Kuldeep Yadav provided the much-awaited breakthrough as Finch was out caught sweeping at short fine leg.

It opened the doors to the Australian middle order. Glenn Maxwell (13) survived an lbw shout via the DRS off Kuldeep, beffore Short and Ben McDermott (0) were dismissed lbw off successive balls in the tenth over as the two spinners pegged Australia back.

The quick wickets disturbed Australia's momentum and they never really recovered, losing wickets at regular intervals in the second half of their innings. They had held back Chris Lynn (13) but he couldn't provide the requisite impetus, and was run-out in the 18th over. 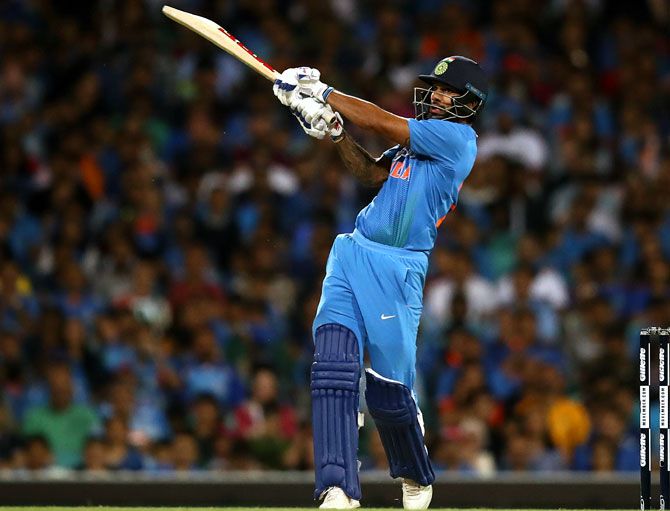 In between Pandya also accounted for Maxwell, caught by Sharma in the end, as also the vital wicket of Alex Carey (27) who held the Australian middle order together after initial setbacks.

Marcus Stoinis (25 not out off 15 balls) played an attacking cameo at the end, and put on 33 runs with Nathan Coulter-Nile (13 not out) as Australia finished with a score just above average (151) at this ground.

Australia lead the three-match series 1-0 after winning the first T20I in Brisbane by four runs (DLS). The second match in Melbourne was washed out. 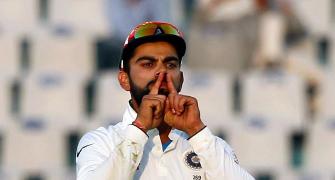 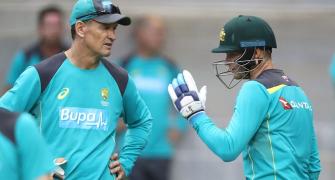 Shane Warne has a solution for the Aussies 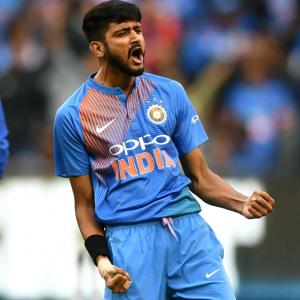