Pakistan's Saeed Ajmal flummoxed England's batsmen with his off-spin for a career-best haul of seven for 55 to dismiss the visitors for 192 on the first day of the opening Test in Dubai on Tuesday.

In reply, Pakistan openers Mohammad Hafeez (22) and Taufeeq Umar (18) survived 15 overs from the number one-ranked Test side to finish on 42-0 at the close, 150 runs in arrears.

Ajmal, whose previous best figures were 6-42, bagged his fifth five-wicket haul in Tests as England were shot out in the last session of the day. "I just tried to bowl line and length and bowl at middle stump. The ball was a little bit low," Ajmal said in a modest description of an exquisite bowling performance that humbled a top batting line-up.

England were reduced to 94 for seven at one stage before Matt Prior (70 not out) and Graeme Swann (34) stemmed the rot with a defiant 57-run stand for the eighth wicket.

"When you go in at 45-5 it's hardly time to play your shots. I'm not worried about how many boundaries I hit, it was important to build a partnership," said wicketkeeper Prior.

"I was happy to get a score on the board. It's been a tough day when we won the toss."

England captain Andrew Strauss had no hesitation in opting to bat first on what appeared to be a good batting pitch but was soon left to rue his decision as his batsmen crumbled to some smart bowling.

The pitch did not offer much turn for the spinners but it was enough for the wily Ajmal, who mixed his top-spinners and doosras to perfection.

Prior was the lone batsman who looked at ease at the crease, using his feet to the spinners regularly.

The other English batsmen were guilty of some unwarranted risky shots after being denied opportunities to score freely.

Pakistan captain Misbah-ul-Haq was quick to introduce spin in the sixth over of the morning and it immediately bore fruit when opener Alastair Cook (3) edged part-time off-spinner Mohammad Hafeez behind the stumps.

Left-hander Cook attempted to cut a delivery which was too close to him to attempt the shot.

Jonathan Trott (17) was then caught down the leg side off paceman Aizaz Cheema, getting a faint edge to a delivery which was going harmlessly wide.

Ajmal, the leading wicket-taker in Tests last year, struck immediately after he was introduced in the 19th over when he dismissed Strauss (19) after the captain played across the line to a straight delivery and was clean bowled.

Ian Bell (0) and Kevin Pietersen (2) fell in the space of four deliveries in Ajmal's next over, both fooled by the off-spinner's doosra.

Eoin Morgan, who survived a stumping chance off Ajmal when on three, tried to unsettle the off-spinner with his unorthodox sweep shots but was out lbw (24) attempting the same shot.

Stuart Broad, who has often managed to bail England out off tricky situations, did not last long either and fell to Ajmal in a similar fashion for eight.

Resuming the final session at 139-7, Prior and Swann continued to rebuild England's awful start but ultimately found Ajmal too hot to handle.

Abdur Rehman briefly stole the limelight with a brilliant delivery to clean bowl Swann with the score at 151, before Ajmal accounted for Chris Tremlett (1) and then capped a fine bowling display with the dismissal of James Anderson (12), also leg before.

In contrast Pakistan's openers made batting look surprisingly easy, though Prior said top-ranked England would rise to the challenge ahead of them.

"Of course we can come back. It's nothing new to us. First and foremost we have to bowl well and bowl them out cheaply." 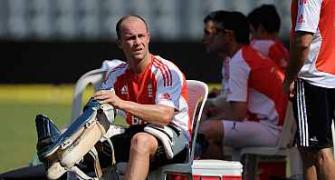 India has played better cricket in this series: Trott 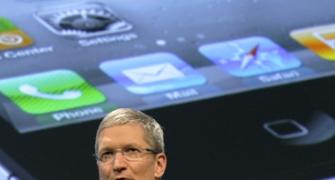 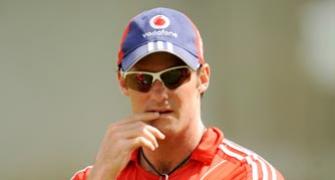 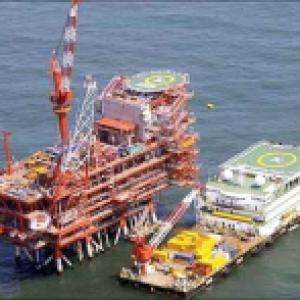