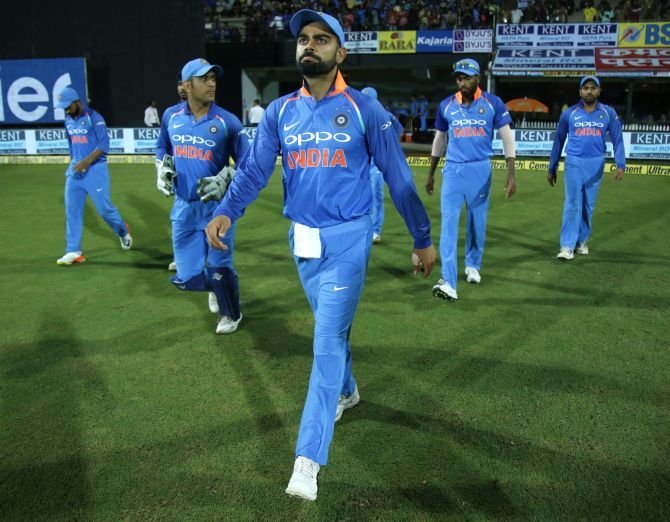 IMAGE: Captain Virat Kohli and his team make their way out to the middle. Photograph: BCCI

A confident India will look to continue their good run in limited overs cricket when they take on New Zealand in a three-match ODI and T20I series, starting in Mumbai on October 22.

India have been on a roll in ODIs and are yet to lose a bilateral ODI series in the last year-and-a-half, registering six series wins on the trot.

Virat Kohli's side has been unstoppable in the last couple of months. The Indians whitewashed Sri Lanka 5-0 in an away series and then trounced Australia 4-1 at home recently.

They will be confident of extending that winning streak against New Zealand who have struggled in India.

Of the 32 ODIs New Zealand has played in India, the Kiwis have just seven wins with India claiming 24 victories. One game finished without a result.

India and New Zealand have played each other in 98 ODIs overall. India has a slight lead with 49 victories compared to the New Zealanders' 43 wins.

New Zealand have never won an ODI series in India in five attempts.

They came close last year, but were edged 2-3 after India claimed a crushing 190 run victory in the fifth and final ODI in Visakhapatnam.

Nathan Astle is the top run getter for New Zealand with 1,207 runs with five centuries and five fifties.

Another Indian who relished playing against New Zealand was Virender Sehwag. He scored 1,157 runs in 23 ODIs which included six centuries and three fifties, at an average of 52 and a stunning strike rate of 103.

Tendulkar also holds the record for the highest individual score against New Zealand -- 186 not out in Hyderabad in 1999.

Most runs in India vs New Zealand ODIs:

Most centuries in India vs New Zealand ODIs:

Among the bowlers, Javagal Srinath holds the record for the most wickets in India-New Zealand ODIs with a rich haul of 51 wickets in 30 games.

Anil Kumble is second with 30 scalps.

Shane Bond boasts of the best bowling figures after he claimed 6/19 in Bulawayo in 2005.

Most wickets in India vs New Zealand ODIs:

Most dismissals by a wicketkeeper in India vs New Zealand ODIs:

Most catches in India vs New Zealand ODIs: