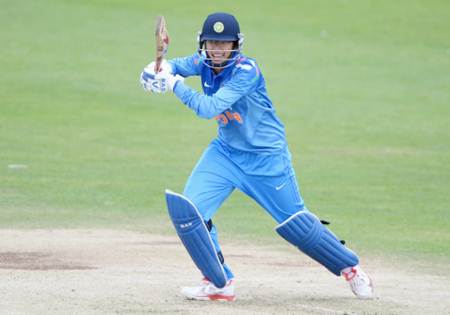 A captain's knock by Mithali Raj enabled the Indian women's cricket team beat New Zealand by eight wickets in the fourth ODI in Bengaluru and level the five-match series 2-2.

Her unbeaten 81 was the cornerstone in the team’s successful chase of 221 in only 44.2 overs.

In the process, she became the first Indian and second in women's ODI history to complete 5,000 runs, after England's Charlotte Edwards.

The chase of 221 was also the highest by the Indian women on home soil and second highest overall.

This was after Mandhana and Thirushkamini (31) gave the team a steady start with a 49 runs opening stand.

Mithali's 88-ball innings had 10 boundaries, but the most exciting part of the Indian innings was Harmanpreet Kaur's 25-ball cameo that yielded 32 runs, including four boundaries and two huge sixes.

A straight six off spinner Leigh Kasperek ended the match.

Earlier, the New Zealanders put up a decent target of 220 in 49.5 overs, largely due to a fine contribution from Sophie Devine (89) that had 10 fours and three sixes.

Left-arm spinner Rajeshwari Gayekwad, with figures of 3 for 25 in 10 overs, was India's most successful bowler, while pacer Niranjana Nagarajan polished off the tail for figures of 3 for 35 in 5.5 overs.