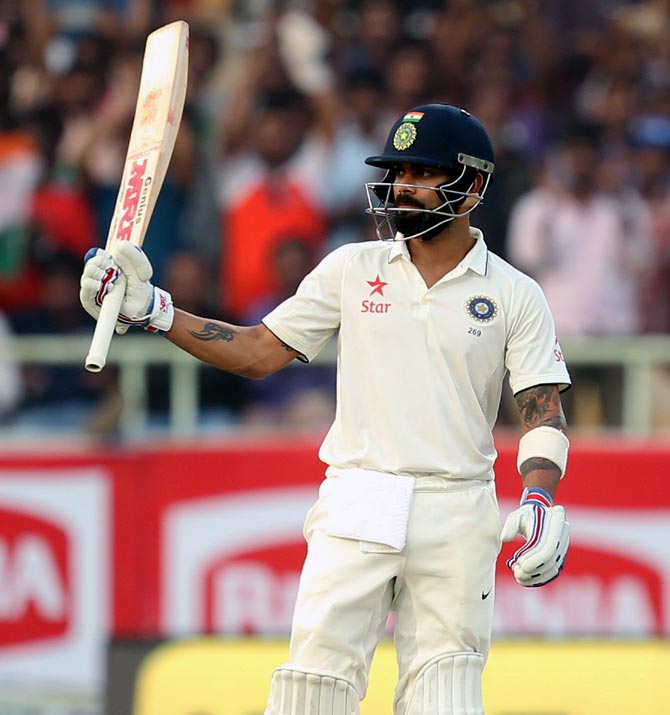 Skipper Virat Kohli batted like a man possessed, slamming an unbeaten 151 in company of another centurion Cheteshwar Pujara to steer India to a commendable 317 for four against England on Day 1 of the second Test in Visakhapatnam, on Thursday.

In his 50th Test, Kohli led from the front by striking a classy 14th hundred and also added 226 runs for the third wicket with Pujara (119), who has hit centuries in his last three matches to continue his superb recent run.

This was Pujara's 10th Test hundred. The duo made the English bowlers toil hard on an unresponsive pitch after Murali Vijay (20) and KL Rahul (0) were dismissed cheaply with the scoreboard reading 22.

Kohli mixed caution with aggression during his undefeated stay at the wicket in which he hit 15 boundaries and two sixes as he spent five hours and 52 minutes at the wicket on the opening day.

He also claimed moral victory over his old nemesis Jimmy Anderson, who claimed three for 44 in 16 overs, in his comeback match and was easily the best English bowler on view.

Anderson did try his variations but Kohli remained unruffled for the better part of his innings save once when on 56, his mistimed pull shot off Ben Stokes was dropped by Adil Rasheed on the fine leg boundary.

At the other end, continuing his purple patch after he was dropped from the second Test at St Lucia in West Indies, Pujara hit a strokeful 119 off 204 balls that was laced with 12 boundaries and two sixes.

Batting in tandem, Kohli brought up his century with a cover drive after Pujara reached his milestone with a six off Rashid. 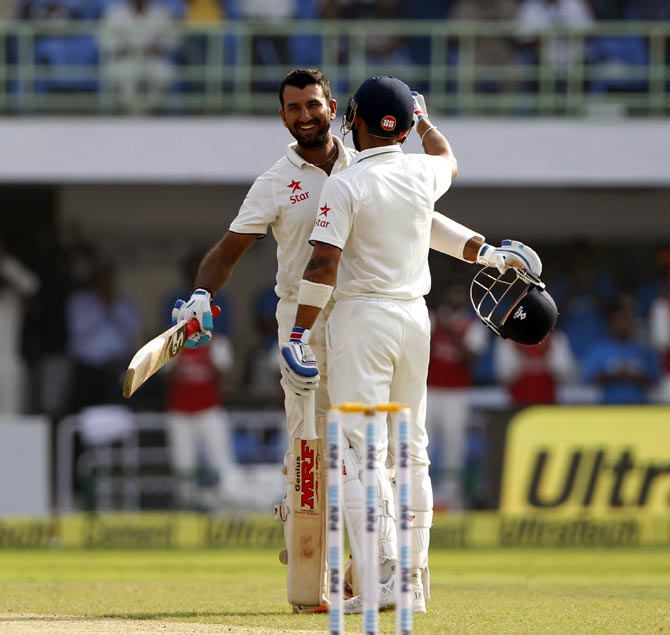 This time, after scoring his second ton against England, he resorted to subdued celebrations as he just lifted his bat, acknowledged the crowd and went about the task to grind the visitors down.

The determination and the coming-of-age of Kohli was quite evident. Ditto when he got to his 150 as he half-raised his bat to acknowledge the cheers.

It was a tough day for the English bowling attack and quite arduous for Anderson, who is recovering from a shoulder injury.

At stumps, Ravichandran Ashwin was in company of his skipper and India's healthy 3.5 run-rate would also be a cause of concern for the Englishmen.

Kohli's legend at Vizag also reached enormous proportions as he struck his third international century at the Dr. Y S Rajasekhara Reddy ACA-VDCA Cricket stadium from four ODIs and one Test as his scores before this match at the venue were 118, 117, 99, 65 (in ODIs).

He also became the sixth Indian to score a century in his 50th Test.

There were some anxious moments earlier on when English pacemen attacked Pujara with a flurry of rising deliveries and a couple of mix-ups with the skipper but the Saurashtra right-hander had his intention clear in his knock spanning four-hour and 33 minutes.

On 22, he ran for survival twice unable to match to Kohli's agility and on one instance he was midway down the pitch when the fielder had the ball in his hands.

But Pujara was firm in resolve even as he gave up his bat at the centre of the strip and dived into the crease to survive.

The Englishmen packed his offside with eight fielders but still Pujara dissected the field and found boundaries and looked effortless against the spin attack which looked innocuous.

With both batsmen in their 90s, it seemed to be a race between Pujara and Kohli to get to 100, and it was the India No. 3, who was ridiculed for his slow batting in West Indies, proved a point by hitting Adil Rashid over deep-midwicket for a six to notch his century in style.

The duo added 118 without losing any wicket in the most productive second session as they were scoring close to six runs an over and the only succor for Englishmen came in the form of a stray dog that ran on the field to force an early tea break.

The closest they came was when Kohli had a miscue on 56 but Adil Rashid dropped him at long leg, while an LBW call of Pujara was referred but none went England's way in a frustrating session for the visitors. 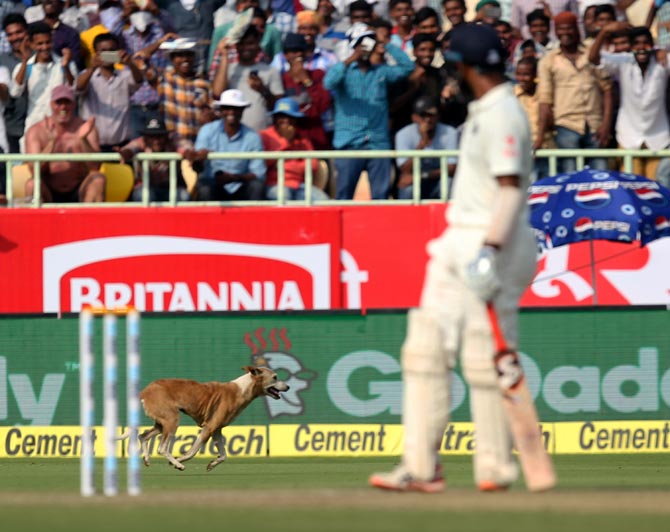 IMAGE: A dog enters the field of play during Day 1. Photograph: BCCI

For Kohli, it was another day and another century as he made his intention clear early on against the leading English wicket taker James Anderson who had dismissed the skipper five times from nine Tests, most by any bowler.

An exciting battle on the cards, Kohli was full of determination and got off the mark with an elegant boundary coming forward. An element of luck also seemed to go with Kohli who pulled Anderson and got a top edge but it fell safely.

If the first session was all about laying the foundation after India lost both the openers for 22, the second was all about the duo asserting themselves on the opposition as they added 118 runs in the session without any damage.

They relished the conditions and were at ease against both the spinners and pacers.

Pujara dissected the cover and mid-off with finesse to reach to his 11th half-century in Tests.

England packed the off-side field for Pujara with as many as eight fielders but he still managed to find the gaps and hit boundaries regularly as India scored at six runs per over in the last 10 overs before tea.

From dropping Kohli on 56 to a leg before wicket appeal against Pujara which was also turned down by DRS, nothing went right for England as they kept rotating their six-bowling spin-pace options without the desired results.

After electing to bat, India lost their openers early as KL Rahul and Murali Vijay were dismissed inside the first five overs before Pujara and Kohli steadied the ship.

Making a hurried return after he was pulled in from an ongoing first-class match, Rahul got out for duck edging Stuart Broad to Ben Stokes at the third slip, in the second over of the innings.

Murali Vijay (20) looked in fine nick and hit four boundaries en route to reaching the landmark of 3000 runs in Test cricket. But the experienced James Anderson, who was making a comeback from injury, accounted for the right-hander with a superb bouncer, which struck the gloves and looped to Ben Stokes at gully.

Broad was soon off the field after aggravating his right wrist cut that he had sustained in the first Test as Stokes came in to replace him in the eighth over.

England tested the Indian duo with rising short deliveries but Pujara and Kohli were up for the challenge.

An exciting battle between the English leading wicket taker Anderson and Kohli was on display and the Indian skipper looked to have the upper hand when he got off the mark with an elegant boundary through the off-side.

An element of luck also seemed to go with Kohli who pulled Anderson but his top edge landed in no-man's land before crossing the ropes. 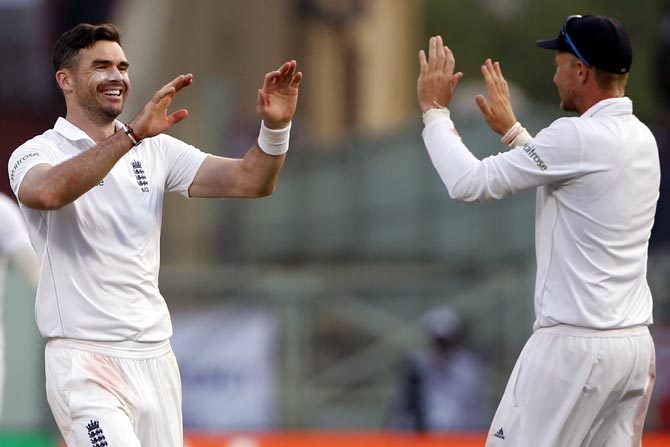 India also survived runout chances twice with Pujara at at the receiving end on both the occasions. Not among the fastest runners in the team, Pujara, was caught in a mix-up with an agile Kohli twice and fortunately for India, it did not cost them a wicket.

Captain Alastair Cook introduced spin as early as in 10th over with left-arm orthodox Zafar Ansari but without much success as the ball did not turn a great deal in the first session.

Ansari's first spell read 6-1-19-0 forcing England to bring back Broad after he had received some treatment on his injured but Kohli and Pujara looked firmly in control.

Earlier, Kohli made an intriguing selection when he handed 26-year-old off-spinner Jayant Yadav a surprise Test debut replacing Amit Mishra who had bowled a magical five for 18 at this venue in an ODI against New Zealand three weeks ago.

Incidentally, in that same match Yadav had made his ODI debut and at the same venue, the Harana off-spinner was handed India's 286th Test cap by former India captain Ravi Shastri.

That senior pro Gautam Gambhir was making way for a fit-again KL Rahul was already made clear by Kohli as India made two changes to their playing eleven.

England were bolstered by the return of their leading wicket-taker James Anderson in place of Chris Woakes who was ruled out with a knee injury. 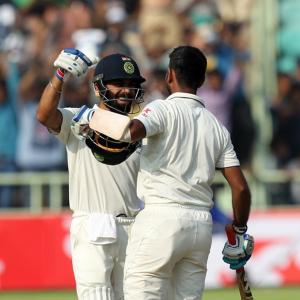 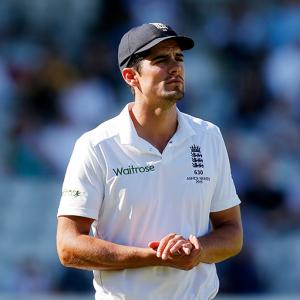