'These guys (fast bowlers) are on top of their game. When they bowl, it looks like any pitch is a good pitch. Jasprit is not a part of the attack and when he comes back, it will be a one heck of an attack to counter'

IMAGE: Mohammed Shami was the pick of the bowlers for India, picking seven wickets in the first Test in Indore. Photograph: BCCI

Indian captain Virat Kohli on Saturday termed his fast bowling arsenal as a "dream combination" that can torment any opposition on any kind of surface.

Riding on one of the most hostile fast bowling performances in recent times, India thrashed Bangladesh by an innings and 130 runs inside three days in the first Test in Indore.

Asked about India's current fast bowling resources, Kohli reminded that the team is without Jasprit Bumrah, who is undergoing treatment for an injury.

"These guys (fast bowlers) are on top of their game. When they bowl, it looks like any pitch is a good pitch. Jasprit is not a part of the attack and when he comes back, it will be a one heck of an attack to counter," Kohli said at the post-match presentation.

"They can take wickets in every spell. The slip fielders are ready as they know the ball can come any over. This is a dream combination for any captain. Having strong bowlers is the most important thing in any team," he added.

Talking about the match, he said, "Don't know what to say, it's another clinical performance. It was very professional with the bat, playing five batters with one guy taking responsibility is what we want with overseas tours coming up. Hats off to the boys!"

India's performance at home is now comparable with the Australians of the early 2000s but Kohli said the team was not playing for records.

"The numbers and records are there for everyone to see, that'll remain in the books. We haven't focused on it. We're looking at keeping the standards up, motivating the next lot of players. In that process, we're pushing up the standard of Indian cricket. We don't care about numbers at all as a team," the skipper said. IMAGE: Mayank Agarwal was man-of-the-match for his superb 243. Photograph: BCCI

Asked about Mayank Agarwal's superlative performance, Kohli said, "The mindset is simple, when you see a young guy coming in to bat in Tests I know how much time it took me to get those big hundreds, so I know the importance of getting big runs.

"It's important as a senior batter to let them know to keep going. I want them to not make the mistakes I made as a youngster to make them world class cricketers."

The Indian team will play its first ever Day/Night Test in the second and final match against Bangladesh in Kolkata, and Kohli said the players are excited about it.

"The pink-ball Test is going to be exciting, will be a challenge for the batters. With the older ball, it doesn't swing that much so the bowlers will have a challenge. We're just happy to be among the first to play pink-ball cricket for India."

Man of the Match Agarwal said it was a dream come true for him to play for India and produce this kind of performance.

"It's dream come true to play for India, grateful for the start I've got. Hope I can continue. I do practice my six-hitting but not during the Tests, but I do try and hit a few in domestic cricket," said Agarwal who made 243 in India's only innings.

"It's great to have somebody who motivates you. When I got my first 150, Kohli was at the non-striker's end and he said 'nothing short of 200 for you next'."

About the Day/Night Test in Kolkata, he said, "We've had three pink-ball sessions under lights, Rahul Dravid arranged those in Bangalore. Looking forward to the game now. It's going to be a landmark game for us."

Bangladesh captain Mominul Haque said the toss impacted the outcome of the match.

"It has been difficult. We won (the toss) and decided to bat, it was a difficult decision. But I have a lot of positives, especially Abu Jayed who picked four wickets. Mushfiqur was superb with the bat in both innings, Liton did well too," he said.

"The top order batsmen had a challenge against a very good bowling line-up, so we need to try and play out 15-20 overs. We have no experience of Day/Night Test cricket, we'll just try and enjoy that game." 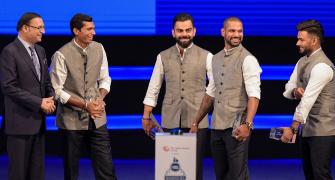