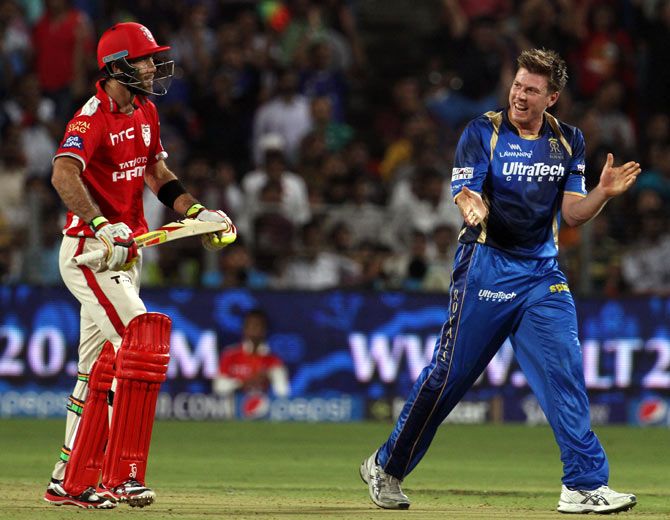 Faulkner hit a quickfire 46 from 33 balls to lift Rajasthan to a competitive 162 for seven in their 20 overs. The left-arm pacer then claimed three for 26 with the ball as Kings XI Punjab finished on a disappointing 136 for eight.

Faulkner's valuable knock, in which he hit two fours and three sixes, came when Rajasthan were gasping at 75 for five. His 51-run stand with debutant Deepak Hooda (30 from 15 balls) proved crucial in their recovery apart from skipper Steven Smith's 33-run knock from 23 balls.

Pacers Mitchell Johnson (2/34) and Anureet Singh (3/23) shared five wickets between them for Punjab. 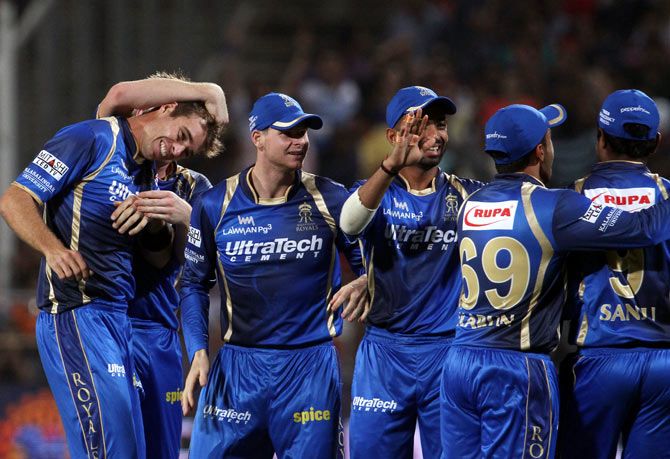 Rajasthan's bowlers kept it tight from the beginning, not giving Punjab batsmen runs freely and took wickets at regular intervals. Their fielding was outstanding and played a significant role in their win as they pulled off two stunning catches and an equal number of run outs.

Punjab got off to a horror start as Virender Sehwag was out for a golden duck and Wriddhiman Saha was run out for seven by wicketkeeper Sanju Samson.

Maxwell was victim of a sensational catch by Southee at mid-off as the tall Kiwi pacer dived full length to his left.

Opener Murali Vijay was in exquisite touch as he stroked a fluent 37 from 32 balls but even he was dismissed by a direct hit from keeper Samson. Punjab were still in the hunt with 71 needed from seven overs but Dhawal Kulkarni inflicted a big blow by removing David Miller (23), who had just hit a gigantic six off Southee in the previous over.

Their strategy of promoting Axar Patel also backfired as the left-hander struggled to get going, scoring 24 from 28 balls despite the run rate climbing up steeply towards the end.

Bailey hit 24 from 28 balls before he was dismissed by a sensational catch, involving Southee and Karun Nair on the midwicket fence. His big shot was plucked by an airborne Southee but since the Kiwi feared crossing the boundary ropes with ball in his hand, he threw it back and Nair showed immense presence of mind to catch it, diving to his right. The Australian’s valuable knock, in which he punished the rival bowlers with two fours and three sixes, came when Royals were reeling at 75 for five.

Seeing a 'green' pitch, bowling first was a difficult temptation to resist and Kings XI Punjab skipper George Bailey made the easy choice.

The going was tough and Rajasthan did not have wait to realise that as their premier batsman Ajinkya Rahane was back in the dugout without bothering the scorer.

Such was the assistance from the pitch that it was hard to negotiate the domestic pair of Sandeep Sharma and Anureet Singh in the early overs. After Anureet scalped Rahane, Sandeep trapped the other opener, Sanju Samson leg before for 5. Royals were reeling at 14 for 2.

Australia’s Steven Smith, who led the side in the absence of injured countryman Shane Watson, though, looked in glorious touch and continued his rich form of the World Cup. His successive boundaries off left-arm spinner Axar Patel released some pressure and it seemed to have rubbed on Karun Nair too as he hit the left-armer for a six in the same over.

However, the spinner had his revenge with the next delivery, finding Nair’s middle stump.

Johnson was introduced as late as the ninth over and the left-armer straightaway made an impression with some unplayable deliveries.

Smith went about his business calmly from one end before his thick outside edge off Johnson flew to Karanveer Singh at third man.

The Australian quick returned and sent back Stuart Binny, who failed to negotiate the ferocious pace and was caught behind. 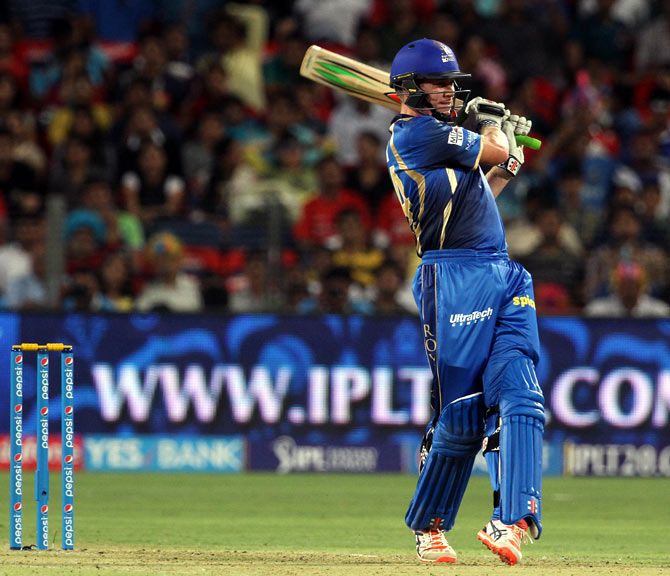 At 75 for five, Royals' innings was in disarray and in need of a saviour, who came in the form of Faulkner.

The burly Australian batted fearlessly. His strokes were laced with power and precision as he took his side to a fighting total.

He did not even spare the best rival bowler, creaming off 20 runs from Johnson's over.