Despite a good showing in the Indian Premier League and domestic season, Irfan Pathan continues to find himself in the wilderness.

Harish Kotian finds out why. 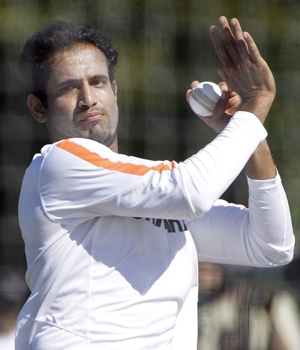 Will Irfan Pathan spend the rest of his career playing just domestic cricket?

Well, it seems so after the Indian selectors ignored him for the Zimbabwe tour despite naming a second string side for the ODI tri-series and two Twenty20 internationals.

The 25-year-old overcame recent injury setbacks and came up withï¿½a good showing in the Indian Premier League last month. He finished with 15 wickets from 14 matches and also played a stellar role with the bat, scoring 276 runs in 14 matches, to follow up on a good season in domestic cricket for Baroda.

Many expected him to feature in the World Twenty20, but with the selectors deciding on bolstering the team with spinning all-rounders, he did not even come close to making the squad.

On Sunday, when the selectors sat down to name the squad for the Zimbabwe tour, Irfan's selection should have been a formality, considering mostlyï¿½second string players were to be picked. But no; he did not even make it to the 'A' team for the tri-series in England. Little-known pacers Jaskaran Singh, Jayadev Unadkat, Dhaval Kulkarni, Sudeep Tyagi and Abhimanyu Mithun instead got the nod for the England trip.

The selectors' decision wasï¿½certainlyï¿½shocking, since the upcoming tours would have been an ideal opportunity for out-of-favour pacers like Pathan, S Sreesanth, RP Singh and Munaf Patel to make a comeback to the senior team.

If the reasons for his omission areï¿½based purely on cricketing logic, then Irfan could have waited in hope. But, it seems, there is more than what meets the eye.

If sources are to be believed, he earned the wrath of the selectors after failing to report for the Irani Cup match between Mumbai and Rest of India last October. He was named in the 15-member squad, but the all-rounder failed to report for duty, following which he was replaced by UP pacer Bhuvanesh Kumar.

It wasï¿½then that the selectors unanimously decided that Irfan would have to pay for the no-show, the sources added.

But Pathan said all those rumours are baseless as he was working on his fitness in the National Cricket Academy in Bangalore during that period.

"This is the normal procedure. Any contracted player when he gets injured he has to report to the NCA and that is what I also did. So there was no question of pulling out of the match without information as I had informed the concerned authorities and went to the NCA to work with the physio Paul Close.

"Infact before the start of the BCCI Corporate Trophy,ï¿½I played a practice match before the main tournament. [National selector] Narendra Hirwani was the coach ofï¿½Air India and I had informed him that I was going to the NCA so all these allegations are baseless that I pulled out of the Irani Trophy match without prior notice,"ï¿½Pathan told rediff.com.

The left-hander was the leading run-scorer (397 runs at 49.62) and wicket-taker (22 wickets at 18.54) for Baroda in the Ranji Trophy last season. Therefore it is surprising that he didn't even make it to the India 'A' team if not the Indian team for Zimbabwe tour.

Not so long ago, he was billed as the future of Indian fast bowling. He made a sensational start to his international cricket in 2003 and was an integral part of the squad for a couple of years before it all went haywire.

In the Greg Chappell era, he was labeled an all-rounder and often promoted in the batting order. This period witnessed the start of his decline in bowling; fitness problems also didn't help. In 2005, he was dropped from the team and, barring a few random appearances in ODIs, Irfan failed to find a permanent slot in the Indian team.

Former chairman of selectors Kiran More, who gave Irfan his international debut at the raw age of 19, against Australia in 2003, slammed the selectors for his omission.

"If not the Indian team, Irfan definitely deserved to be picked in the India 'A' team. It is most unfortunate that the selectors didn't give him a chance to make a comeback. This sends out a wrong signal to the player and it can kill his confidence," More told rediff.com.

"He has done well in domestic cricket this season for Baroda and then in the IPL he picked up wickets in every match. Tell me how many bowlers have not gone for runs playing on the flat wickets in India, but Irfan managed to pick up wickets regularly too," he added.

More believes Irfan has got what it takes to make a comeback.

"Irfan is still young and has got a great future ahead. I believe he is extremely talented, and once he gets back to his best form there would be no stopping him. I don't think you can ever stop a player from making a comeback, because your performances speak for you. So he must continue to give good performances at domestic level and force the selectors to include him in the Indian team," the former India wicketkeeper added.

Atï¿½his best, Irfan evoked comparison with the legendary Wasim Akram for his exploits with the red cherry. Now,ï¿½all that is history; he needs to reproduce thatï¿½old magic to regain the confidence of the selectors.