News
Business
Movies
Sports
Cricket
Get Ahead
Money Tips
Shopping
Sign in  |  Create a Rediffmail account
Rediff.com  » Cricket » 'When MS said he'd like to bowl first, I was little happy inside'

'When MS said he'd like to bowl first, I was little happy inside' Mumbai Indians captain Rohit Sharma has admitted that he loves to bat first and take the attack to opposition in big matches and that his Chennai Super Kings counterpart MS Dhoni's call for bowling first in the Indian Premier League final, after winning the toss, was a welcome sign.

"It was a good toss to lose. When MS said he would like to bowl first, I was little happy inside. It's a big game, you want to put runs on the board and put pressure on opposition. That exactly what happened. In big games, you would like to do that that's my preference."

Sharma, who also has an IPL century against Kolkata Knight Riders, a world record ODI score of 264 and a debut Test hundred at the Eden Gardens, looked in full flow after he came with Mumbai at 1-1 in the first over.

Rohit was named the player of the match for his effort.

'Dhoni has been a great match winner for Chennai and India' Sharma said they never went in eyeing a 200-plus total.

"We just batted normally. It was always important to have partnership with wickets in hand and get the momentum. We wanted to bat normally and at the same time we wanted to be aggressive as well. Our partnership was important as later on Rayudu and Pollard finished off well."

Things may not be going well for the Chennai captain Dhoni but Sharma backed the Indian World Cup winning captain and said he's a champion.

"There's a certain way he goes about his batting. He has been a great match winner for Chennai and India. The situation was probably not right today as he would have expected more from the openers.

"You should give credit to our bowlers for the way they restricted them as Chennai didn't get off to a good start and it always becomes difficult when you lose wickets." 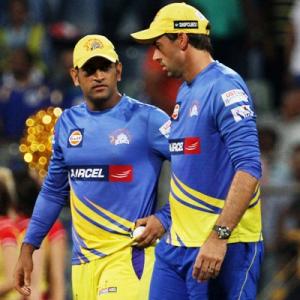 'Chennai's IPL final losses is not because of the mental aspect'