Shikhar Dhawan smashed his second half century of the season as Sunrisers Hyderabad scored an easy seven-wicket victory over Mumbai Indians in a lop-sided Pepsi Indian Premier League match on Wednesday.

Dhawan struck nine fours and a six in his 55-ball unbeaten 73 as the home side chased down the small target of 130 with two overs to spare at Rajiv Gandhi International Stadium at Uppal.

The India opener, who had an impressive Test debut against Australia in March, shared 74 runs from 9.2 overs with Hanuma Vihari (25 off 23 balls) for the third wicket as the Sunrisers reached 130 for three in 18 overs. 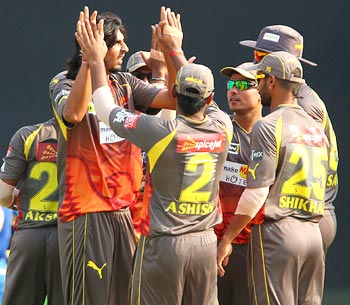 Captain Kumar Sangakkara contributed run-a-ball 21.
Dhawan had scored an unbeaten 63 in his first match of the IPL season for a lost cause against Chennai Super Kings in Sunrisers' away match on April 25.

Chasing the modest target of 130, the Sunrisers lost opener Akshath Reddy (7) in the third over with just 16 on the board. Reddy was done in by a Mitchell Johnson slower ball as he attempted to slice it over the covers but ended up ballooning in the air for Dwayne Smith to take an easy catch at covers.

Despite the early jolt, the home side had nothing much to worry about as the asking rate was small and captain Sangakkara and Dhawan finding the boundaries. Sangakkara hit the first four of his innings off his Sri Lankan compatriot Lasith Malinga in the fifth over and then finished off-spinner Harbhajan Singh with two consecutive boundaries in the sixth over.

Dhawan was also settling down well with a four off Pragyan Ojha and a six off Harbhajan after hitting two boundaries off Dhawal Kulkarni early on.

Just as the Sangakkara-Dhawan second wicket partnership was threatening to end the game early, Harbhajan struck by dismissing the home side captain in the eighth over.

Sangakkara was in two minds whether he should go for a shot or defend and he ended up spooning the ball back to the off-spinner who took a low catch. Sangakkara's run-a-ball 21 contained three fours.

The asking rate climbed a bit at just below seven an over but the Sunrisers were cruising along at 61 for two at the halfway stage and the home side virtually took the game away from the reach of Mumbai Indians by taking 15 runs from the 12th over bowled by Dwayne Smith.

Dhawan struck two sweetly-times fours off the West Indian while Vihari also found the gap for another boundary. Visiting captain Rohit Sharma shuffled his bowlers in a bid to break the partnership of Dhawan and Vihari which Mumbai could do only in the 18th over with the latter falling to Kulkarni.

But by that time, it was too late for Mumbai as the Sunrisers needed just three runs to win the match. For Mumbai, Harbhajan, Johnson and Kulkarni bagged a wicket each.

Earlier, a fine bowling performance from Sunrisers saw them restrict a star-studded Mumbai Indians side to a modest 129 for four.      Pacer Ishant Sharma (2-15) and leggie Amit Mishra (2-24) proved to be the most miserly in their four-over spells. The others too bowled economical spells with Karan Sharma and Dale Steyn conceding just 25 and 27 runs in their quota of four overs.

The duo shared an unbeaten 50-run stand for the fifth wicket to take their side past 120. Mumbai got off to a steady start with openers Sachin Tendulkar and Dwayne Smith reaching 31 at the end of four overs.

Smith opened the scoring with a four off the first ball of the innings from spinner Sharma. Tendulkar showed a touch of class hitting Steyn for two consecutive boundaries.

But twin strikes in one over from Ishant jolted the Mumbai camp, as he first dismissed Tendulkar (14) and followed it up with the wicket of in-form Dinesh Karthik for nought. The pacer went through the gap between the bat and pad of Tendulkar while Karthik was caught at point trying to play an uppish drive.

Skipper Rohit Sharma got off the mark hitting back to back boundaries. However, Hyderabad kept a check on the run flow and never allowed the Mumbai batters to flourish after electing to bat.

At the half way mark, Mumbai were 60 for two. Hyderabad's highest wicket taker in this IPL, Mishra removed both Rohit (22) and Smith (38) in the same over, after Ishant dropped a sitter from Smith off his own bowling.

Smith hit three fours and two sixes in a 40-ball knock while Rohit hit a run-a-ball 22 that included two boundaries. 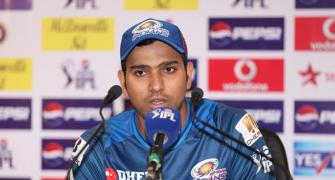 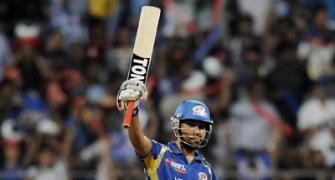 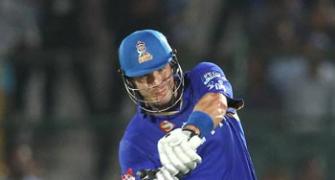 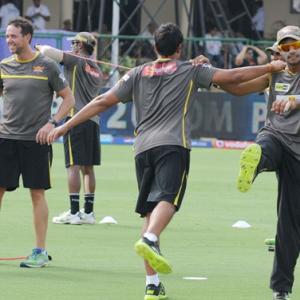 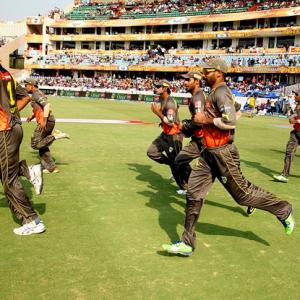